Brrrrrr. It’s cold. And as a result, I’ve been thinking about making short ribs for dinner tomorrow night. That should warm things up. Rarely have I felt the urge to make a stew-type dish since I moved to Florida, but this is the perfect time to do it. We’re supposed to have really cold weather (well, for us) for several days.

My mother used to make short ribs all the time but never wrote the recipe down, nor did I ask her for it- odd, because I love all her other recipes and still make them often. So I called my sister to see if she had ever written it down; she said no- besides, it turns out she has her own recipe- sweet and sour- which does not tempt me at all.


So I searched my cookbooks, talked to friends, went online and narrowed it down to a few recipes. Have you noticed short ribs are on menus everywhere? Maybe that's where I got the idea. I found them in the glossy food magazines and they’re in just about every cookbook I looked at- even my newest ones. Now that I think about it, my son ordered them a couple weeks ago when we were out for dinner. They seem to have transcended the seasons- they're not just for cold weather any more.


At the end of the day yesterday I was mulling over my pile of short rib recipes, watching the Barefoot Contessa with half an eye when she announced she was making short ribs for 2 friends. Do you believe it? One of my favorite chefs making a dish I was just about to try myself. They looked really good, too. So I printed out the recipe and this morning I went out and bought all the ingredients.


Ina Garten (who is the Barefoot Contessa) baked the short ribs in a hot oven to caramelize them but all the other recipes I found browned them in a pan. I am going to try her way which looks to be easier and much less messy. Another recipe in my pile suggested making them one day, refrigerating them overnight, removing the fat that has solidified on top and reheating them, saying they are better the next day anyway. Which I can easily believe, because most stews are like that. ( I plan to freeze any leftovers tonight.) To avert the too-much-grease problem, Ina suggested trimming the fat off the short ribs before caramelizing them in the oven, then she skimmed the excess fat from the top of the dish at one point.


When they came out of her oven, I could almost smell them they looked so good. I think they would be super with mashed potatoes but Ina, clever girl, served them with a cheesy corn bread that I would have made if company were coming. But this experiment is just for me (and you) and I sure don’t need cornbread! I’d end up eating it all myself. If you want to try it, go online and download her cornbread recipe- it’s called Jalapeno Cheddar Cornbread; however for this particular short rib dinner, she left out the jalapeno and the scallion. One thing the cornbread would do is add some color to your plate. I would be a little fussier about my presentation if I had company coming, so forgive me.
P.S. Did I forget to mention how they turned out? Fragrant, tender and full of flavor.


Method:
Preheat your oven to 400°.
Place the short ribs in a pan lined with foil, sprinkle with salt and pepper and roast for 15 minutes. Remove and reset oven to 300°. 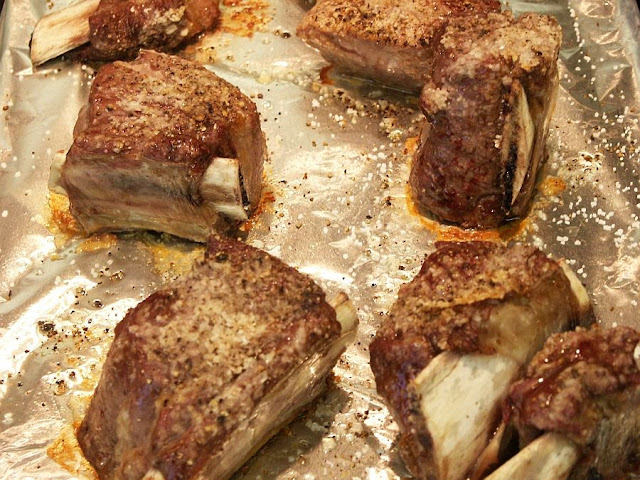 Heat the olive oil in a large oven proof pot and add the onion, celery, carrots, fennel and leek and cook for about 20 minutes, stirring once in a while. Add the minced garlic and cook for another couple minutes. Pour the wine over the vegetables and bringing to a boil, cook them until the liquid is reduced by half- about 10 minutes, although it was a little less when I did it. Add 1 tablespoon salt and 1 teaspoon freshly ground black pepper. Tie the rosemary and thyme together and put it in the pot.

Take the roasted short ribs, place them on top of the vegetables. add the beef stock and brown sugar and bring to a boil. Cover and bake in the oven for 2-3 hours or until the meat is very tender. (It took me 2 hours and 45 minutes.)
Remove the ribs (be careful, they will easily fall apart) and put them on a plate. Remove the herbs and skim any excess fat from the top. Cook over medium heat about 20 more minutes to reduce the liquid. Put the ribs back in and reheat.
Serve with cornbread or the old fashioned way, with potatoes.
Serves 3. 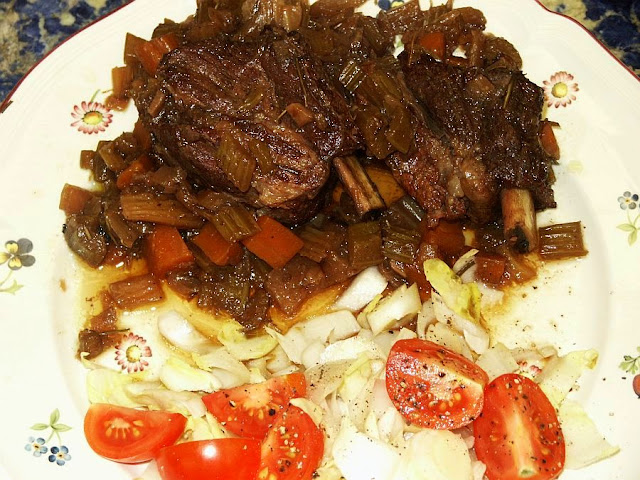