My daughter has a cat that is borderline certifiable. Don’t ask me how I know, I just do. It’s not that he’s unfriendly, just that he marches to his own drummer- and not the way most cats do. When she puts makeup on, he climbs a corner wall nearby, hangs there precariously and watches her. When she goes to the loo, he goes to the loo. Once, when taken for a meet and greet with a man who accepts cats for temporary boarding, ( for, among others, Dan Ackroyd,) she was told her cat “ does not play well with others”. After watching Tracy taking a bubble bath for a while, he decided it looked interesting, decided to join her and leapt in. (It was never repeated.) When she has to go out of town, he sits in her suitcase so she can’t pack. When she comes back, he's excited when she walks in, then suddenly remembers he's supposed to be mad at her and proceeds to snub her the rest of the day. In other words, he thinks he’s human.

When my kids were younger, we had several cats at different times so I am familiar with the ways of felines. Trust me, this one is different. He never used to be but one day last year Tracy took him to a fancy grooming service. When she went to pick him up, they had shaved him. He was almost embarrassed about it. And never has been the same since as far as I am concerned.


Her cat’s name is Prince. Not because he is one, or ever was, because I know for a fact he came from a back alley someplace- no breeding at all. But Tracy adores Prince, the singer, (who actually calls himself “The Artist Formerly Known As Prince” for some reason unknown to me) and so she named her cat after him. I doubt he would be pleased to hear it.


Just after Christmas, we were window shopping in Palm Beach and saw a funky cat doormat outlined in red in Barzina, one of our favorite shops. Gretchen, the owner, travels the world looking for fascinating things to stock her small shop; turns out the doormat is from Vietnam and she carries them in four different animal shapes. They are unusual, inexpensive and funny so we bought one for my daughter’s front door. There is a slight opening under her door and Prince is forever pushing his toys under the door and out into the hall. We thought the doormat would bring a smile to the faces of company as well as prevent the cat’s toys from shooting down the hall outside her apartment door. True to his personality, Prince took one gander at the mat, pounced on it and declared it was his personal possession. And so, no surprise, the mat remains inside the apartment, which was not quite the point; now it has to be moved aside to exit the apartment and the cat’s toys are still ending up in the hallway.
When Tracy’s away, Stu, a very kind neighbor who loves Prince
( he has many fans just like the real Prince), comes over twice a day, feeds and plays with him and in general gets him stoned on catnip. I guess this is comfort food for him. When he doesn’t have Tracy, at least he has Stu and catnip. Dontcha wish comfort was that easy for the rest of us?


All of which got me to thinking about what gives me comfort. Do we all crave special foods which make us feel better or safer or comfy from time to time? When we're worried, ill or far from home we all want the equivalent of Mother or a favorite blanket. For me it’s always things like puddings, custards or warm soup. For others, it’s mac and cheese, mashed potatoes and gravy, ice cream, and even chocolate.

I have recipes from my childhood for all my favorite comfort foods, but if I have to pick one, especially if I feel really wretched and need something quickly, it’s Mother’s egg drop soup. It can’t be simpler to make and you probably have the makings in your kitchen right now. Or if you don't you should have. It’s rather pathetic to fall back on clichéd chicken soup, but it’s the truth. Luckier still would be if you had homemade chicken broth in the freezer. We always did. My grandmother made it with (brace yourself) chicken feet. I told that story to someone years ago and have been razzed about it ever since. I thought of her the other day when I saw a package of them in the grocery store. I wonder how many people look at them and say Ewwwww! I mean they do look like little hands. But they make super tasty stock and are worth the extra effort. If you can find them in your market and you’re game to try them, just make certain they are well cleaned to begin with, then boil them briefly, drain them, cut off the claw tips and throw them in with your chicken parts.
So to begin with, here’s my basic chicken stock recipe-it’s really, really good and makes 6 quarts.

Method:
Rinse feet and bones in cold water. Place remaining ingredients in a large stock pot, add bones and cover with cold water. (About 7 quarts or so) Bring to a boil and reduce heat to simmer. Simmer for 3 1/2 hours. Strain the entire contents of the pot through a colander, pressing down on the bones and discard the solids. Chill the stock overnight. The next day, remove the surface fat. Pour into individual containers and freeze or use immediately. Do not refrigerate for more than 1 day.


( And hey! Nobody’s going to tell on you if you use canned chicken broth. It’s just not as good- and be sure to buy the low sodium. )

So now when you have a rainy day, are snowed in, feel lonely, have a cold, have the flu, need comfort food, or just plain love quick hot soups, here is Mother’s recipe for egg drop soup. It will only take a couple sentences and while my diet is not something I usually think of when in need of comfort, this one is only 81 calories a serving. Perfect.

Method:
Bring the 4 cups of chicken broth to a boil. Add the white pepper and green onions. Cook for about another minute.Very slowly pour in the eggs in a steady stream. To make shreds, stir the egg rapidly in a clockwise direction for one minute. To make thin streams or ribbons, gently stir the eggs in a clockwise direction until they form.
Sometimes, as a change of pace, you can add some flour to the beaten eggs to make a paste and then drop into the boiling broth and make tiny little dumplings. 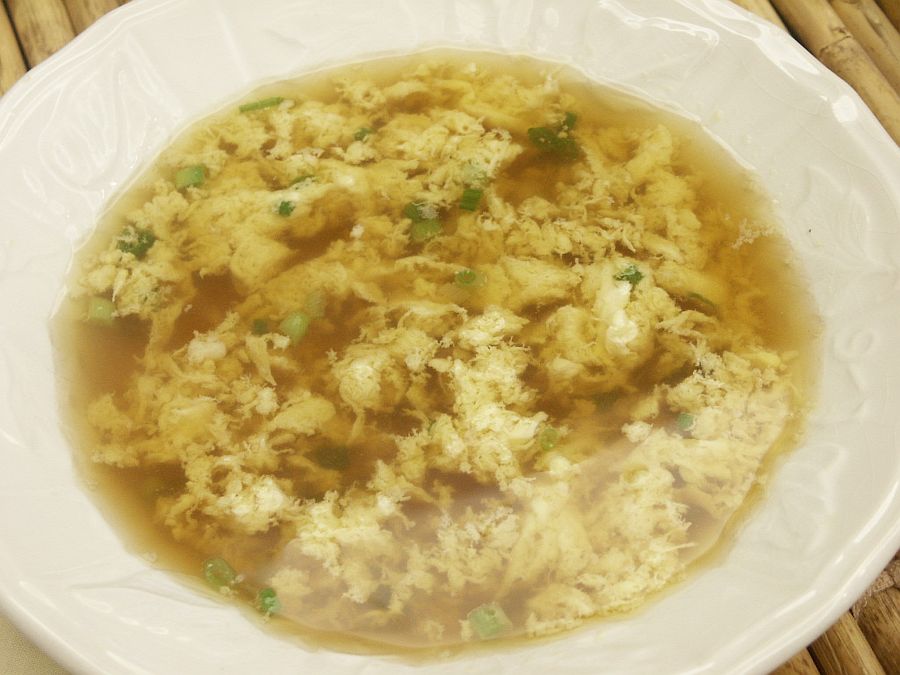