Visitandine or Financier? Did you know they were the same thing? Both describe an almond cake. And oh my, what a cake! It's sweet, nutty and has an eggshell-crisp exterior. I like them much better than their shell-shaped first  cousins, Madeleines. But then all a recipe has to say is almond flour and I'm a goner.

They've been making financiers in France for more than 100 years. The classic way to bake the financier (pronounced fee-nahn-see-AY) is in tiny round, fluted or rectangular molds. Anytime I see see them in a pastry shop in the U.S., they are called financiers. But many patisseries in Europe still call them visitandines. You can also bake it in a classic cake pan; still, the recipe is identical.

Pierre Lacam, in ''Memorial Historique de la Patisserie,'' published in 1890, wrote that the financier was created by a baker named Lasne, whose bakery was near the financial center of Paris. Presumably, the rich little cake was named for the wealthy financiers who frequented his bakery. The cake was baked in rectangular molds, the shape of gold bars.

But I've also read because butter and almonds were so pricey, that only the rich (i.e. well-financed) could afford to eat them. The rectangular shape was not as attractive as other shapes; a boat-shaped mold became favored, and today the cake can take any shape that appeals to the baker.


Now Lasne may have thought he invented these but Nick Malgieri, the director of the baking program at Peter Kump's New York Cooking School, said a similar cake made with nuts, egg whites and brown butter existed even before that. It was made, he said, by nuns of the Order of the Visitation and was called a visitandine. (The visitation referred to in this case was the one made by the Virgin Mary to her cousin Elizabeth, before Elizabeth gave birth to John the Baptist.) The cakes don’t derive from an ancient Hebrew recipe, but were originated in the convent of a community of French nuns called the Sisters of the Visitation, colloquially known in French as the "Visitandines.


Which of these stories is correct? Your guess is as good as mine.


No matter the name, the cakes have a nutty flavor from the browned butter and are perfect served with coffee or tea. And you'll often find them served with a spoonful of jam on top or even a raspberry stuck in the top before baking.

If you make Visitandine in cake pan form, you could eat a wedge just as is, but it's also lovely with some fruit. Lucie at Bilingual Butter had a wonderful post about it recently. Reading it was what tweaked my interest. And Dorie Greenspan weighed in on it too.  The recipes are slightly different than the one I used, but the cakes all are divine.

Is this a difficult recipe? Not really. All you need is a whisk, a bowl and a pan. A few steps make or break the cake. The first, browning the butter, is what defines its flavor and adds depth to the almonds. Remove it the moment it attains the color of a chestnut. The second trick is to mix the batter as little as possible. It should be stirred until just blended. If you stir too much, the gluten in the flour will get overworked and the cake will be tough. And the batter has to rest a few hours in the refrigerator before baking.

Vistandine (or Financiers)
Adapted from Francois Payard of Payard Patisserie 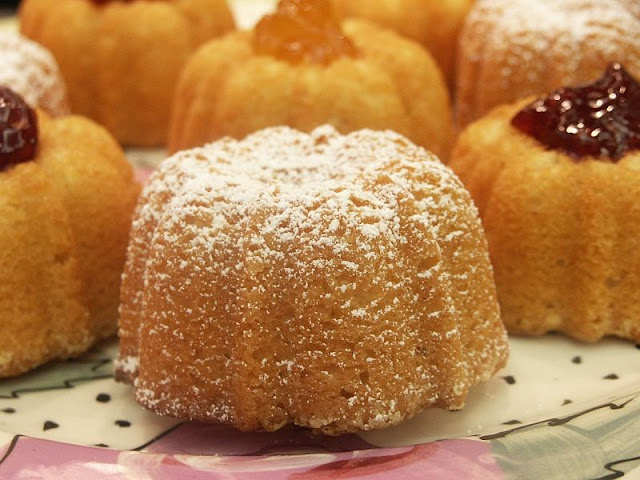 With a pastry brush, butter  thoroughly butter the financier molds. Arrange them side by side, but not touching, on a baking sheet. Place the baking sheet with the buttered molds in the freezer to resolidify the butter and make the financiers easier to unmold.


In a small pan over medium low heat, heat butter, occasionally swirling, until it begins to brown, about 5 minutes. Set aside.

Sift sugar over almond flour. (If using whole almonds, process with sugar in a food processor until mostly fine.) Add both flours, salt and baking powder, and gently whisk to combine. Add egg whites one at a time, whisking just to combine. Do not overwork or the cakes will be tough.

Add vanilla to butter. In a steady stream, whisk butter into flour mixture. Cover with plastic wrap, and refrigerate 3 hours.

Remove molds from freezer. Spoon mixture into a pastry bag that has a 1/4-inch round tip. Pipe mixture into molds, filling halfway.


Bake 18 to 20 minutes, until browned and springy. Remove from oven, and cool 2 minutes before unmolding. Cool completely on rack. Serve plain or dusted with powdered sugar, or warm, with ice cream.

(Storage: Keep the cakes loosely covered with plastic wrap on the day they are made. For longer storage, transfer them to a tin or plastic container with a tight-fitting cover in one layer and refrigerate them. Bring them back to room temperature before serving again. I froze some just to see what happened and, while not as good as fresh, I would not have been embarrassed to serve them to company.)

Photo credit for the rectangular financiers: http://dessertfirst.typepad.com/dessert_first/2009/04/honey-financiers.html
Posted by Barbara at 9:47 AM 65 comments:


We're back and we had a wonderful time! I'll do a post soon on the trip.
I find out tomorrow about the wrist. Keep your fingers crossed for me....I am sick and tired of this cast!
Will be visiting all of you ASAP.

I hate to say this in print, but September is nearly upon us. Good grief. And in September I am hosting a coffee and meeting for 40 women which means gracing my table with muffins and sweet breads. I'm getting really bored with my old standbys so have been searching for some new and unusual recipes. And did I ever hit the jackpot with my new Ottolenghi cookbook. What a gem! 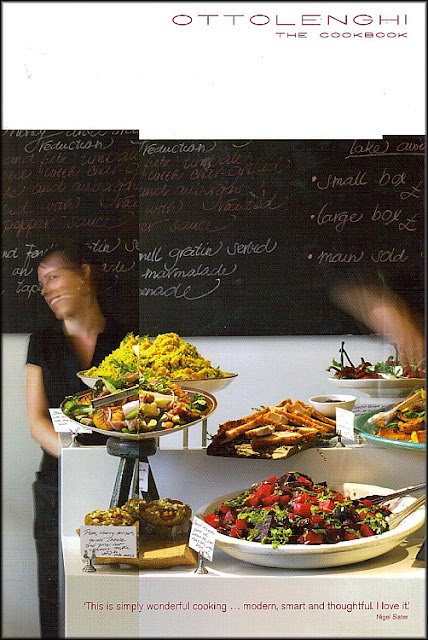 I found two to use, but the Pear and Amaretto Crumble Cake was my first experiment. Doesn't that sound wonderful? I made two small cakes with the recipe and gave some to two of my most trusted critics...they'll be totally honest.

This crumble cake is moist, has the most marvelous flavor and is filled with lovely sweet fresh pear chunks. Comfort food. Fabulous with tea or coffee. And I got enthusiastic seconds from my friends. So that's #1. I still have one more to try in this book and then I think I will also serve financiers. And maybe some really delightful creamy lemon bars for those serious sweet lovers.  Do you think perhaps I should add some healthy fruit? 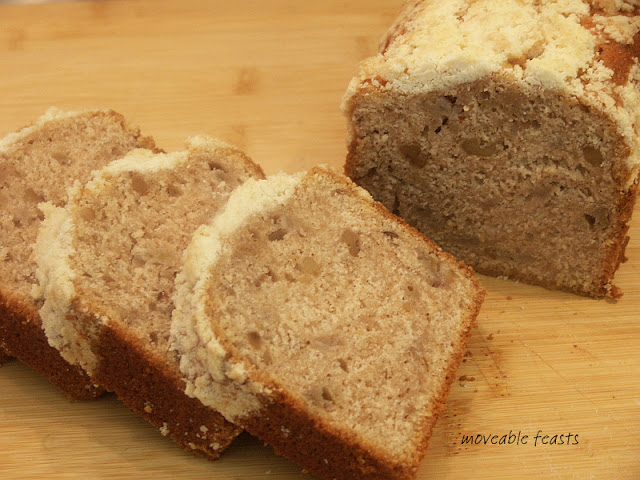 Method for the cake:
Preheat oven to 340°.
Grease two small loaf pans and then sprinkle with fine bread crumbs


Beat the eggs whites with the salt until stiff peaks form. Fold into the batter carefully. Divide into the two loaf pans and top with the crumble. Bake for 40-45 minutes or until a cake tester comes out clean.


Method for the crumble:
Mix the flour, sugar and butter together in a bowl only until the butter is incorporated. If you beat it too long, it will turn into dough.


Last but not least, The End of Summer Giveaway Winner: The lucky winner is: Sam from  My Carolina Kitchen. Congratulations, Sam! Please email your mailing information to bsmithw@gmail.com so I can get your delicious fruit jams in the mail today!


Thanks everyone, for all your kind comments regarding my broken wrist. I am constantly amazed at the caring and support that pours forth from our blogging community for even the most minor problems (which this is).  You are the best!  :)

We're going on a short vacation to the Turks and Caicos. Providenciales to be exact.

Ahhhhhh. Will you look at that! Pink sand and vivid blue ocean.

Can there possibly be a down side? Well, yes, three. #1: it's hurricane season and August and September are when they tend to hit Florida and the northern Caribbean. And # 2? I'm going with a cast on my arm! Damn.  Last but not least,  I won't be visiting your blogs until I get back. I need a rest from everything. I know you'll understand.

But I'm going to leave you with two things:

From American Spoon in Northern Michigan, my old stomping grounds, I give you their summer gift package.

Please go to their website to check out this wonderful company. I was there when they started as just a little storefront in Petoskey. How they have grown!
This is a perfect way to celebrate the end of summer....with a gift assortment of the fabulous fruits of the Michigan summer to cheer you with warm memories through the long winter ahead!
Flavors include: Early Glow Strawberry Preserves, Red Haven Peach Preserves, Blueberry-Lime Preserves, Leelanau Apricot Preserves, Sour Cherry Preserves, Bartlett Pear Preserves, Neva Betta Whole Wheat Crackers and Neva Betta Original Crackers.

To win, just leave a comment and if you become a follower, you'll get two entries! (Please leave a separate comment for each.) U.S. only, please.
I'll announce the winner on August 25th.
And the last thing I'm leaving you with? A lovely little recipe that I've made for years and years. You can get the kids to help you make them on a rainy day. Make a bunch and freeze them. It just can't get any simpler than this. And do they ever taste great. Shades of the 60's!


Method:
Preheat the oven to 400 degrees F.
Drain the olives well, and dry them completely with paper towels. Set aside.Combine the other ingredients in a bowl and mix well until a dough forms. You can knead it with your hands, if necessary, until it has the consistency of play-dough.Pinch off a small amount of dough, flatten it, and wrap it around a dry olive. Being careful not to squeeze the olive, pinch off any excess, then roll it in your hands until smooth. Continue until all the olives are covered.

Bake for 15 minutes, or until golden brown. OR freeze, wrapped tightly, and they will last for months. Bake straight from the freezer for 20 minutes.
Posted by Barbara at 6:38 AM 82 comments: