I seem to be all hung up on hot soups right now. Probably the bone cold weather we’re all having. Yes, I live in Florida, but it’s plenty cold here right now too- things are relative. Our 50° is the north’s 20°. Although anything relative to the north’s minus 40° probably will never happen in Florida. But we did get cold enough for snow in the mid 70’s; really- I was there- I was driving the kids to school. Still, our homes just aren’t as well insulated as the northern homes are- the cold sort of oozes in around windows and doors.

My son and his family in Michigan are right in the middle of this wretched weather, although for some odd reason, he never complains to me about it- neither does my daughter who lives in New York City. I do know my son would love to move to Florida if he could do the following: 1. Sell his home and 2. Find a job down here. If these two things happened (unlikely in Michigan’s economy- well, in everyone’s economy right now.) he would be down here in a flash. I also know his daughter would like to graduate with her high school class in Clarkston and that will happen in 2010 so it’s coming fast. When his friends express surprise at his wish, they forget he was raised here from the time he was 9, so it seems like home to him. And his brother is living down here too.


Michiganders (and the far north in general) turn out some of the best soup-makers around. When I lived there, I had an enormous repertoire of hot soups and my sister, who lives there still, has homemade soup nearly every day for lunch. I am still watching my weight after my splurges over the holidays so I have been searching for low cal, healthy soup recipes.


Several months ago I was watching Nigella Lawson on some channel or other and she threw together a soup that looked delicious, comforting and low cal. I printed it out but have not had the chance to try it until this week. I had a couple lunch guests coming for a meeting and decided to try it; we only wanted a light meal so I thought this would be perfect. The point of the recipe is to use whatever you happen to have in your refrigerator; of course, Nigella just “happened” to have Udon noodles ( I found them in our Whole Foods store.) and also had bok choy, ginger, bean sprouts and mushrooms handy. I don’t keep those items on a regular basis so had to make a trip to the store; but I think her point was you could substitute other noodles for the udon noodles, or regular mushrooms for shiitake- just use what you have. Nigella can turn even soup-making into a sexy event- cooking while in her bathrobe and giving a sly wink and grin when she takes a mouthful.
If you get a "snow day" perhaps you could give this soup a try. Hopefully you will have some of the ingredients in your pantry; if not, improvise! It's the flavor of the broth that counts so stock some star anise and ginger.
It barely takes any time at all to make this soup and the star anise gives it a slight licorice flavor; you certainly can omit it if you like, but I find it an unusual and delicious addition. I served it along with some toasted whole wheat pita pieces sprinkled with sesame seeds. The entire lunch had an Asian flair. Everyone smacked their lips in delight and asked immediately for the recipe. 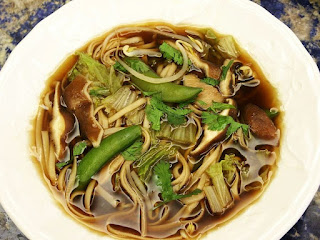 Method:
Place the stock, brown sugar, star anise, ginger and soy sauce in a saucepan. When the soup comes to a boil, add the noodles. Once these are nearly done (read the noodle package for instructions- udon noodles take about 4 minutes)) add the bean sprouts, mushrooms, sugar snaps and bok choy. These vegetables will be done in 3 minutes. Pour the soup into two bowls and top with cilantro, if desired.
Posted by Barbara at 3:12 PM