We’re on a countdown to the Super Bowl. The one time you can be a couch potato with impunity. Also, it’s the one event where Americans can eat their favorite foods without guilt. Men take the lead at this party, and their tastes have set the tone for the snacks as well as the entertainment. Would you believe this is the second biggest snack day of the year? Second only to… you guessed it… New Years. There are going to be lots of parties in lots of homes so whether you are having one, going to someone else’s, or just watching the game at home with your family this a big day for food- all kinds. And for your buddies who aren’t into football, the Super Bowl is a great excuse to get together with friends at the end of the very boring month of January. Sometimes it’s fun just watching the half-time show and mega-bucks commercials.


This is definitely a portable food event. A buffet is the only option; nobody wants to be sitting down at a table to eat when they'd rather be screaming at a television set or two. I wanted to catch you before you hit the grocery store and give you a new recipe to try - not one of the heartier snacks like Buffalo wings, pizza or chili - but a dip. Not only is this a really good dip, but (dare I say it?) a healthy one, too. Don’t get me wrong, I like the old standbys: clam dip, spinach dip, crab dip and 7 layer dip. And while I know eating smart and healthy just isn’t in the cards for Super Bowl parties, it might be fun to offer a refreshing new dip that is not only flavorful but healthy too.


Listing those old dips just now brought to mind a funny old TV episode. Do you remember that 1993 Seinfeld show in which George Costanza is confronted at a funeral reception after dipping the same chip twice? We laughed, but honestly, didn’t it make you hesitate just a little the next time you saw a dip at a party? I even put a small spoon in my nut dishes now.

Luckily, my recipe is more a spread than a dip- so if you stick a small cocktail knife in the dish, everyone will spread it on- no double dipping. I like to serve it with some toasted pita triangles. Make it on Saturday- then the flavors will have had time to meld. The men in my family especially like this because it’s spicy and the women like it because it’s basically a veggie, it’s unusual and a snap to make. All you need is a food processor; the only thing that takes a little time is the peeling and cubing- which really takes no time at all. Roasting gives the vegetables tons of flavor and then you just dump it all in the processor. You really need to try this- I kid you not. 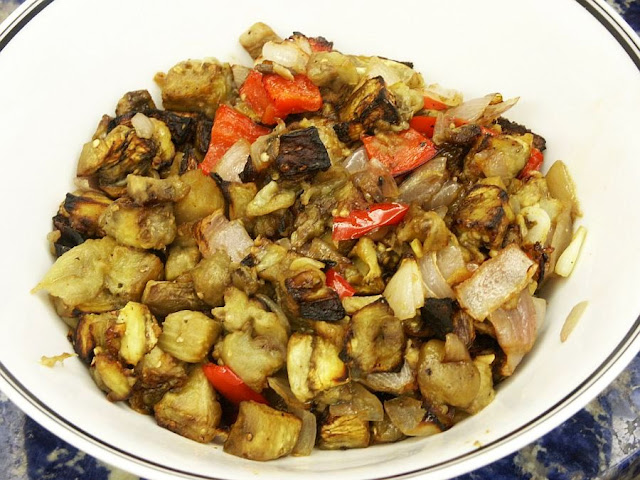 Pour all the vegetables into a food processor, add the lemon juice and tahini and pulse until blended. Add the chopped parsley and blend briefly. Put the eggplant mixture into a pretty bowl, garnish with a sprig of parsley and serve with toasted pita triangles. 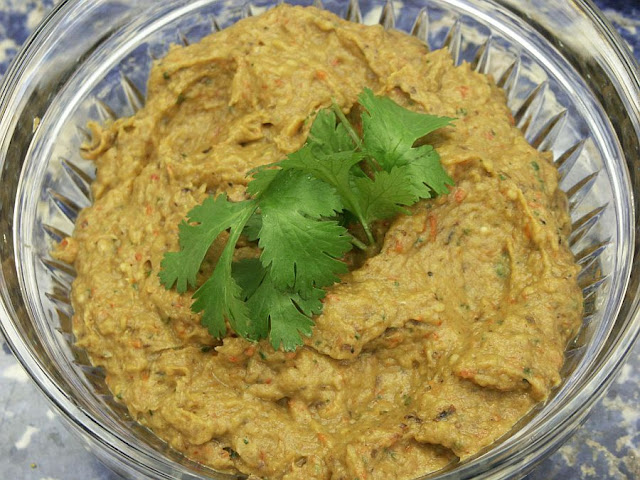