Diana Kennedy was born in 1923 in Essex, UK. When the war broke out in 1939, Diana was not yet old enough to join any of the services, but when she turned 18 in 1941, she, like everyone else, had to join one of the forces. Either the Army, the Navy, or in her case — The WTC, The Women's Timber Corps. ( A British civilian organization created to work in forestry replacing men who had left to join the armed forces.)

"And because I would not salute anybody, I had to join the Timber Corps."
(Diana is famous for her tart tongue and quick temper, which obviously was in evidence way back then.)

She emigrated to Canada in 1953 and after four years, felt it was time to move on. On her way to visit a friend in Jamaica, she stopped off in Port au Prince, Haiti. There was a revolution going on.
"And there were all sorts of guards in the airport, with their guns. [So I went to the hotel], and the first person I saw was Paul. And he was to be my future husband."

Paul Kennedy was a New York Times correspondent and after their marriage in 1957,  they lived in Mexico. So not only did Diana have a new husband, but she found her calling. She developed a great interest in Mexico and its food and began to study, cook and write down Mexican recipes and ingredients.
In 1966, they moved to New York. Paul died of cancer in 1967.

At the suggestion of Craig Claiborne in 1969, Diana started teaching Mexican cooking classes in New York. An editor heard about them and asked her to write a book.
"I said okay, but I can't write," Diana recalled.

She sent in her first pages, and then came down to Mexico to do further research, deciding to rewrite the book. The editor read the result, then called and told her, "Diana, what did you do over the summer? You taught yourself how to write." 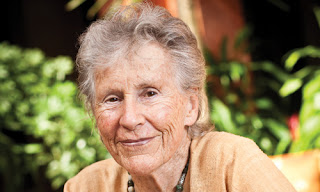 Published in 1972, "The Cuisines of Mexico" carries the dedication, "To my beloved Paul, who was my reason for being in Mexico in the first place."  She was referred to back then as, coincidentally, a "Game-Changer" because our understanding of Mexican food was never the same after that book was published.

Diana spent more than half the next 7 years travelling intensively to do research for future books. She says that every book has reflected a different time of her life. You will discover in all of Diana's books a respect for Mexico and Mexican cooking.
"You can see why a cookbook is so difficult and so laborious," she said. First there's the research, then the cooking and only after everything has been fully tested can the writing happen."

Her last book was about the cuisine of Oaxaca in southern Mexico. When asked if she was going to do yet another book she said: " I’d like to make a pact with the devil. I’m very old. No, I don’t think I would do another. What I’m going to do now is direct my attention to the uses of the edible wild plants, whether they be flowers, fruits, leaves, roots—whatever. "

Diana has also talked a bit about doing a book about Michoacán, her home since 1980. It's an adobe home on seven acres, mostly wild. Gardening is organic -- "There's no need not to be" - and nothing is wasted. Anything that can't be fed to the chickens goes to the compost pile, and, if it can't be composted, it's carted off to a sanitary landfill.

In 2003, Diana traveled to England to receive the Member of the British Empire from Queen Elizabeth, awarded for improving British-Mexican cultural relations as well as her environmental activism.

Because I love cookbooks, I found it interesting to read about which are her favorites:
"The ones I cook from are The Cooking of Southwest France, by Paula Wolfert, and her Eastern Mediterranean.
Obviously we all go to Julia Child for the details.
And [some of what] Jacque [did] in the early days, Jacque Pépin.
Oh, and, Maida Heatter’s cookie book. I think that’s a phenomenal book! So I’ve done a lot of those, but I always have to reduce the sugar and put more fat in it.
Oh, another book that I love and I use, I cook all from it, is Carol Field’s The Italian Baker. It’s a phenomenal book. All the breads, the different pastries. You know, I cook. I’m a cook. People don’t realize that, but everything in my kitchen, I make. Pickles, everything. I’ve got pickled lemons, I’ve got English chutney — everything, I make. And that, to me, is the test of a cook — to know how to do everything. So all my bread, I make everything. I’m a cook."

Diana is known for her withering appraisals of competitors. The "Julia Child of Mexican Cuisine" is not a celebrity television chef, or a restaurateur with customers to pamper so I guess it's not necessary to be nice.
"She is a dogged, obsessive pop anthropologist who has spent the past 50 years traveling to some of the most remote corners of 'my Mexico,' as she calls it, wrangling home cooks to reveal their secrets with the imperial attitude." 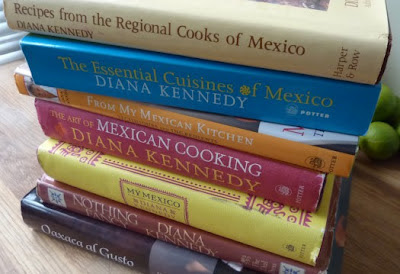 One interviewer was visiting and relates: "All the while, Kennedy complains. She complains of flu. She complains about poblano peppers from China and apples from America. "Outrageous!" She isn't happy about the state of her chicken house. She regrets deeply the rise of the Mexican industrial tortilla. She calls her gardener lazy. Warns us twice about the toilets. Gets really mad when someone tries to serve the women first. She apologizes for being prickly but doesn't stop."
In David Kamp's 2006 book about the foodie revolution, "United States of Arugula," there is a funny passage about Rick Bayless meeting Kennedy for the first time in Mexico. "She did everything but just chew me up and spit me out," Bayless recalls. "I'd never been so poorly treated by any person. She said, 'This is over, I think we're done,' and kicked me out of her car and left me on the road. I had to walk back to town."


This dish reminded me of an old favorite my MIL used to make. A roasted fruit compote...which I posted HERE. It's composed of caramelized fruit, topped with sour cream to cut the sweetness. It takes about 2 hours in a slow oven. I consider Diana's dish the Caribbean version, as it is made with pineapple and bananas rather than canned peaches and dried apricots.

The mixture is quite watery to begin with and nearly fills a baking pan. I used one that was 9 by 11 with sides about 2 inches. It also bakes in a rather (I thought) hot oven (350) for 4 hours. I kept a close watch on it not knowing what to expect. About 2 hours into baking, I lowered the oven temp to 325. Still, even then, it was easily done in three, not four, hours. You need to do quite a bit of stirring the last hour and a half to keep it from burning around the edges. When it got extremely thick and dark in color, I removed it from the oven. The flavor is amazing. Diana suggests serving it with creme fraiche, but if you don't have any, use sour cream. I like my MIL's dish served a bit warm with cold sour cream and think ideally this should be served that way as well.

In the cookbook, Diana tells about being introduced to this dish by her first Mexican maid, Luz. She neglected to ask her for the recipe and after much searching, finally it found years later in an 1895 cookbook published in Guadalajara. 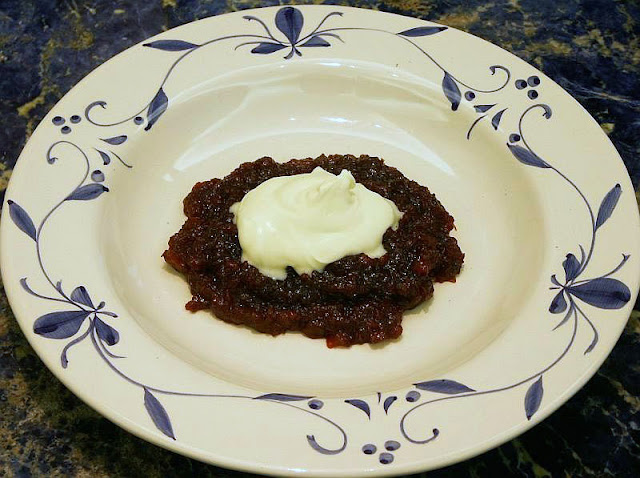 Method:Pre-heat the oven to 350.
Boil water, sugar and cinnamon stick together for 20 minutes. Liquid should be reduced to about 2 1/2 cups. Remove the cinnamon stick.
Clean, peel and dice the bananas and pineapple.
Puree all the prepared fruit with the syrup in a blender or food processor, to a medium texture.
Put the puree in a roasting tin and add the second piece of cinnamon and the lime zest and juice. Place in the oven.
Leave to cook for 4 hours, periodically scraping down the sides of stirring with a wooden spoon until the mixture becomes a rich dark brown.
Remove from the oven, cool  and serve with  queso fresco or thick sour cream.

Bench notes:
Can be kept in the fridge for up to 2 weeks
The cooking can be started on the top of the cooker to speed things up, but it must be stirred all the time to avoid burning.