Harumi Kurihara was born in 1947 in Shimoda City in Shizuoka Prefecture, a coastal city in Japan. As a child, she watched her mother in the kitchen so acquired cooking skills naturally without having to make much effort.

In 1973, she married Reiji Kurihara, who was a TV newscaster. During her marriage, they often had visitors from the TV industry and Harumi used to cook for them. One of them asked Harumi to work for a TV program and in 1983 for the first time she started to work as an assistant for a cooking TV show.
In 1989, six years after she started working, she published her first cookbook “Kondate ga 10 Bai ni Naru Tare no Hon” (“A book on various kinds of sauces to enjoy your dish in 10 versions”). This book was highly praised and many cookbooks followed. During her 20-year career as a cooking writer, she has published 115 books with a total number of copies printed exceeding 22 million and has introduced more than 4,000 original recipes. In February 2005, her first English cookbook, “Harumi’s Japanese Cooking,” was published  and was named the best in the World Asian Cuisine Book 2004 and also won the Best Cookbook of 2004 in the 10th Gourmand World Cookbook Awards, known in the culinary world as “the Oscar for Cookbooks”.

In addition, she began publishing the quarterly recipe magazine “Suteki Recipe” (“Nice Recipe”), the first personal magazine in Japan and one that has introduced her lifestyle as well as her cooking. The total number of issues published in 13 years has reached 52, which is unusually large for a personal magazine published in Japan. It introduces cooking recipes as well as interiors, gardening, and other things to make your life enjoyable.
Harumi Kurihara has become one of the best-known cooking writers in Japan. Her recipes are full of her original ideas and are loved by many people of all generations. 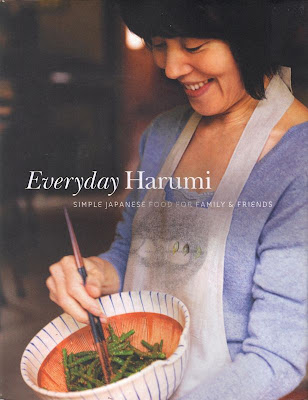 She also runs “share with Kurihara harumi” shops (55 branches in Japan) dealing with her original tableware, kitchen items, interior goods, aprons (she has designed over 100 aprons during her career), and clothes and manages “Yutori no Kukan” restaurants and “Café Yutori no Kukan” cafés (a total of 13 restaurants and cafes in Japan).
The recipes she has introduced over the years have come out of her love for her family and her wish “to make delicious meals for them.”  Harumi has never stopped being a “shufu” (housewife), even after she became busy as a cooking writer. She has always tried to introduce her recipes from the viewpoint of an ordinary housewife. Her recipes can be made using leftover food in the refrigerator or ingredients that everyone has in the kitchen.
Kurihara has often been called the "Martha Stewart of Japan". Great Britain has Nigella and Delia, we have Martha Stewart and Australia looks to Donna Hay. Japan, in turn, has its own domestic goddess – Harumi Kurihara.

Speaking through a translator, Ms. Kurihara said she thinks of dishes as belonging to one of three flavor families: soy, salt and mayonnaise. (The mayonnaise, spiked with rice vinegar and soy sauce, provides a creaminess that traditional Japanese dishes rarely have.)
In addition "there is no Japanese cooking without myoga," Ms. Kurihara said, picking up a graceful shallotlike bulb that is related to ginger.

Harumi is by all accounts unassuming, encouraging and actually still cooks dinner for her husband. She says: "There are lots of little happinesses to be found in everyday life."

Luckily, I already owned the above cookbook because I was short of time this week and needed a quick and easy recipe. This one fit the bill...quick to make and absolutely delicious. The teriyaki sauce is thick and scrumptious. I made them stove-top, but you'll love these made on the grill this summer. It'd be great as meatballs too. I mixed pork and beef in the little burgers, but you don't have to. Be sure to load on the sauce before serving. 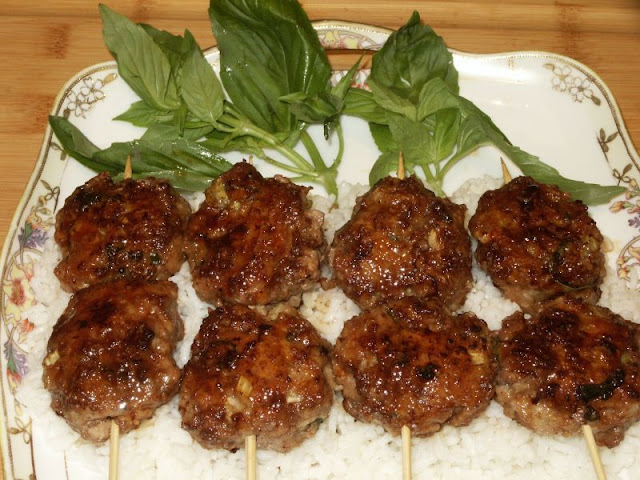 small onion, peeled
1 stalk celery
5 ounces ground beef
5 ounces ground pork
salt and pepper
1 medium egg
2 tablespoons flour
5-6 basil leaves
For the sauce:
1/2 cup soy sauce
1/2 cup mirin
4 tablespoons superfine sugar
Vegetable oil for frying
Shichimi togarashi or chili pepper, sansho (or szechwan Pepper) and sudachi wedges (or lemon)
Method:
To make the sauce: Combine soy sauce, mirin and sugar and bring to a boil. Turn down the heat and simmer for about 20 minutes until thickened. Set aside.
For the tsukune:  roughly chop the onion, remove any stringy parts of the celery and chop it roughly.
Add all the remaining ingredients except basil and knead to combine well. Chop the basil and add right before cooking.
Shape the mixture into rounds about 2 inches in diameter. Drizzle a little oil in a pan and heat. When hot, add the tsukune and cook until nicely browned on both sides.
While still hot, dip them in the teriyaki sauce and sprinkle with shichimi togarashi and sansho, according to your own preference. Serve with sudachi or lemon wedges and rice on the side.