No doubt the name of our final game-changer is familiar; we've all either heard about or seen the movie Julie and Julia, based on the book, which was based on Julie's blog.

Fittingly, Julia Child was our first game-changer and so Julie Powell is our last.
I want to thank Mary from One Perfect Bite for hosting this amazing and educational series.  I also want to thank all of you, who took the time to wade through extra long posts and comment when I know what busy lives you lead.

Good blog friend Val from More Than Burnt Toast has kept a list of everything we've done in these 50 weeks. Wow! I'm putting the link HERE so you can go back and check recipes. I'll also add it to my sidebar. Thanks, Val!

Researching the 50 women has been an extraordinary and enlightening experience and these women have inspired us to extend our comfort zones to include cuisines from around the world. It's also been fun meeting other bloggers and reading their take on the Game Changers and the recipes each has chosen to feature. I've been so impressed with all of them.
I sincerely hope that you've enjoyed meeting Gourmet's 50 women Game Changers too.
Kudos to you, Mary!

Julie Powell was born in 1973 and raised in Austin, Texas. She attended Amherst College, graduated in 1995 with a double major in theater and creative writing. With an eye for adventure Julie and her husband to-be, Eric, moved to New York City, where Julie  worked a variety of temp jobs. She and Eric married; he was an editor of Archaeology magazine.

During Julie's last job with the Lower Manhattan Development Corporation (which was responsible for distributing funds post-9/11) she created a unique blogging project, "The Julie/Julia Project". This was a blog chronicling her attempt to cook all the recipes in Julia Child's famous cookbook, Mastering The Art of French Cooking. This was a huge undertaking for two reasons: Julie barely knew how to cook an egg and she had a small poorly equipped apartment in Queens.

Her blog audience slowly grew and it resulted in a book deal for Powell with Little, Brown and Company. Powell reformatted the work she had done on her blog and crafted the 2005 published book Julie and Julia: 365 Days, 524 Recipes, 1 Tiny Apartment Kitchen . (The book was later retitled Julie and Julia: My Year of Cooking Dangerously)

Julie's popularity led to a movie deal for an adaptation of her story in 2009, making the movie we're all familiar with, based on her weblog. Julia Child was reported to have been unimpressed with Powell's blog, believing her determination to cook every recipe in Mastering the Art of French Cooking in a year to be a stunt. Child's editor, Judith Jones, said in an interview:

"Flinging around four-letter words when cooking isn't attractive, to me or Julia. She didn't want to endorse it. What came through on the blog was somebody who was doing it almost for the sake of a stunt. She would never really describe the end results, how delicious it was, and what she learned. Julia didn’t like what she called 'the flimsies.' She didn't suffer fools, if you know what I mean."

Shortly after she finished writing Julie & Julia, in which she speaks adoringly of her "sainted" husband, Eric, Powell and her husband both had affairs that nearly destroyed their marriage. 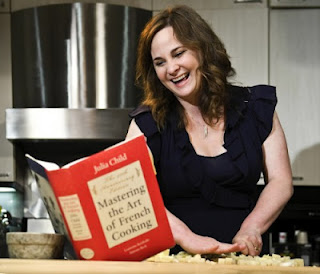 Powell's second book, Cleaving: a Story of Marriage, Meat, and Obsession details the effects on her marriage of the affair,  as well as her experiences learning the butcher trade. Powell calls her affair "the thing I used to pull my marriage apart for a while, but I do not recommend infidelity as a way of dealing with marital problems. It did turn out to be the thing that made us examine what exactly was going on and rebuild our marriage."

She and Eric are still together. They have no children. With her marriage on firmer ground, Powell is ready for a new challenge: She's writing a novel.

"Fiction was what I always wanted to write, but it's early days on that," Powell says. As for the story line, "food plays a big role. It's sort of about our various neuroses about food. My glib description of it is that it's a post-apocalyptic comedy of manners set in New York."

This final post certainly gave us a multitude of recipe choices! All of Mastering the Art of French Cooking. :) I chose to feature a very simple dish, using an ingredient I love. Fresh, crisp leaves of Belgian endive are most often found in tossed green salads but also commonly used as a vehicle for dips. Unfortunately, it's a pricey little vegetable, but a little goes a long way. I add some endive to my salad every day. You'll find after 2 hours in the oven, the whole cigar-shaped heads result in a slightly bitter, yet buttery flavor and a silky texture. Braised endive, an easy side dish that goes beautifully with fowl or veal, gives you a chance to surprise your guests and it's great for the holidays, a welcome counterpoint to cranberry sauce and the sweeter side of the buffet table. 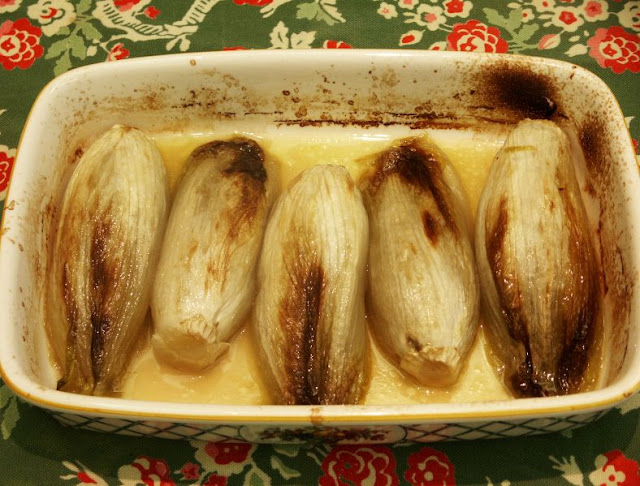 Method:
Arrange endives in single layer in casserole. Add salt, water, juice, and
butter. Spread waxed paper over to keep them moist and to prevent burning.
Cover and simmer slowly on top of stove for 20 minutes or until almost tender
and liquid reduced to half. Cut a piece of parchment paper to fit over the endive. Bake in 325° oven for 2 hours or until pale golden and almost all liquid is gone.