Zarela Martinez was born and raised on a cattle ranch in the Mexican border town of Agua Prieta in the Mexican state of Sonora.  Her mother, Aida Gabilondo, authored a cook book so it's no surprise Zarela learned the secrets and recipes of Mexican cooking by watching her talented mother. She graduated from El Paso’s Loretto Academy and attended finishing school in Guadalajara.
She began cooking professionally in El Paso in the late 1970's. She married, had twin boys, parented two step-kids and opened a catering business.

1983 was a big year for Zarela. An encounter with chef Paul Prudhomme (who became her mentor) while taking a cooking class in New Orleans led to her being invited to cook for an event at the renowned Tavern on the Green restaurant in New York, alongside such culinary luminaries as Alice Waters and, later, Wolfgang Puck. Then New York Times food editor Craig Claiborne published several of her recipes under the heading “Memorable Dishes from a Mexican Master Chef."  Another big break followed the same year when she was invited to cook for then U.S. President Ronald Reagan. She designed the food menu for Queen Elizabeth II at California’s Ronald Regan Ranch. That's quite a list of achievements in one year; Zarela was making a name for herself.
That same year she left the border (and her rocky marriage), loaded up the station wagon and with her twin sons, drove to New York and a dream of having her own restaurant. She once said she was so determined to make it in the Big Apple that, if need be, she would sell burritos in Central Park.

But there was no need to go that far: Zarela's reputation preceded her and she quickly made her mark as menu-designer and later executive chef for Cafe Marimba, "the first serious attempt to recreate the regional cuisine Mexican as authentic as possible in New York."  A loyal following of diners and food writers responded eagerly when she decided to start her own restaurant, Zarela, in 1987. 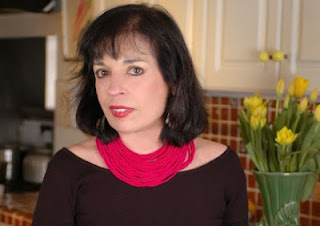 " I was attempting to cook contemporary interpretations of Mexican food. Then after I had traveled around Mexico extensively, I asked myself, Why reinvent? Since then I’ve dedicated myself to exposing New Yorkers to Mexico’s rich culinary heritage, and I think I’ve been successful."
In her continuing commitment to bringing regional Mexican food to New York, Zarela has launched a program for the Mexican Cultural Institute called Food is Arte with ongoing events designed to promote Mexican culture through its food and traditions from different states in Mexico. Her mission is to make her culture known and understood; Ms. Martinez has recently been named to the board of the Mexican Cultural Institute. Her website www.zarela.com is an invaluable resource for lovers of Mexican food and culture and her how-to videos on basic Mexican cooking techniques and flavor principles featured on www.youtube.com are fun and informative.

Zarela has always been dedicated to good health. She walks up and down the stairs of her home (Her home is a beautiful 4-story brown stone in midtown Manhattan and is full of Mexican and Latin American art, retablos, and talavera. She also collects cloth napkins from every city and state she visits in Mexico.) at least ten times a day plus walks everywhere as part of her health routine. Zarela also embraces a unique exercise program of pilates, martial arts and  Xi Gong yoga that strengthens mind and body. She loves to sing, dance, entertain and has always loved to have people in her home. She cooks no matter what the mood. Doors have opened and chances have been taken and success achieved with Zarela’s robust appetite for life.

In February of 2011, "I slowly came to the realization that I needed to close my restaurant Zarela after 23 years. But the last two years have been hell—the economy shot, rent increased to  27,000 a month, prices of goods kept  rising, customers short of money and getting there Mexican fix at taco trucks and a slew of small, inexpensive restaurants that have popped up all over the city. I started to doubt whether regional was the right food for the time." Zarela found jobs for nearly all her employees, who she considers family. As well as the economy, there were also some personal problems: Zarela had been diagnosed with Parkinson's Disease.

She now says she’s gone from being a notable food star to being the mother of rising Food Network star Aarón Sanchez. (Sanchez was born in El Paso and studied culinary arts at Johnson and Wales University before beginning his career as a chef at Patria in New York. He's the co-star of Food Network's hit series Heat Seekers and Chopped and is the chef/owner of Centrico Restaurant and Tacombi, located in New York City, as well as Mestizo Restaurant, located in Kansas City. Aarón is among the country's leading contemporary Latin Chefs.)

Zarela downplays her health concerns, because she hasn’t let them stop her. She has a larger-than-life personality matched with uncanny business savvy, and is tenacious to the core. She came to New York as a single mother with just enough money for the down payment on an apartment, and reinvented herself as a Latina culinary trendsetter. She says she will continue catering, teaching, making presentations and public speaking. "I always tell women to have other options in case they lose their job and I practice what I preach. I have been lucky to make my career as chef, consultant, and businesswoman an never-ending source of joy and fulfillment.”

Zarela Martinez Cook Books:
Food from My Heart – Published in 1992, the book was nominated the James Beard Foundation as the best book of the year.
The Food and Life of Oxaca – This cook book was published in 1997 and got positive reviews for fabulous Zarela Martinez recipes.
Zerala’s Veracruz – Published in 2001, the book was the escort to the PBS series ‘Zarela! La Cocina Veracruzana’.
Awards and Honors:
New York Association of restaurants has awarded Zarela Martinez for her remarkable service to food industry.
She has also been awarded for her business ventures by Hispanic magazine.
In 2006, Zarela Martinez has received "The Orgullo de la Comunidad” award along with her family for the Coalition for Hispanic family.

For Zarela Martinez, I chose to make a definitely out-of-season Pumpkin Cheesecake. :) It was part of a Mexican Thanksgiving dinner served at Zarella by she and her son, Aarón Sánchez. It was totally ambrosial. And after all the pumpkin cheesecakes I've made, I had to stop and consider why that was. Could it be the condensed milk? The results were silky smooth. The pumpkin seeds made for a good crust too. I sprinkled some toasted ones on top.
Be sure to save the recipe for next fall...it's a winner. 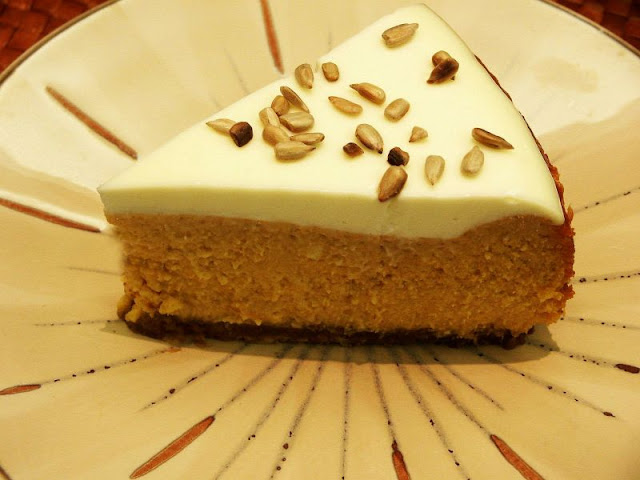 Method:
Preheat oven to 325 degrees.
The crust: Combine pumpkin seeds, graham-cracker crumbs, spices, and sugar thoroughly in food processor and pulse; add the butter and pulse until combined. Line a 10-inch springform pan with the mixture, and bake for 12 to 15 minutes until set. Set aside to cool.

The cheesecake: Reduce oven to 300 degrees. Beat cream cheese with sugar in a mixing bowl. Stir in pumpkin purée and spices. Add the eggs and yolk one at a time, beating well after each addition. Add condensed milk, and beat until thoroughly combined. Transfer to the prepared springform pan, and bake for 1 1/2 to 1 3/4 hours. Allow to cool for 30 minutes. Combine sour cream and sugar thoroughly for the topping, and spread evenly over the top of the cheesecake. Bake for 15 minutes, allow to cool, then refrigerate. 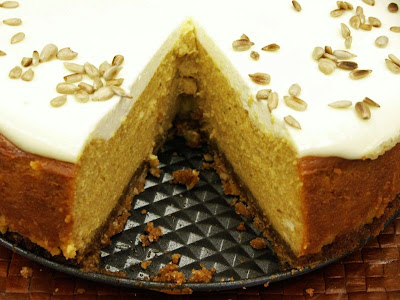