Donna Hay is a household name in Australia. She's a hugely popular cookbook author (She's authored 14 bestselling cookbooks), has her own glossy Donna Hay Magazine (which I subscribe to) and a weekly cooking column in News Ltd newspapers across the country. As long ago as 2001, The New York Times ran a glowing story on the Australian headed, "Look Out, Martha Stewart: A Rival from Down Under". 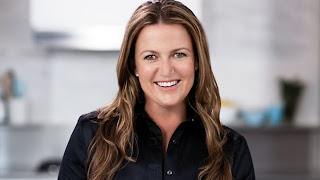 She is reportedly a perfectionist at work. Friends and associates speak with awe of her drive and ambition. "I want it all," she says. "What do they say? You're a long time dead." Hay is said to be better at pastry-making than people management. Critics and fans agree that Hay is formidably talented and hard-working but she is tough and she can be difficult for those who work with her.

After graduating from high school, she failed to qualify for a physiotherapy course, so she enrolled in home economics and loved it. The youngest of three sisters, and given free rein in the kitchen and her grandmother's vegetable garden, she also attended cooking classes in school holidays and by the age of 14 had assumed the role of head chef in the family.

Hay worked in the Women's Weekly test kitchen, then as a freelance food stylist before becoming food editor of the Australian edition of Marie Claire magazine. During this time, she produced four cookbooks. The recipes were short, the layout clean and the food photographed in natural light on white plates against white backgrounds.

In 2001, she persuaded Rupert Murdoch's News Ltd to finance Donna Hay Magazine in return for running her cooking column in the group's Australian newspapers. Hay, whose title is editorial director, has creative control of Donna Hay. In March 2011, Hay's first television series, Fast, Fresh, Simple, began on The LifeStyle Channel. It's a 13-part series that features many of the recipes from her book of the same name.

Ms. Hay rises early and  works marathon hours - partly because she has difficulty delegating. Hay's life partner, Bill Wilson, is painted as "saintly and long-suffering", but everyone says he adores her. They have two sons. "Having a child has really chilled me out a little bit," she says. "A lot. It's given me another dimension to my life." Others are amazed at this comment. When Hay returned from maternity leave, half a dozen people, including the magazine's co-founder, Vanessa Holden, left the magazine.
Holden was seen by some as the mastermind behind Donna Hay. While Hay was the culinary wizard, Holden was the inspired designer and wordsmith who pulled everything together behind the scenes. Holden says she eventually left because she felt used. She was fine with the fact that Hay was the face of the magazine but felt she deserved more credit for her own contribution. Hay believes almost all the unhappiness at the magazine stemmed from the conflict between her and Holden. "Because Vanessa and I were best friends, it was like going through a divorce for everyone," she says.

Nonetheless, the magazine continues (as does Ms. Hay's success) and is an absolute delight visually. I look forward to each issue.

The salad I chose appealed to me because I love crispy polenta and teaming it with chorizo, tomatoes, spinach and mozzarella is brilliant. It's a simple salad to make and really a meal in itself. 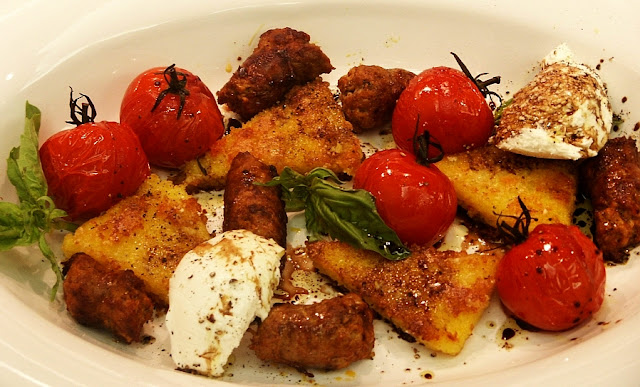 Ingredients:
3 cups chicken stock
1 cup instant polenta
4 tablespoons butter, chopped
1/2 cup grated Parmesan
sea salt and cracked black pepper
EVOO, for drizzling
15-20 cherry tomatoes
2 chorizo, sliced
2 1/2 cups baby spinach leaves
350 grams buffalo mozzarella, torn
For the dressing:
2 tablespoons white balsamic or white wine vinegar
2 tablespoon olive oil
1 clove garlic, crushed
Method:
Preheat oven to 425. Place the stock in a saucepan and bring to a boil. Gradually whisk in the polenta and cook, stirring, for 2-3 minutes or until thickened. Remove from heat and stir in the butter, Parmesan, salt and pepper. Pour into a lightly greased 9 by 13 baking pan. Refrigerate for 45 minutes or until set. Turn out on a cutting board and cut into wedges. Place on a greased baking tray and roast for 15 minutes or until golden and crisp. Set aside and keep warm.
While the polenta is roasting, make the dressing. Combine the vinegar, olive oil and garlic and stir to combine.
Place the tomatoes and chorizo on a baking tray, drizzle with olive oil and roast 3-5 minutes in the oven until chorizo is crisp and the tomatoes are tender.
Serve with the polenta, spinach and mozzarella. Spoon the dressing over everything to serve. Serves 4.

Claudia - Journey of An Italian Cook
Alyce - More Time at the Table
Posted by Barbara at 6:45 AM