Betty Fussell is first and foremost a writer. She has been writing articles and books for 50 years on the subject of what it is to be an American, first looking at movies and theater and then at food. I really like what interviewer Cheri Sicard had to say about Betty:
"Fussell is a writer who is also a home cook, one who loves the sensuousness of words as much as the sensuality of foods. As a writer, she sees food as a window into the culture, past and present, of America. As an historian, she sees any meal as a way of eating history on the plate. As a cook, she likes recipes that are simple, improvisatory, fresh, and tasty, something anyone could do with no more than a sharp knife and a skillet and a few good fresh ingredients." 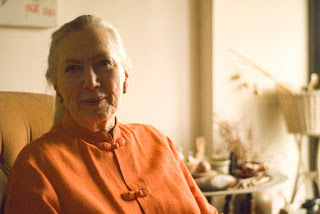 Betty was born in Southern California in 1927. She ended up with a PhD  In English lit, married her childhood sweetheart Paul Fussell and taught literature and film  at Columbia University. In the 1980s she left teaching to write full time. Her first book was a biography of Mabel Normand. Since then, she has won fellowships to MacDowell Colony, Millay Colony for the Arts, Yaddo, Villa Montalvo, Hawthornden Castle International Retreat for Writers and Djerassi Resident Artists Program.
Moving on to food writing, Betty is best known for the book I Hear America Cooking  and she authored The Story of Corn, an in-depth study of the plant as a crop, religion, and culture. She considers corn the basis of American cuisine. Betty says: "I didn't know how complex, how ancient, how complicated this subject was. I am still immersed in it years afterwards because there's no end to it---corn is in everything". This book won her the International Association of Culinary Professionals' Jane Grigson Award.

Her latest book, Raising Steaks: The Life and Times of American Beef, takes a stab at how America's past and future is inexorably linked with its iconic beef dish of choice.

In 2007 she won a James Beard Foundation Award for Journalism for “American Prime” in Saveur’s Steak Issue of July. She was recently celebrated, along with other winners of the Silver Spoon Award, by Food Arts Magazine

Unfortunately, she also wrote a book called My Kitchen Wars, about her decades-long marriage and its breakdown. To be frank, I have no interest in reading it. (Let me know if you've read it and what you thought.)
Over the decades, her essays on food, travel, movies, theater and the arts have appeared in scholarly journals, popular national magazines and major newspapers. Critical and scholarly essays have appeared in literary publications She has lectured at museums, universities, cooking schools, food & wine associations, state fairs, corn festivals and steak workshops all over the country
For a complete list of betty's books click HERE.


When I did the recipe search for Betty, I was thinking in terms of the holidays, so Betty's famous recipe for Popcorn and Venison Sausage Stuffing would have been quite timely. Sorry about that! Well, you can save it for next year. :)
Anyway, I was intrigued when I read about a stuffing recipe made with popcorn. As it turned out, it was an excellent stuffing, but the popcorn part is a tad gimmicky don't you think? (Perhaps the recipe was a result of Fussell's obsession with corn?)  The stuffing was a bit chewier than I cared for and you can see the bits of white in it which does make for interesting table conversation. I doubt I would make it again. In addition, I should have contacted D'Artagnan to get some venison sausage but instead I used some fine pork sausage I found at Whole Foods. 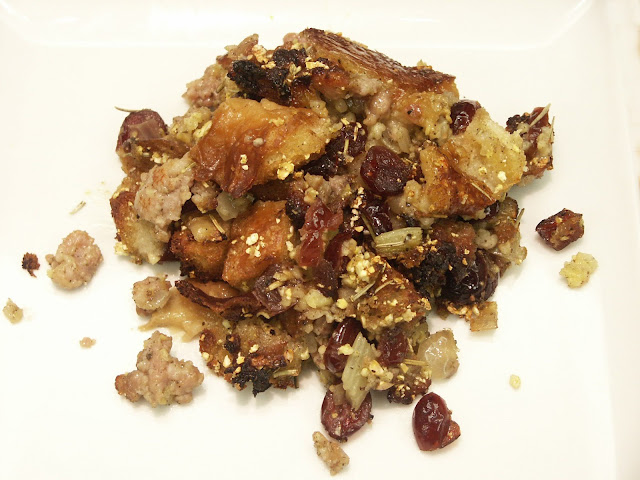 Method:
Place neck and giblets (except for liver) in cold water in a saucepan and bring to the boil. Reduce to simmer, season to taste, and cook slowly 45 minutes to an hour. (Cook liver in the broth 3-4 minutes only; remove gizzard and heart after 20 minutes cooking). Chop giblets and set aside. You’ll need about 2/3 to 1 cup chopped giblets. Discard (or chew on) the neck.

Film the bottom of a heavy cast iron skillet with the olive oil and heat over a medium flame. Add the popcorn kernels and cover loosely with a large (wok) lid until the kernels begin to pop. Shake the skillet slowly over the flame as the kernels pop until they stop popping (5 to 7 minutes). Uncover the skillet so the kernels don’t “steam” because you want them dry as possible.

Scoop popped kernels a cup or two at a time into a blender and pulse until they are finely chopped. Set aside.

Cut bread (leave crusts on) into small cubes and toast them in a low oven (300-325) about 10 minutes, or until golden brown.

In the same cast-iron skillet, quickly sauté the loose sausage (no more than 2-3 minutes) in 2 tablespoons of the butter, chopping the meat with a spatula so it cooks evenly. Remove meat and set aside.

Add remaining butter to the same pan, sauté the onions and celery and season them with the dried herbs and salt and pepper. Cook 5-6 minutes until the vegetables begin to brown but are still crunchy.

Add to the pan the cranberries, chopped giblets, ground popcorn and bread cubes. Add 2 cups of the turkey stock. Taste for seasoning and moisture. For a wetter stuffing, add more stock.

Pack the stuffing into a casserole dish and bake at 400 degrees for 20-30 minutes to make a slight crust on top.

Helpful Notes: This stuffing cooks separately from the turkey as a side dish. It is meant to be crunchy, with a lot of texture. For those who want a really soft dressing, add stock.

Giblets & stock can be done ahead, with leisure to distinguish cooking times between heart, gizzard and liver. You want to retain the soft texture of the liver and keep the heart and gizzard from turning to rubber.

Popping the corn kernels can be done the day before. You want it to be dry and crisp. If it’s not, just dry it in a big baking pan in a low oven (225 degrees) for an hour. Unless you’ve got a superpowerful blender, you’ll need to grind it in small batches so that it’s like coarsely ground nuts.

Claudia - Journey of An Italian Cook