OK, I'll fess up and admit my ignorance: I'd never heard of either of these women. This is a first for me with our 50 Game Changers and it's why I decided to join Mary's group. Culinary Education 101. If they're new to you too, I hope you'll enjoy reading and learning.

Tracey Ryder and Carole Topalian had a graphic design firm doing things like visitor's guides for Ojai, California and tourism websites. But outside work, the two were interested  in organic, seasonal gardening and cooking. Ryder has degrees in graphic design, journalism and psychology, and graduated from a professional chef school in Los Angeles. Topalian is an acclaimed photographer. After her father's death about 10 years ago, Ryder reevaluated her life and she and Topalian decided to launch a locavore print publication...much against the advice of others. (Locavore defined means anyone who is interested in eating food that is locally produced, not moved long distances to market.)

Ryder grew up in a farming family and had just read “Coming Home to Eat: The Pleasures and Politics of Local Foods” and “This Organic Life: Confessions of a Suburban Homesteader,” so starting a local magazine called Edible Ojai focusing on local food felt like a good fit.
(Ryder is on the left in the photo, Topalian on the right.) 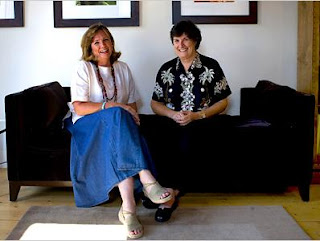 Their initial 16-page, one-color quarterly magazine was a hit. In a town of 8,000 people, they were printing 10,000 copies and running out within a few weeks. Ryder feels that although the food magazine niche was already crowded, most focused on cooking in or dining out, not on local food production, distribution and politics, in addition to what tastes good.

And then in 2004, Saveur magazine included Edible Ojai on its Saveur 100, a list of food trends and trend setters to watch  — the exposure prompted more than 400 people to call saying they wanted something similar in their communities.
And the two decided to change their concept to a licensing model, slightly different from a franchise, because they believed local ownership would lead to more authentic quality. They worked up a concept like a niche Associated Press, where individual publications are independently owned but share resources via the cooperative.

Four months later, Ryder and Topalian made the cross-country drive to Cape Cod to help launch the first licensed addition to the Edible group, published by Doug and Dianne Langeland.

While they are passionate about promoting local food, Ryder and Topalian are equally committed to profitability. By the end of 2006, Edible Communities was turning a profit. In 2007, it hit $1 million in revenue. Edible is adding about 10 new magazines a year, with about 70 operating in North America and a total readership of about 15 million, most picking up the magazine for free but some getting it delivered by mail with paid subscriptions. They were profiled by Inc. magazine in 2010.

Headquarters sells a small number of national ads, but most magazines sell about 90 percent of their ads locally. The publications are required to maintain a balance of at least 51 percent editorial content, and they manage their own content, ads, printing and distribution.

While they continue to add magazines, Ryder and Topalian have other ideas for expanding the Edible empire. Today the pair spend their time on corporate projects. While Topalian is still very much involved with guiding Edible into its next phase as well as doing all of the food and location photography for the cookbooks the company is producing, she is  semi-retired from day-to-day operations. Ryder misses writing: “I do miss writing very much. These days, all I write are emails ...and I used to be a good writer. My writing skill feels like a muscle I’ve let atrophy. Hopefully, in the near future, there will be opportunities for me to write again!”

I've always loved corn fritters and jumped all over these when I saw the recipe. The egg white addition resulted in light and airy fritters, filled with lovely sweet fresh corn. But, as good as these were, I still prefer Faith's take on fresh veggie fritters. 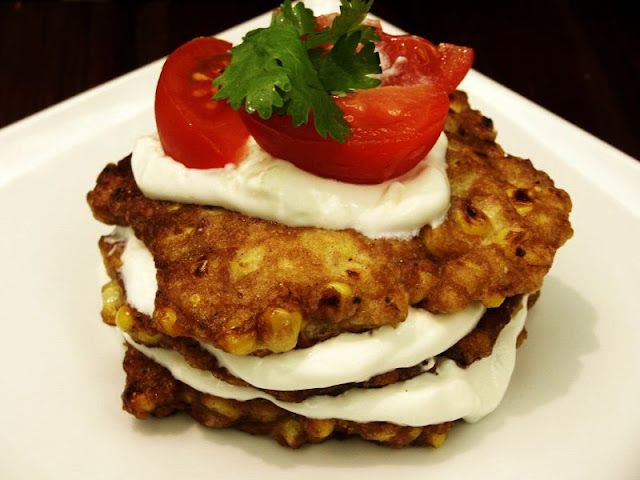 Ingredients:
2 cups fresh corn kernels (from about 3 ears of corn)
2 tablespoons all-purpose flour
2 eggs, separated
1/4 cup finely chopped spring onions or scallions
1/2 teaspoon kosher salt, plus more for sprinkling
1/4 teaspoons paprika
1/8 teaspoon freshly ground black pepper
1/8 teaspoon ground cayenne
1/4 cup extra virgin olive oil or grapeseed oil
1 tablespoon unsalted butter
Method:
In a large bowl, stir together the corn, flour, egg yolks, onions, salt, paprika, pepper and cayenne. Using an electric mixer, beat the egg whites until stiff peaks form. Stir one-quarter of the beaten egg whites into the corn mixture. Using a rubber spatula, gently fold the remaining egg whites into the corn mixture in three additions.
In a large skillet, heat the oil and butter over medium heat until the butter has melted. Carefully drop some of the corn mixture by tablespoons in to the hot oil, taking care not to crowd the pan. Cook each fritter until browned, about 2 to 3 minutes. Turn each fritter over and brown the other side, about 1 to 2 minutes. Remove the fritters to a platter lined with paper towels. Sprinkle lightly with salt, if desired. Repeat until all of the corn mixture has been used. Serve hot with some broiled tomatoes, a salsa made with chopped avocado, mango, lime and cilantro, and sour cream, if desired.
To serve: layer three with sour cream and add garnish of tomatoes and cilantro.
Join Mary from One Perfect Bite and all the other participants in this fun series.
Val - More Than Burnt Toast
Joanne - Eats Well With Others
Taryn - Have Kitchen Will Feed
Susan - The Spice Garden
Claudia - A Seasonal Cook in Turkey
Heather - girlichef
Miranda - Mangoes and Chutney
Jeanette - Healthy Living
April - Abby Sweets
Katie - Making Michael Pollan Proud
Mary - One Perfect Bite
Viola - The Life is Good Kitchen
Sue - The View from Great Island
Kathleen Van Bruinisse - Bake Away with Me
Kathleen - Gonna Want Seconds
Martha - Lines from Linderhof
Amy - Beloved Green
Linda - Ciao Chow Linda
Nancy - Picadillo
Mireya - My Healthy Eating Habits
Veronica - My Catholic Kitchen
Annie - Lovely Things

Claudia - Journey of An Italian Cook
Alyce - More Time at the Table
Amrita - Beetles Kitchen Escapades
Posted by Barbara at 6:49 AM