OK. I promise...no more ice cream recipes until next spring. But this is such a super one for the holidays I couldn't resist posting just one more. I think I actually might like this one better than the cranberry ice cream!

This ice cream is boozey, chewy and crunchy all in one bite. Very much in tune with the holidays. It doesn't make much so if you have a bigger churn than I do, double the recipe. Trust me, you're going to need every bite. But don't make it too far in advance of serving, because the men in your family will keep dipping into it with a spoon. Speaking from experience here guys. Luckily, it doesn't freeze hard so you can make it ahead. 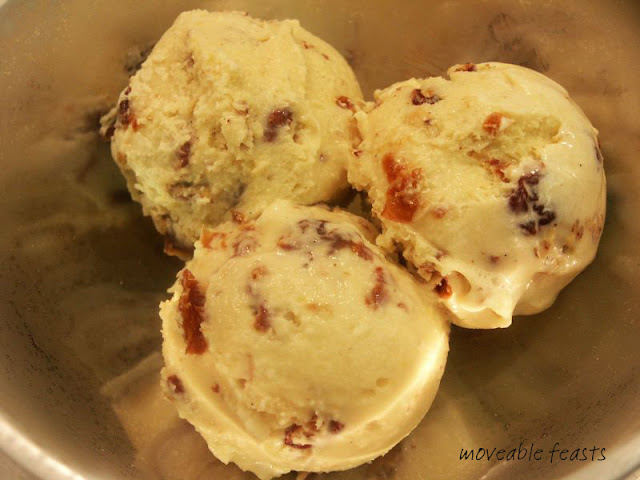 Method:
Toast the pecans. Set aside.

Soak the cherries in the orange juice and cointreau for a few hours until soft.

Pare off the peel (not getting any pith) of the oranges. Set aside.

Fill a saucepan half way with water and bring to a boil. Reduce heat to a simmer. Combine the cream, milk, sugars, salt, skim milk and skim milk powder, egg yolks, vanilla bean and orange zest in a glass bowl and set it over the simmering water. Stir the mixture constantly until it reaches between 165 and 180 degrees. Test with a candy thermometer and keep the temperature in that range for 10-15 minutes. The mixture will thicken somewhat. Cool over an ice bath until it is cool, or 65 degrees. Add the vanilla. Cover and refrigerate 4 hours or overnight.When you are ready to freeze the ice cream, pour it through a sieve to remove the orange peel and vanilla bean. Add half the cherries and ALL of the excess soaking liquid. (I squeezed the cherries to get most of the liquid out.) Freeze according to manufacturers instructions and when the mixture is semisolid (like a stiff cake batter), add the remaining cherries and the pecans. Continue until the mixture holds stiff peaks. Pour into a covered plastic or steel container and freeze.

My home is mostly blues and whites with lots of antiques. We thought it would be a nice contrast to make the kitchen very contemporary. Most of the photographs were taken professionally for a magazine right after it was finished. I still can't figure out why the cabinets looked so white in their photos; do they really like kitchens to look cold and uninviting?  It's really a warm room, with lots of family activity and messy cooking!

The final two photos I took more recently. The kitchen's end wall leads to a laundry room and is filled with  souvenirs from different Caribbean islands. I think the wall adds warmth to the kitchen and gives you a better idea of the true cabinet color, which is more a soft cream than white. And of course now, my cookbook shelf is jammed with books and notice the ceramic morel mushroooms; I have an ongoing love affair with morels and found these years ago in northern Michigan.
My kitchen hasn't looked so pristine since that first day!

On a very sad note, the paintings and painted objects on the back walls were mostly done by a local island artisan and friend named Matthew Paul who resided on St. Lucia. He and his family of 6 lived at the base of a small mountain and had a little gallery there. Their home was not very sturdy and the gallery was little more than a lean-to. My children and I have collected a great deal of his art over the years; it has always held a special charm for us.

We just found out that Matthew and his family were killed in a landslide during Hurricane Tomas which recently hit several Caribbean islands. St. Lucia was quite badly hit and there was a great deal of damage. The six of them were the only fatalities on the island. Can you imagine? Matthew was in the middle of doing one of his spectacular wall murals for Anse Chastanet, a resort we visit often. The owner tells me they will leave the unfinished mural as is.
A small section of Matthew's gallery....and my daughter, shopping. Don't you love the bright colors in his art work?