Every once in a while, a recipe makes me close my eyes and say Mmmmmmm. This is one of those times.  The flavor and color, the hint of honey, the tanginess of cranberries and would you believe there is brown sugar in this ice cream?? Words cannot describe. Not too sweet, tart and divine.

Interestingly, this recipe uses gelatin as an ingredient. After some investigation, I discovered gelatin assists in absorbing some of the free water in the ice cream and helps prevent the formation of large crystals. It also gives substance or a less watery taste when the ice cream is consumed.

So, this is the last of my Maida Heatter ice cream recipes for this season (I may sneak in someone else's though)...pretty soon I'll have you all putting her books on your wish list. But let me warn you, there aren't that many ice cream recipes in them....just a few in each book. Which makes them all the rarer. Maida's choosey. But her other recipes are worth their weight in gold; fortunately, Amazon is a great source for used books.

You don't need to serve a thing with this ice cream. I did briefly consider dumping in some dark mini chocolate chips at the end of churning (which I may try the next time I make it) but for the holidays, I wanted that pure red color and just a sprig of green mint. Thanksgiving or Christmas, you decide. It's perfect after a heavy meal. 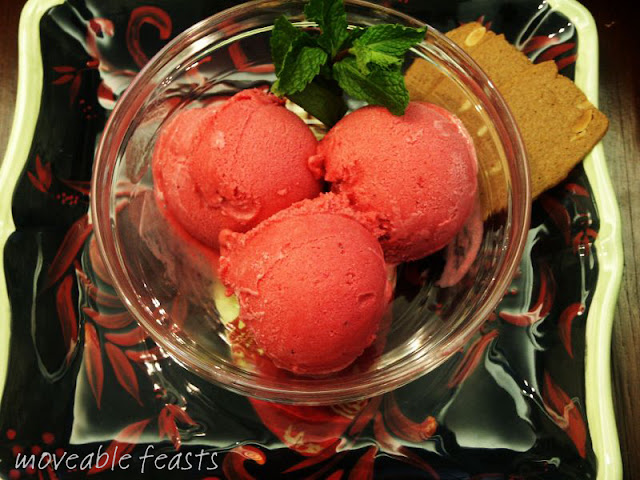 ﻿Ingredients:
2 pounds (about 10 cups) cranberries, fresh or frozen
2 cups water
2 cups orange juice
2 envelopes unflavored gelatin
1/3 cup cold water
1 cup light corn syrup
1/2 cup water
2 cups light brown sugar, firmly packed
1 cup honey
2 cups heavy cream
Method:
Wash, pick over and drain the berries. Place them in a large saucepan with the water and orange juice. Bring to a boil, then reduce heat and simmer for ten minutes. Remove from heat and allow to cool a little. Then process in a processor or blender. Press the mixture through a large stainer into a large bowl. Set aside.
Sprinkle the gelatin over the cold water, set aside.
Bring the corn syrup and the 1/2 cup of water to a boil in a saucepan. Boil gently, uncovered, for 5 minutes. Add the gelatin and stir to dissolve. Add the brown sugar, stir to dissolve. Remove from heat and add the honey, stirring to dissolve everything.
Mix this mixture into the cranberry mixture and set aside to cool. Cover and refrigerate for several hours or overnight. You can also chill it quickly in the freezer.
When you are ready to churn, Whip the heavy whipping cream in a chilled bowl with chilled beaters until it slightly holds a shape. Fold the cream thoroughly into the cranberry mixture and churn.
*Bench notes: This makes enough for a 4 quart churn. Mine is not that big so I cut the recipe in half.
This ice cream will stay semi-firm for several hours after putting it in the freezer. Maida likes it best at this consistancy. I don't. I froze it overnight.
Posted by Barbara at 4:13 PM