As kids, Carol Rosso and I were best buddies. Oddly enough, I only have two images of us together and they were both taken with my mother's stero 3D camera, long obsolete. The slides were in poor condition but I scanned them into my computer and did the best I could to clean them up. Thought I'd post them anyway because the clothes we wore back then are always good for a laugh. I mean what's with the rolled up jeans? And I can still hear my German grandmother reminding us not to forget our babushkas.... 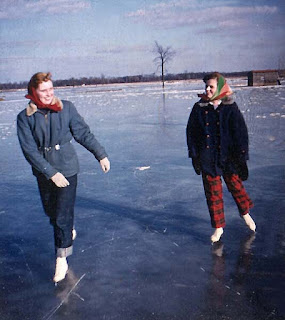 That's my dad in the old ice boating slide; he's well prepared for the cold. I love his hat and goggles, which were a necessity as sharp bits of ice come flying over the boat directly into your face. No windshields. (When we went with him we tied wool scarves over our faces, could barely see anything.) But other than that, the boats back then enclosed the rest of your body. It was a thrilling sport, the boat heeled in the wind just like a sailboat, one blade coming off the ice. Iceboats now are much lighter, completely open, making them faster. And probably more dangerous- I remember one day Dad had a really bad accident. We were there, but not in the boat with him. He refused to take us when he went out a great distance on the lake. A blade caught in a crack in the ice and the boat went over. The mast hit him across his forehead. He was a mess. Helmets, face masks and no doubt other protective gear are de rigueur now, thank heaven.

Carol and I shared much of our childhood either on the water or on the ice. That's the way life was when you lived on the St. Clair River. You may have heard of it. It's an important river because not only is it an international boundry between the U.S. and Canada, but it also connects the Great Lakes, permitting freighters to travel between the upper and lower Great Lakes.

Unfortunately, Carol and I lost each other for a while when I left town for college, married and moved all over the place in the Air Force. But we eventually found each other again and now exchange Christmas cards and email. Carol still lives in Michigan just a few miles from where we used to live.

This is her cake. Or perhaps her mother's cake. I never asked which. Somebody told me years ago that it can be found in the old Betty Crocker cookbook and I have also heard it referred to as a traditional German cake. I don't know if any of that is true, but I do love this cake. It's called a Blitz Torte. It's vanilla on vanilla, my favorite. Vanilla cake with a vanilla pudding filling. It has a cooked meringue on top of each layer. It's up to you whether you put the meringue up or down on the cake plate. I find it easier to put the filling on cake rather than meringue, so I usually put the first cake layer meringue side down. It's kind of tricky to get the layers out of the pan as the meringue breaks a little. Ignore it. And some of the nuts fall off the top layer. I just collect them and dump them back on top. You want the top to look pretty as there is no frosting on this cake. I'm making this sound hard. Trust me, it's not. But it's comfort food for sure. 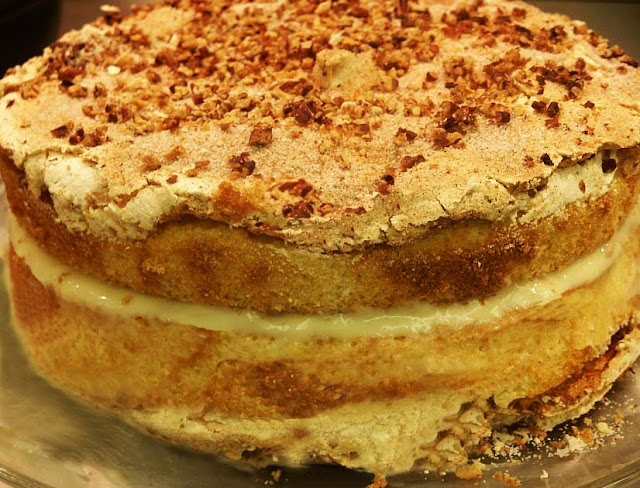 Method:Line two cake pans with wax paper, grease and flour them, and preheat oven to 350°.

Sift together first 4 ingredients. Beat the butter and Crisco together. Add the flour mixture alternately with the milk and vanilla. Beat in 4 egg yolks, one at a time. Pour batter into the two wax paper-lined cake pans.

Beat 4 egg whites until foamy and add 1 cup sugar by 2 T. amounts. Beat until there are stiff peaks. Spread evenly over the batter.  Make a mixture of cinnamon and sugar and sprinkle on top of the meringue. Sprinkle the ground pecans on top.
Bake for 35 to 40 minutes. 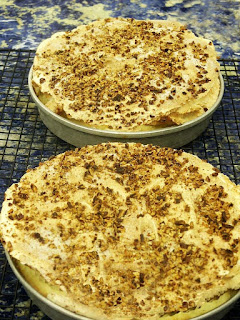 Make the custard filling:  scald the milk in a small saucepan. Whisk flour, sugar and salt in top of double boiler. Add scalded milk and cook while whisking 5-10 minutes. Add some of the hot mixture to the 2 beaten egg yolks then add egg yolk mixture back to double boiler. Cook 3-5 minutes more. Add vanilla. The filling should be thick enough to hold its shape. Cool and use as filling. 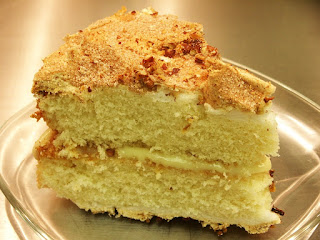