Pasties for the Super Bowl

Well, that title is a double entendre if I ever saw one. And trust me when I say there's no stripper video here. LOL. This is a food blog so everyone settle down.

"Pasties" ALSO refers to the plural form of pasty, a delicious meat pie. And I can't think of a better snack for the Super Bowl. A pasty is basically a pot pie without the pot. They're hearty with lots of pastry and just about everyone loves them.

My first introduction to pasties was many years ago in Petoskey, Michigan; Mother bought them in a bakery on Mitchell Street called Lee Ann's, now Johan's. They're a staple up there, although one initially thinks of a British pub when one thinks of pasties.
The pasty arrived in Michigan's Upper Peninsula via Cornwall, England. When tin mining started going bad in England during the 1800's the Cornish miners immigrated to America hoping to earn their keep in newly developing mines. The pasty was originally made as lunch for miners who were unable to return to the surface to eat. The traditional recipe includes diced or sliced steak, finely sliced onion and potato. Other common ingredients included rutabaga and sometimes parsley. The use of any carrot in a Cornish pasty is frowned upon by purists.

Today, pasty contents vary. Common fillings include beef steak and stilton, chicken and ham, cheese and vegetable and even turkey and stuffing. Other speciality pasties include breakfast and vegetarian pasties. Pork and apple pasties are readily available in shops throughout Cornwall, with the ingredients including an apple flavoured sauce, mixed together throughout the pasty.

This recipe has been a hit every time I've served it. I discovered it in Sarah Leah Chase's Cold-Weather Cooking cookbook. She named them after a Scottish man named Jim Paterson who was working for her at the time. I think you'll really like the ingredients-sausage, leeks, shiitake mushrooms, apples (plus some Calvados!) and sage. I'm including the pastry recipe because it's lovely and flaky, but you can save time by just using ready made dough. Pillsbury's refrigerated rolled pie crusts work fine. Your pasty won't end up quite so cheesy, but there's some in the pasty filling anyway. These are also smaller than the traditional pasty, making it easier to serve as an appetizer or snack. They are traditionally eaten by hand, even the big ones. If I serve these for supper, I never can resist some fruit salsa with them. Try inventing your own pasty- it's easy.

One small note: you can make them ahead of time and refrigerate for several hours before baking.When you're ready to serve, brush on the egg wash and bake. 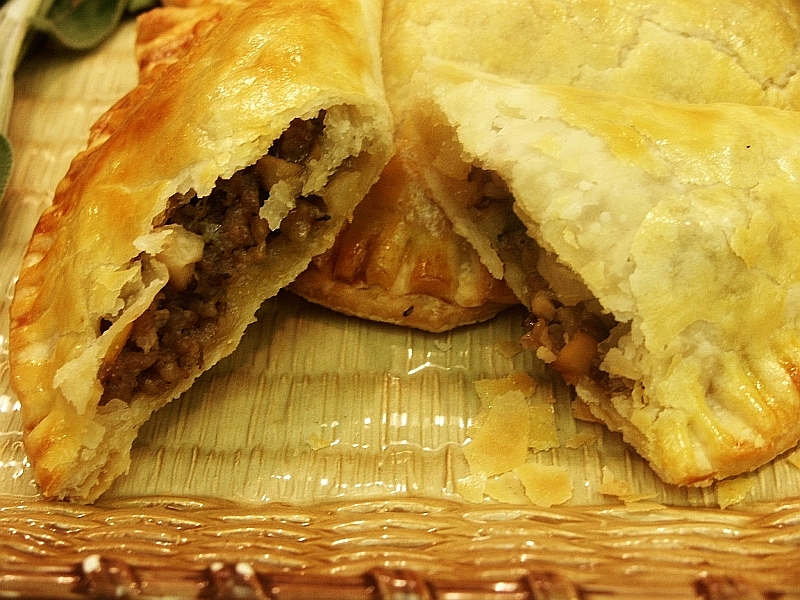 Method:
Prepare the pastry: Place all ingredients except eggs in a food processor. Process until the mixture resembles coarse crumbs. Add the eggs and process just until the dough comes together. Wrap in plastic wrap and refrigerate until ready to use.

Prepare the filling:
Melt the butter in a large skillet over medium-high heat. Stir in the leeks and mushrooms and sauté until softened, about 5 minutes.

Add the sausage and Calvados and cook, crumbling the sausage with the back of a spoon, until the sausage is cooked through, about 10-15 minutes.

Stir in the apples, sage and Cheddar cheese and cook a couple minutes more. Remove from heat and season with salt and pepper.

Preheat oven to 375°. Line a baking pan with parchment paper.

Divide the pastry dough in half and roll out to 1/8 inch thick on a floured surface. At this point you can cut out any size circle you wish. I cut out 5-1/4 inch circles.

To make the pasties: Put a tablespoon or so of filling in upper half of the circle (keeping in mind the amount of filling you use will depend on the size circle you have cut).


and fold the dough over to form a half-circle.


Seal by pressing edges together with a fork.


Repeat with the remainder of your circles and transfer the pasties to your lined baking sheet.
Beat the eggs and water together and brush over each pastry.

The pasties can be stored in the refrigerator for a few hours before baking.
Makes 2-4 dozen, depending on the size of your circles.
Posted by Barbara at 8:47 AM