Ina First Fridays: The Juice of a Few Flowers


Because I usually make an appetizer for this round of Ina's First Fridays, I tend to forget it also includes drinks. So I thought it would be fun to do a drink this month. Enjoy!

Several years ago I posted a rather lengthy piece about the famous Juice Of a Few Flowers and its origins. It was the story of Gerald and Sara Murphy and began in the 20's. This young, newly married couple wished to escape the snobbish, elite world into which they were born (which, one must keep in mind, supported them) and the strictures of their parents. And so they moved to Paris, soon to become the darlings of that era, hobnobbing with Picasso, Hemingway, Fitzgerald, Cole Porter et al. Their generous hospitality, spontaneity and extraordinarily adventurous spirit made them the trend-setters of the time. F. Scott Fitzgerald famously quipped about the Murphys saying: “The rich are different from us.” But the Murphys weren’t really filthy rich, just well off and knew how to live with great flair and style.

It was a fun post and if you'd like see some photos, read about their fascinating life, the gaiety, the tragedy and their final years, click HERE.

At any rate, cocktail hour became quite a performance with Gerald Murphy at the bar and he was very mysterious and secretive about his concoctions. When someone would ask what was in this or that drink he would always answer: "Just the juice of a few flowers."  Murphy eventually turned this favorite description of  "Juice of a few flowers" into  a cocktail. It was made of freshly squeezed juices -- one ounce orange, one ounce grapefruit, a half ounce lime, a half ounce lemon -- together with an ounce of gin. Gerald Murphy's instructions:
"The mint should be put in the shaker first. It should be torn up by hand as it steeps better. The gin should be added then and allowed to stand a minute or two. Then add the grapefruit juice and then the lime juice. Stir vigorously with ice and do not allow to dilute too much, but serve very cold, with a sprig of mint in each glass."

In 2008, I watched Ina Garten make a drink she called Juice of a Few Flowers and, having read all about the Murphys in several books,  I smiled and knew I had to try it. You're going to love it. It’s a drink with a tart citrus punch and a nice kick of vodka. An ice-cold glass, a sugared rim, a sprig of mint. Pretty darn close to Gerald Murphy's description.
Juice of a Few Flowers
2008, Barefoot Contessa, Back to Basics 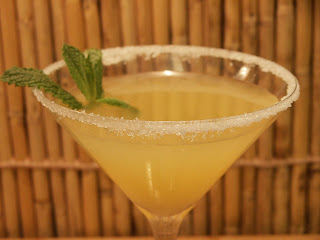