This was such a fun post to write. I LOVE New Orleans and have literally eaten my way through the city. This Game Changer is the undisputed queen of NOLA and my post could have gone on and on as the Brennan family is fascinating.

Ella Brennan is the daughter of Nellie Brennan and Owen Edward Brennan Sr., who had a job in the New Orleans shipyards. She grew up in the Irish Channel section of New Orleans and instead of joining the debutante set, she spent her time at Cafe Lafitte, learning about life from the Cafe Lafitte regulars like Lucius Beebe, the famous bon vivant, and Max Kriendler, who owned the "21" Club in New York. Nothing dull about Ella's teenage years!
"Before the jet plane, there was no jet set, darlin' -- there was Cafe Lafitte," she said. "Everybody was there. "And there I was, this little girl off a bayou, big eyes, big ears and a big mouth in the making."

Ella's  oldest brother Owen was good-looking, gregarious and quite the bon vivant around town. He became one of the French Quarter's favorite gadabouts. He earned his reputation as proprietor of the Old Absinthe House and later the Vieux Carre, a restaurant he bought in the French Quarter. Ella idolized him. She griped about the poor quality of food served there so Owen offered her a job.

She was still a girl when Owen first put her on an airplane and sent her around the world to eat in the finest restaurants and see what she could learn. "My mother cooked everything you could think of better than anyone on earth," Brennan says. Brennan was definitely not a cook (“Who the hell wants to cook?”), but she developed an educated palate through her travels, which she trained by “restaurant chasing,” as she called her passion of energetically sampling the offerings of restaurants wherever she went. Something she's continued throughout her life.

"I read all the books ever written on Creole cooking and then all the French ones that were translated, " she says. "I still say the first 137 pages of the Escoffier cookbook -- if you don't know that, you don't know anything about cooking," she says.

Miss Ella, as she is called, married briefly but wasn't much of a stay-at-home mom. Although unconventional, Brennan endowed her children with something her daughter says she values even more: interesting lives.

While Vieux Carre ultimately grew into a consequential establishment, Owen was determined to create something sensational. Brennan's, he would call it. Unfortunately, he died in 1955 but together, the family managed to regroup and get on with the project."Everybody mortgaged their houses, " Brennan says. "And everybody who had an in-law got a loan."

"We did everything wrong we could possibly do wrong but we made a lot of friends along the way," is how she explains the family's success. Brennan's was a hit. "A lot of business got done at Brennan's. Some people did more business at the restaurant than in their offices."

The family packaged the Creole mystique and pushed it into the American mainstream. "Bananas Foster" was invented during Miss Ella's reign at Brennan's; so was "Breakfast at Brennan's," the prototypical American brunch. In the process, they developed social, financial and political bonds far beyond New Orleans. The Brennans are the Kennedys of the Big Easy.

In 1969, the Brennans bought Emile Commander's restaurant. The culinary world was being shaken by a controversial new approach to food -- nouvelle cuisine, and Brennan wanted to marry it somehow to traditional New Orleans fare. She invented "haute creole". (Interesting since the Brennans were Irish.) The restaurant was not an immediate hit.

"Let me tell you, it was dicey in the early days, " says Brennan's son Alex. For five years, Brennan struggled with the restaurant, but experience won out.
The family survived deaths and a rift in 1974, when a family feud split the business. Owen's children -- Pip, Jimmy and Ted -- have run the family's original restaurant, Brennan's, on Royal Street. At the same time, Ella, Dick, Adelaide, Dottie and John took over Commander's Palace in the Garden District and built it into one of the 10 top grossing restaurants in the United States. 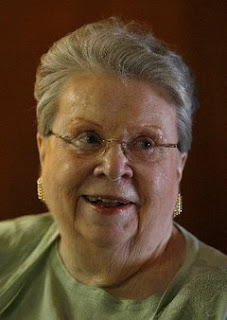 When the world started to change, Miss Ella pushed her brother Dick to computerize the business. When the national diet began to change, she pushed her chef, Emeril Lagasse, to lighten Creole dishes. Creating restaurants that can thrive in a tight economy, herding her family through a change of guard -- these are the sort of things Miss Ella can handle.

Many chefs got their start here: Paul Prudhomme, Emeril Lagasse and Frank Brigsten, who says: "Can you cook in that environment?" he asks. "Do you have the moves? Can you do the dance? That's what you learn in a place like Commander's Palace: Do you have it or not?" "You can be the greatest chef in the world, " says Brigtsen, "but if you can't serve your food at a profit, you won't be the greatest chef in the world for very long." 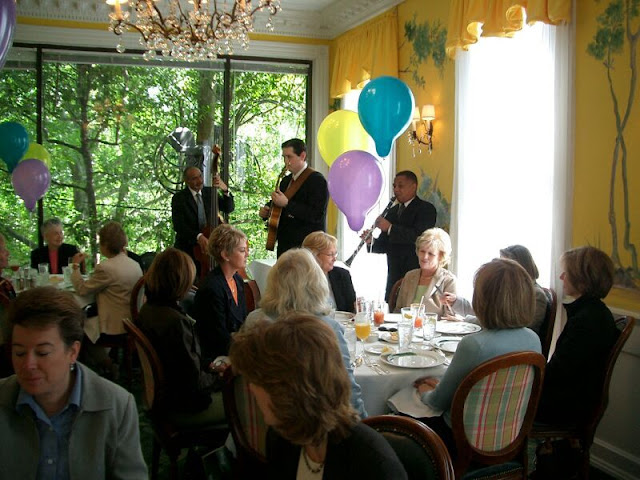 The reason for Ella Brennan's success? She's never content; she does her homework and reads voraciously; she learned the business from the bottom up; she knows how to combine a spirit of fun with a grand restaurant; and finally, she knows service is king.

In 1996, Commander's Palace was honored with the Lifetime Outstanding Restaurant Award from the James Beard Foundation. It has also been awarded the Lifetime Service Award.
In 2002 the Lifetime Achievement Award Winner from SFA was given to Ella Brennan.

There are many famous Brennan restaurant recipes we've read about, but I decided on this wonderful, unusual soup. Of course, you have to love eggplant, which I do. This is supposedly a favorite of Ella's and is thicker than most soups, almost a purée. I made a few changes to the recipe. I puréed the soup in my food processor and I used fresh herbs. 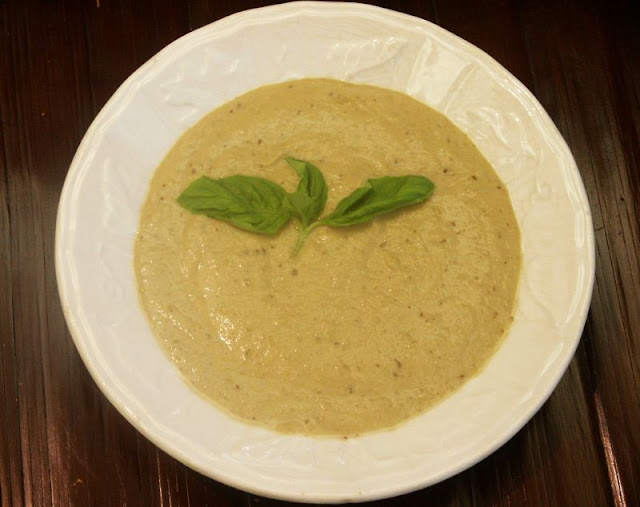 salt and pepper to taste

Method:
Melt butter in a large saucepan and sauté the onions, celery, potatoes and eggplant until soft, about 25 minutes. Add curry powder, thyme and basil. Cook until ingredients begin to stick to the bottom of the pan.
Add chicken stock and cook until soup begins to thicken, about 30 to 45 minutes. Remove from heat, purée in a food processor and then add cream and salt and pepper. Serve immediately.

Claudia - Journey of An Italian Cook
Alyce - More Time at the Table
Amrita - Beetles Kitchen Escapades
Posted by Barbara at 6:37 AM