Christopher Hirsheimer and Melissa Hamilton have known each other for more than 15 years. Hirsheimer grew up in San Francisco and attended college in the San Francisco Bay area in the ’60s and ’70s, where she was much into the local food scene.

Hamilton is the daughter of Jim Hamilton of Hamilton’s Grill Room in Lambertville, where she was the chef when it opened more than twenty years ago. She is the sister of Gabrielle Hamilton, the chef/owner of Prune in Manhattan.
Hirsheimer was one of the founders and an executive editor of Saveur magazine, where Hamilton ran the test kitchen and served as food editor. Together the pair had more than 30 years experience working with magazines such as Metropolitan Home, Food and Wine, Cook’s Illustrated, and Martha Stewart Living and on cookbooks by Julia Child, Alice Waters, Mario Batali, Jacques Pepin, Lidia Bastianich, and other notables.
(Christopher Hirsheimer left, and Melissa Hamilton ) 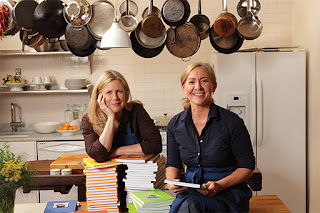 They decided to leave the commuting life and start Canal House in 2007 as a photo and design studio for cookbooks and magazines. They made their light-filled, second-floor atelier an  alternative place: "a studio, workshop, dining room, office and kitchen devoted to good ideas and good work relating to the world of food. The pair cook, write, photograph, design, and paint." They brainstorm and consult. Plus, with computers, they figured nobody knows or cares where they're physically located.” Friends told them it was a mistake...not only the publishing, but moving to small town New Jersey. They went ahead anyway.

Sounds like a dream, doesn't it? Start a small food business with your best cooking pal, sit around inventing cocktails and snacks at the end of every day — but both are determined women AND real cooks. Ms. Hamilton’s French heritage, Ms. Hirsheimer’s California childhood, both women’s extensive travels, culinary experience and spice collections add up to success. The first issue of summer recipes was simple they said, because cooking in that season is so minimal: salads, grilling, fruit, the occasional backyard paella. And so it began.
Canal House Cooking, published three times a year, has no parent company, no advertising and no distribution network other than independent bookstores and the Internet. But by designing and photographing it themselves, then outsourcing the printing to China when every local printer they approached turned them down flat, the women hope to both make it all work and preserve the publication’s homespun qualities. This may not sound like a successful idea in this day and age, but the books, which now number five volumes, have received acclaim not only from the national food media, but also from such disparate entities as Oprah and retailer Williams-Sonoma.

One of their big breakthroughs came on food52.com, the website of food writer Amanda Hesser  and Merrill Stubbs. Hesser and Stubbs conducted what they called the Tournament of Cookbooks, a sort of round-robin competition among what they considered to be the most notable cookbooks of 2009. After votes by celebrity judges and the site’s readers, Canal House Cooking Volume No. 1 made it to the final round, beating out big-name books such as Momofuku by David Chang and Peter Meehan and Thomas Keller’s Ad Hoc at Home. (It lost to Seven Fires by Francis Mallmann.)
Hirsheimer says: “Of course you have to have, one, a good product and, two, good timing. But you also need, three, some luck. We’ve been lucky. We had a vision, but you have no idea how it will fly.”

It would be fun to visit them while they work, as I read there's always something delicious bubbling on the stove or being pulled from the oven. In the morning,  café au lait.  On a wintry afternoon a steaming bowl of homemade soup and after hours a split of Champagne. The best part, though, is watching them work.  They move calmly and quietly and seem to communicate telepathically.  They work quickly, too, cramming in as many shots as possible while the sun cooperates. Photographing in natural light is Christopher's signature style.
The pair continues to consult and collaborate on books and projects for their high-profile friends.

My mother used to make a recipe similar to this, except she used morels. So I know ANY wild mushroom would be perfect in this recipe. I had to cheat a bit today because chantarelles have a season just like morels and unfortunately, it's not now. Chanterelles are worth their weight in gold anyway.....they are "golden looking, golden tasting, and golden priced." So I used one package of reconstituted chanterelles and the rest were maitake frondosa, also called "Hen of the Woods." Turned out to be a great combo. 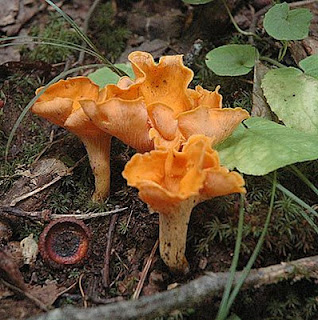 Now I have to say, my favorite way to serve morels is simply sauteed and seasoned with salt and pepper, so if you're fortunate enough to find some chantarelles, they'd be perfect that way as well. Hirsheimer and Hamilton suggested serving this friscasse over mashed potatoes as well as pappardelle, but I remembered a visit a while back to The Greenbrier and they served an omelet filled with a fresh morel fricassee. So that's what I had for lunch the next day with the leftovers: an omelet filled with this delicious friscasse of wild mushrooms.

Fricassee of Chanterelles
Recipe by Melissa Hamilton and Christopher Hirscheimer 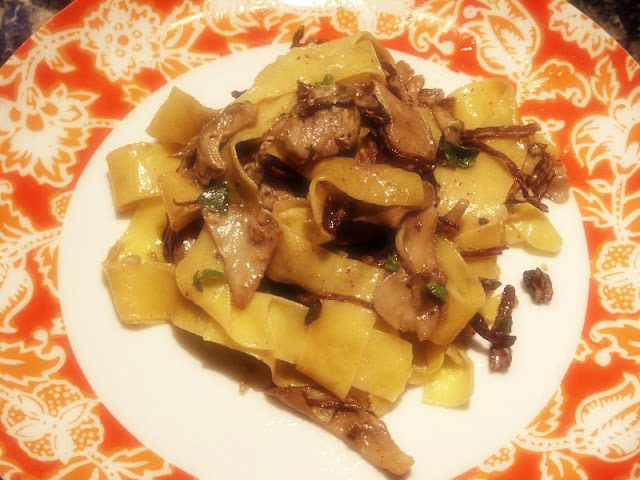