Would you believe, when she was first married, Paula Wolfert couldn't boil water? Determined to change, she decided to take cooking classes at Dione Lucas's Cordon Bleu and found her calling.

In 1959, Paula moved to Morocco for 10 years with her husband. While there, she became fascinated with the local dishes and Mediterranean ingredients. As a result, she has written several cookbooks on the subject of Mediterranean cuisine.  She moved to Tangier in 1971 and stayed for five years, during which time she wrote Couscous and Other Good Food from Morocco (1973) and Mediterranean Cooking (1976). Both books were enthusiastically received by curious cooks who were searching for unfamiliar ethnic fare. 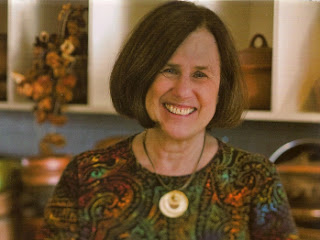 Ms. Wolfert was  criticized for using hard to find ingredients, but remained adamant about using them. "Ingredients from a given region have amalgamated gracefully over the years, and if you change them, you simply won't get an authentic taste," she says. "When people return from their travels they want to replicate what they have tasted. It is my job, as a food writer, to explain how to integrate unusual tastes. Most of the ingredients are now readily available, at least by mail order. But you have to be romanced into searching them out. That's part of the fun."

Wolfert set out to write The Cooking of South-West France in the late 70's after traveling around the region in search of the perfect cassoulet. (And that book is where I found today's recipe.)
More recently Wolfert has been addressing concerns about the benefits of a balanced, healthful diet. When meat is used, Wolfert has a lot of tricks to maximize its flavor while cutting fat. Then, when Wolfert traveled across the Euphrates, she came back with a new daily routine that gets her eating vegetables in the morning in what she calls her Biblical Breakfast Burrito. As a result of healthier eating, she's lost over 30 pounds, slowly---a pound a month over the past couple of years.

I read an interesting article about Paula's favorite lunch when she's eating alone. It's called Pa amb Tomàquet (In the Catalan language this means “Bread with Tomato ... and Ham.” ) which she says sums up all that is best in the Mediterranean, an area whose cuisines and flavors she's been studying her entire adult life. So here's a bonus second recipe today:

"Pa amb Tomàquet
Cut a rustic style bread with a serrated knife into ½-inch slices. Lightly toast the slices on a grill or in a toaster-oven on both sides. Slather the toasted slices with freshly crushed ripe tomatoes. The layer must not be too thin—or too thick—more like a thin, even red sheen. Sprinkle with fine salt. Slowly drizzle a light, golden extra-virgin olive oil on top on one side.
If you like, you can top the bread off with paper-thin slices of Serrano ham or large, fat fillets of anchovy, preferably imported from l’Escale.
You may want to rub some garlic on the bread as well, but I’ve yet to meet a Catalan gastronome who would approve. Eat with a knife and fork."


Does everyone love a boozy ice cream as much as I do? Especially around the holidays. Now I know Ms. Wolfert is best known for her Mediterranean cooking, but don't forget she also wrote "The Cooking of Southwest France".  And in that gem this recipe for Prune and Armagnac Ice Cream is to be found.

The prunes have to macerate in Armagnac for a couple weeks in advance, but the wait is worth it. I just kept the jar in the fridge for two weeks and when I opened it to make the ice cream, I took a sniff and was in heaven. My spoon was in that ice cream maker frequently...tasting....tasting. I could barely wait for it to be done. Serving it with extra prunes was suggested, but frankly, in this case, less is more. 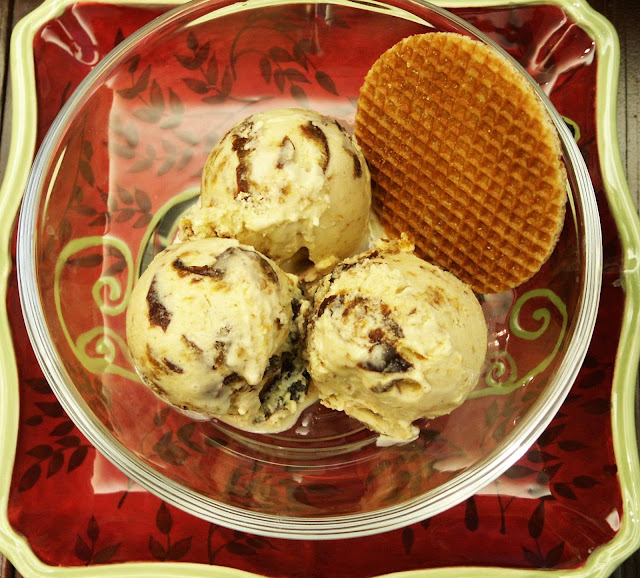 Method:
For the prunes:
Soak the prunes in the tea overnight so that they swell up.
The following day, drain the prunes, discarding the tea. Roll each prune in paper towels to dry well. Place them in a sterilized 1 1/2 -quart wide-mouth canning jar.

Make a syrup with the sugar and one-half cup water; bring to a boil, stirring. Boil undisturbed for 2 minutes. Remove from the heat and allow to cool. Pour the syrup over the prunes. Completely cover the prunes with Armagnac; stir. If the prunes rise above the line of liquid, add more Armagnac. Let the prunes soak a minimum of 2 weeks in a cool, dark place or in the refrigerator. Use clean wooden tongs or a wooden spoon to remove the prunes as needed (keeps up to one year).

Ingredients:
For the ice cream

1 quart milk
1 small piece of vanilla bean, split down one side, or 1 1/2 teaspoons vanilla extract
10 egg yolks
1 cup plus 1 tablespoon superfine sugar
Pinch of salt
1/2 cup heavy cream
30 cup sugar prunes in Armagnac, pitted, plus 1/4 cup of the syrup, plus extra prunes for garnish, if you have them (15 prunes)

Method:
For the ice cream

A day before serving, in a heavy enameled saucepan, scald the milk with the vanilla bean; set aside, covered, to keep warm.
In a mixing bowl, beat the egg yolks and sugar together until thick and pale and a ribbon forms when the whisk is lifted. Whisk in a pinch of salt.
In a heavy enameled or stainless steel saucepan, warm the beaten eggs and sugar over very low heat, stirring constantly. Gradually stir in the hot milk. Cook over low heat, stirring constantly with a wooden spoon, until the custard thickens enough to coat the back of the spoon, the froth on the surface has disappeared, and the custard registers about 165 degrees on a candy thermometer. Do not boil. Immediately remove from the heat.
Strain the custard into a chilled mixing bowl set over ice. Cool down quickly, stirring constantly. If using vanilla extract, stir it in at this point. Pour into an ice cream maker and freeze according to the manufacturer's instructions.
Meanwhile, coarsely chop the prunes with a large sharp knife or by pulsing in a food processor. When the ice cream is half frozen, add the prunes and the Armagnac syrup. When almost frozen, add the cream. When the ice cream is done, transfer it to an airtight container and set in the freezer overnight.
To serve, place a whole, soaked prune on top of each portion and drizzle with a teaspoon or so of the syrup.
Makes 2 quarts