Ms. Silverton, who admits she wasn't much of a student, dropped out of Sonoma State in her senior year. After studying at Cordon Bleu in London, she went to work at Michael’s in Santa Monica, in 1979. There she was inspired by Jimmy Brinkley, their pastry chef. “Unlike when I studied at Cordon Bleu and they said don’t be creative, Jimmy was a wild man, tasting, changing, and I saw how much flexibility there was in desserts,” she said. She learned fast. When Spago opened in 1982, Wolfgang Puck hired her as head pastry chef, but in the back of her mind, Nancy was giving a lot of thought to making great bread.

After a brief stint at Maxwell’s Plum in New York, she returned to Spago while she and her then-husband, Mark Peel, were looking for space to open restaurant Campanile. Her mother discovered a great building for lease that was large enough to have a bakery. So La Brea Bakery opened six months before Campanile, in 1989. 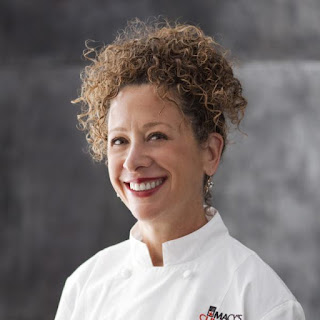 To study bread baking, Ms. Silverton enrolled at Lenôtre in Paris. “I thought I’d learn some foolproof recipes,” she said. “But I don’t speak French, and I didn’t know about adapting recipes. They were all failures. I had to start from the beginning, a tablespoon of this and a teaspoon of that. It took hundreds of tries.”  Nancy immersed herself into starters, yeasts, and doughs, and quickly became L.A.'s leading lady of bread baking.

She sold her interest in La Brea in 2001, entrusted it all to an investor and he, in turn, entrusted it all to Bernard Madoff.
Nancy remained a consultant and worked at Campanile until 2005. She opened Pizzeria Mozza in 2007 and Osteria Mozza in 2008, before discovering she was broke. Because of Madoff, she lost everything. Fortunately, she still co-owns (with with Mario Batali and Joe Bastianich) those two restaurants, two of Los Angeles’s most popular restaurants. Silverton just published her eighth book, “The Mozza Cookbook” She guest chefs at two local restaurants (Jar and La Terza) for the sheer fun of it.

Silverton's bran muffins got rave reviews from David Lebovitz so I couldn't resist trying the recipe. They are very light, full of flavor and not as sweet as most bran muffins. I raised the oven temperature to 375 degrees on the advice of another blogger who had made these. She also suggested mounding the batter into the liners, but as you can see, I filled them too full. Overflowing is good sometimes (love those tops) and these tasty muffins are pretty much guilt-free. 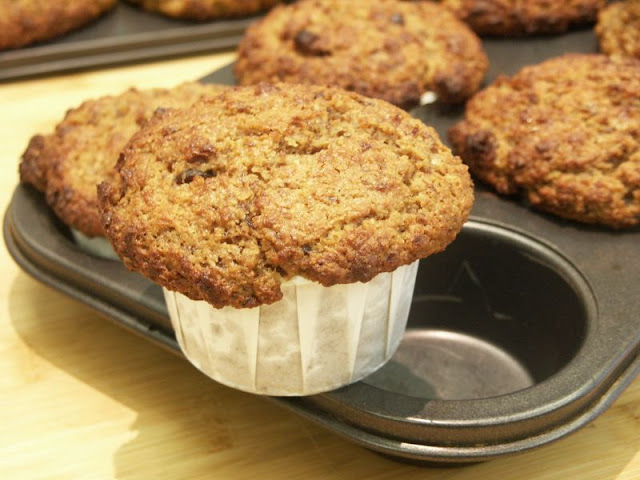 Method:
Preheat the oven to 350F. Line a 12-cup muffin tin (with 1/2-cup indentations) with paper liners.
Spread the wheat bran on a baking sheet and toast in the oven for six to eight minutes, stirring a few times so it cooks evenly. Let cool.
While the bran is toasting, heat 1 cup (135g) of the raisins with 1/2 cup (120ml) of the water. Simmer for ten minutes, or until the water is all absorbed. Puree the raisins in a food processor or blender until smooth.
In a large bowl, mix together the toasted bran, buttermilk or yogurt, 1 cup (250ml) water, then mix in the raisin puree, orange zest, and brown sugar.
Stir in the oil, egg and egg white.
Mix together the flours, baking powder, baking soda, and salt, and sift directly into the wet ingredients. Stir until the ingredients are just combined, then mix in the remaining 1/2 cup (55g) raisins.
Spoon the batter into the muffin tins, making sure the batter is mounded slightly in each one. Because muffin tins can very in size, if your tins are larger, make fewer muffins. Bake for 25 to 30 minutes, or until the muffins feel set in the center. 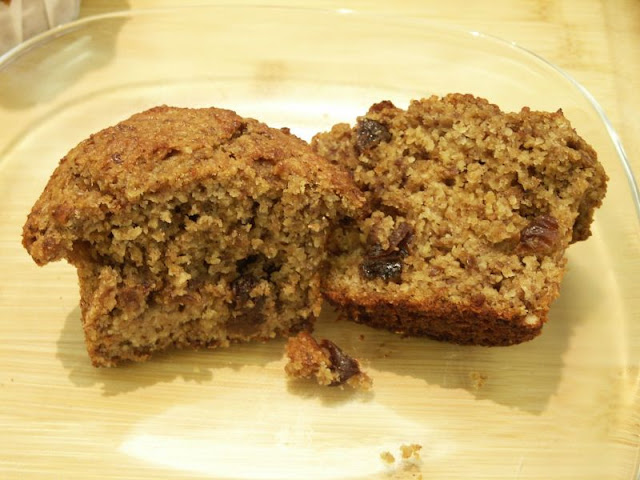 Happy Veterans Day to each of you who have served our country. Thank you for your courage and dedication. And for our freedom.