We were a family of boaters and when I was younger we spent part of every summer on the Great Lakes, Georgian Bay and in the Little Traverse Bay area. The latter meant we saw a lot of the busy summer resort towns of Petoskey, Charlevoix and Harbour Springs. There are several restaurants and hotels in those three towns owned by Staffords and over the years we've enjoyed eating and staying at every one of them. When I go up now, I usually stay in Petoskey at Stafford's  Bay View Inn. 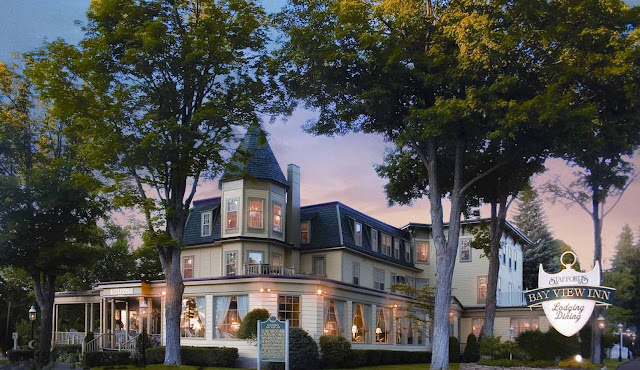 A candy and ice cream company you may be familiar with named Kilwins (which has been around since the 40's) used to make a very special ice cream only for the Stafford establishments: Black Cherry. Staffords became famous for it. It was ambrosial and we always saved room for dessert when we visited any of their restaurants. Still do. As far back as I can remember, everyone in my family looked forward to a dish of that ice cream (particularly my dad).

A few years ago, when my sister and I were lunching at the Stafford's Weathervane restaurant in Charlevoix, we got into a conversation with the manager and asked why we had never been able to buy a cone of that wonderful ice cream at Kilwin's in town. He told us that Kilwin's, after many years, asked the same question; indeed, they wanted to offer it to their customers, who had been asking for it for ages. Of course, I have no idea what Stafford's contract with Kilwin's was, but we were informed by the manager that the Kilwin/Stafford black cherry ice cream arrangement was over. Staffords turned to a company in the Traverse City area and asked if they would make it for them. Perhaps Staffords owns the recipe? I have no idea. As far as I know, the Traverse City company still does the supplying. And it's every bit as fabulous as it ever was.

So, if you happen to be up north near a Staffords establishment, be sure to order their black cherry ice cream for dessert. If you're near a Kilwin's, you can now buy their version of  it, but I'm quite sure it's not the same as the black cherry Stafford's serves. Because Florida beggars can't be choosers, when Kilwin's opened in my area, I kept my fingers crossed; their black cherry was perhaps close enough to the original.....satisfaction might be at hand. Or so I thought. Guess what? They don't carry black cherry in their Florida stores at all!  Ever.  :(

Lately I've been experimenting with different recipes and finally came up with one I really like, but trust me when I say....it's just not the same. Could it be nothing tastes as good as it does when I'm in northern Michigan? After all, we must factor memories in with that ice cream and Stafford's black cherry has many years of happy memories attached to it. At any rate, this is as good as it's going to get until I  visit the north country again. 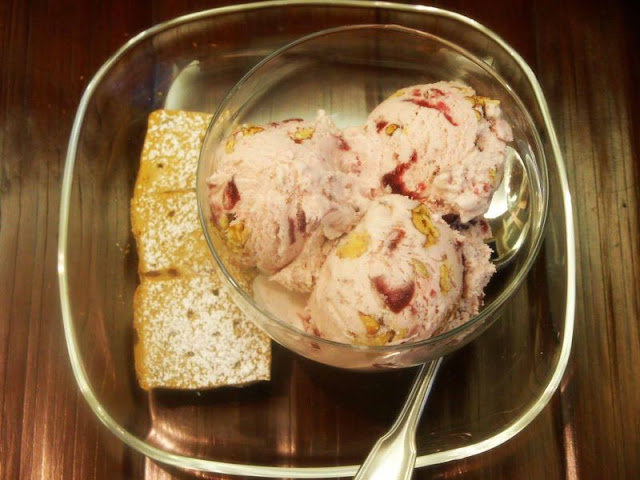 Method:
Stem and pit the cherries and place in a saucepan with the water and sugar. Bring to a boil and simmer for 25 minutes. Stir frequently. Remove from heat and add the lemon juice.
Cool. You can keep refrigerated for a couple weeks if you wish.
When ready to use, let the cherries drain in a sieve. (You can use the leftover syrup in drinks.) Chop the cherries.
In a bowl, whisk the creams and sweetened condensed milk well. Add the chopped cherries and pecans and, if you like your ice cream a definite pink, a drop of food gel.
Freeze according to manufacturers directions.