The view of Bora Bora from the air is truly breathtaking.  As we were landing, there was water quite close to the runway on both sides. The airport, built by the US forces in 1942, is located on a palm fringed motu about 20 minutes by boat from the main village of Vaitape. Of course, the landing merely added to the thrill of finally arriving on Bora Bora. Just the name itself conjures up magic, doesn't it? Everyone on the plane was excited. And no matter where you're staying on Bora Bora, after the plane lands on that little spit of land, you have to take a boat to your hotel. 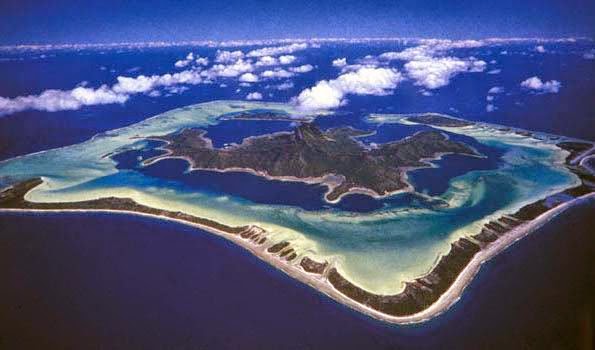 The island, located about 230 kilometres (140 mi) northwest of Papeete, is surrounded by a lagoon and a barrier reef. In the center of the island are the remnants of an extinct volcano rising to two peaks, Mount Pahia and Mount Otemanu, the highest point at 727 metres (2,385 ft). The permanent population of Bora Bora is 8,880. Most of the temples (Marae) have been destroyed during the last century by the English missionaries, and unfortunately there are little archeological remnants left.


We stayed at the Hotel Bora Bora. It's an Aman resort. We took some razzing from friends we traveled over with, but we didn't care...it was worth the splurge! As with so many hotels here, I see on their website they are remodeling. Not that I thought they needed it, as we loved our bungalow. So some of my photos might be dated. This time, we weren't overwater, but  it didn't bother us a bit. You'll understand after you see the slideshow. I mean, how elegant can a bungalow get?

The main village is Vaitape and is set at the foot of Mount Pahia. It is the island’s commercial and administrative centre. There is just one main road around the island, and it goes through Vaitape, past assorted churches whose bells peal loudly on Sundays. No stoplights though there is a stop sign. Complimentary shuttle from Hotel Bora Bora to town was available once a day.

Of course, who could resist lunch at Bloody Mary's? Tracy is standing by a plaque listing all the famous visitors. (BTW: the place was jammed with cruise ship passengers.) And why is she pointing to Pierce Brosnan's name? Well, there's a bit of a story behind that. 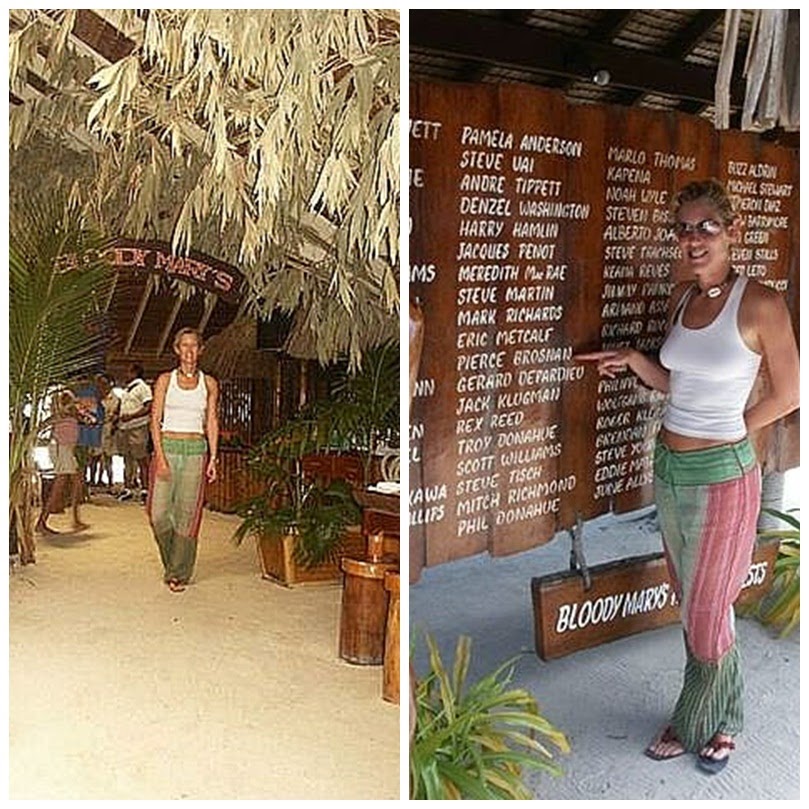 The second day we were there, we noticed extra security. Someone soon told us Pierce Brosnan had arrived. Ta Da! We were given to understand he and his family are frequent guests at this hotel. Everyone practically fell down groveling. Not that we were completely ignored, but close. We did see he and his wife in the hotel bar a couple times but noticed they didn't eat there. I don't blame them, the food was ghastly. We actually complained. An Aman resort with bad food?? Hard to believe.

Because we hadn't read or heard about any special restaurants here, we asked one of the employees where on earth the Brosnans were eating and she told us about a lovely restaurant....supposedly with an excellent chef, the best (and practically only... at that time anyway) one in the area. When we called for reservations, we were told Mr. Brosnan took over the restaurant and reservations were closed. As they were only open several days a week and we were only on the island for 5 days, we never did have the opportunity to eat there. We suffered through the bad dinners at Hotel Bora Bora, thanks to Mr. Brosnan. There was, of course, a joint or two in town, but neither of us were so inclined. I sincerely hope something will be done about the hotel's chef during this remodel. (Moorea and Bora Bora both left a lot to be desired in the culinary arts department.)

Tracy's diving departed from the hotel.  She had the following comments about diving locations:

Manta Ray Dance: a very cloudy day but saw plenty of mantas
Tupitipiti Point: lots of dolphins
The White Valley: again, lots of dolphins
She did not see any leopard rays at the one area where they frequent.

Snorkeling was fairly good here and Tracy took me snorkeling to a wall that scared the life out of me. I thought the bottom was dropping out (it was) and it's very disorienting when you can't see the bottom at all. We saw both turtles and rays while snorkeling. 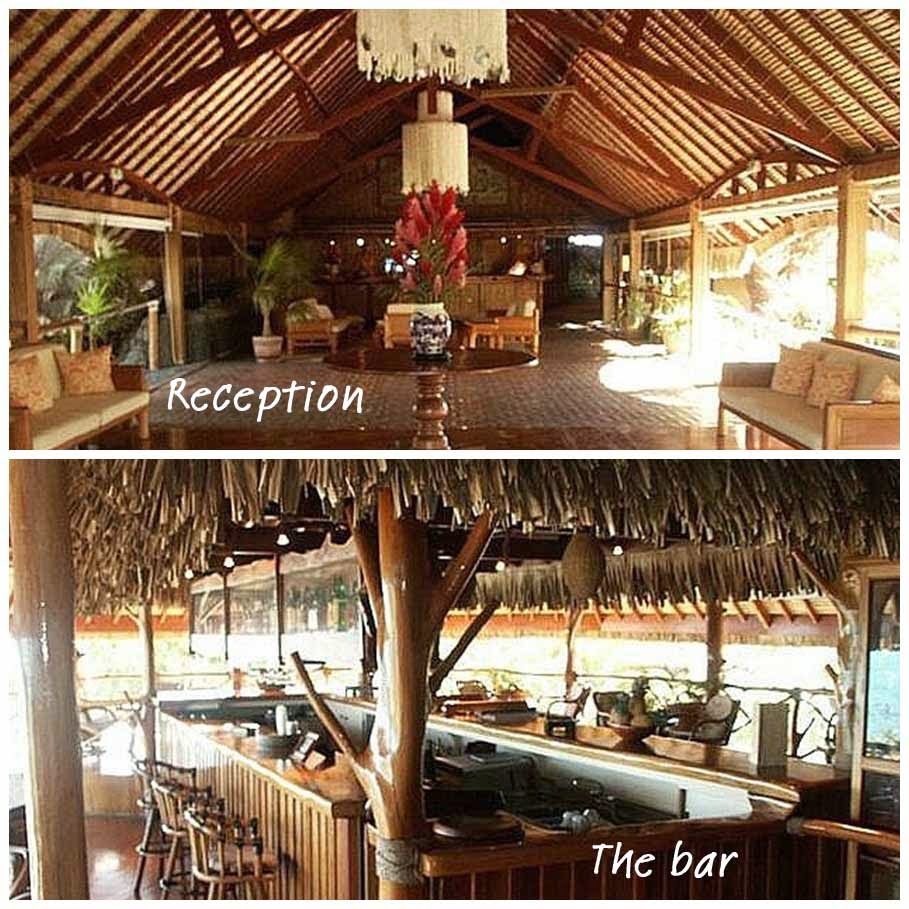 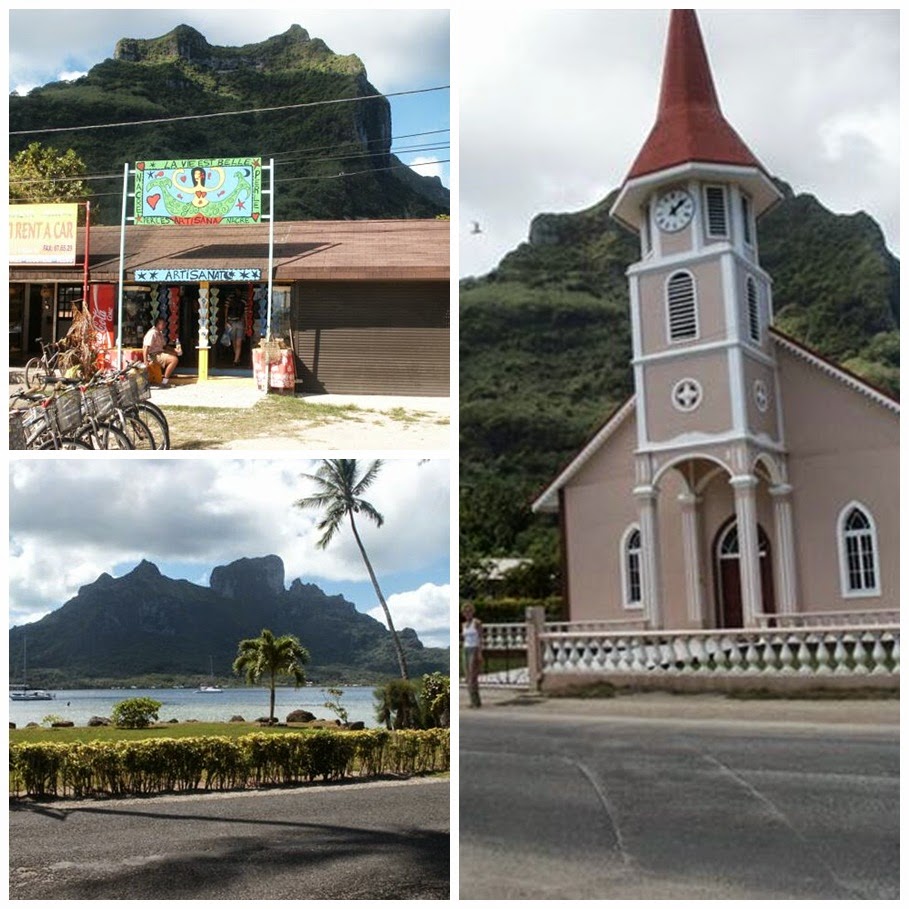 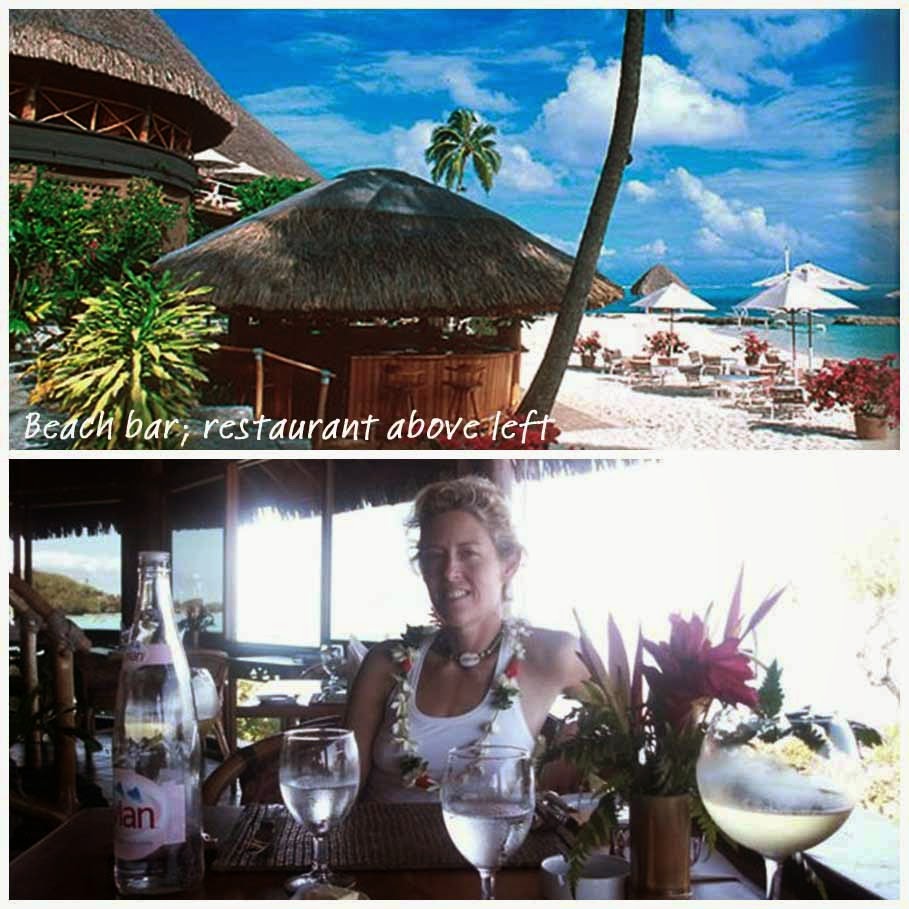 We discovered lots of shops and boutiques scattered about the island. Always ask for shopping information at reception and any staff you speak with. There are hidden gems only they know about. We would never have discovered one fabulous little jewelry boutique with unusual island pieces if we hadn't asked someone for suggestions. It was quite out of the way. Take a look at this little necklace. (I enlarged the photo so you could see the intricate work.) It's hand made with a coconut fiber called coir. It's not just a single piece, but thin strands are wound round and around. The necklace is a really small piece but the coir work is extremely intricate. Unfortunately, most things at this particular shop were terribly expensive because they were so work-intensive, but each of us bought a simple necklace. The bottom photo was a funky (and cheap) ankle bracelet. One of the shells hooks into the loop to keep it attached. I wear it often in the islands on the beach. 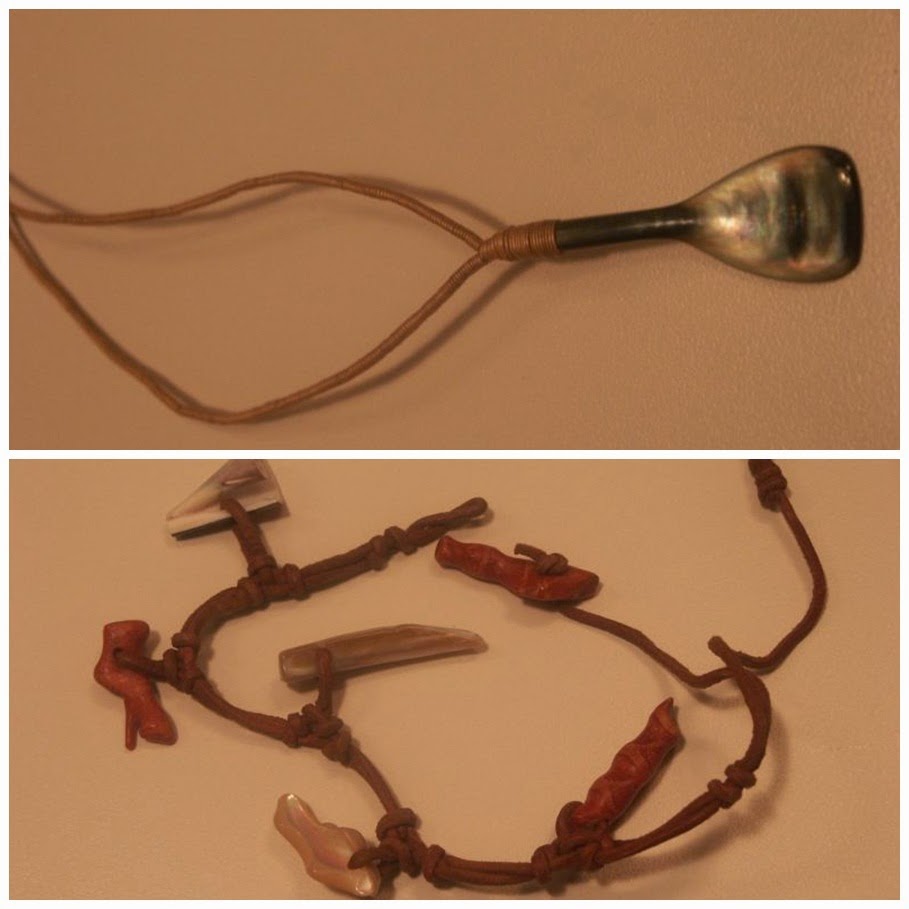 We discovered a gallery that had some lovely things. The tray with the bare-breasted woman has thin glass liner over the art work and is only about 1 foot long. She hangs on a wall in my den. 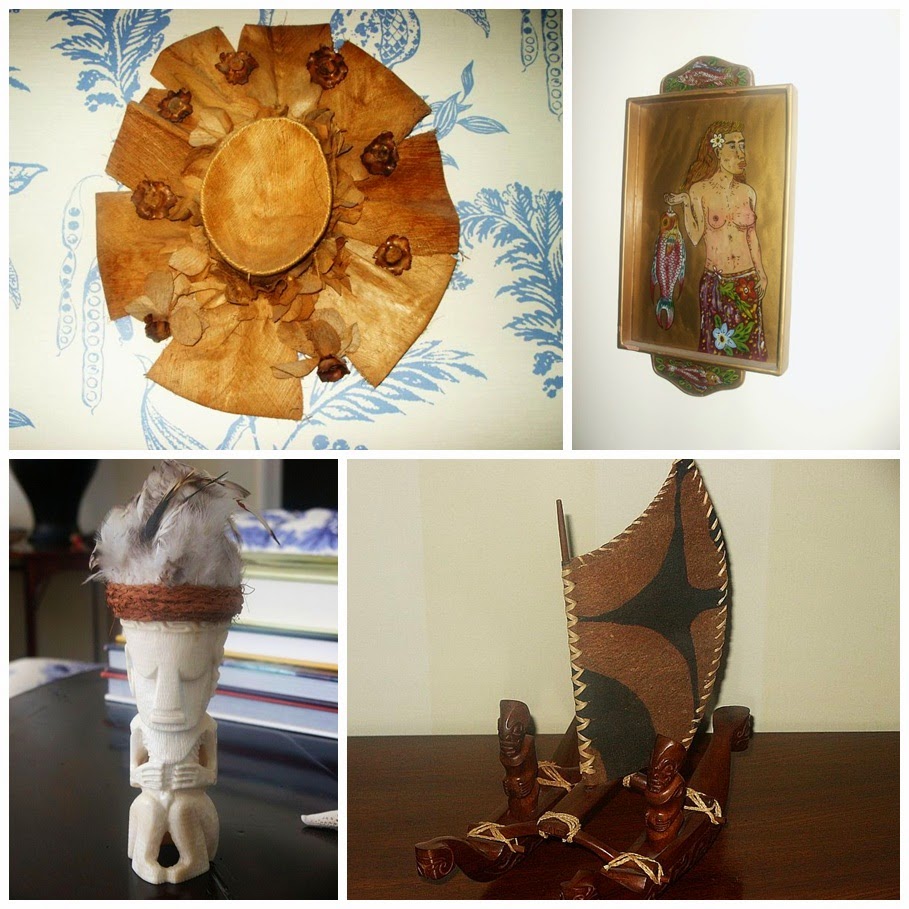 And in the same gallery, off in a corner, a basket contained some tightly rolled up drawings on coconut husks. I couldn't resist, brought three home and had them framed. 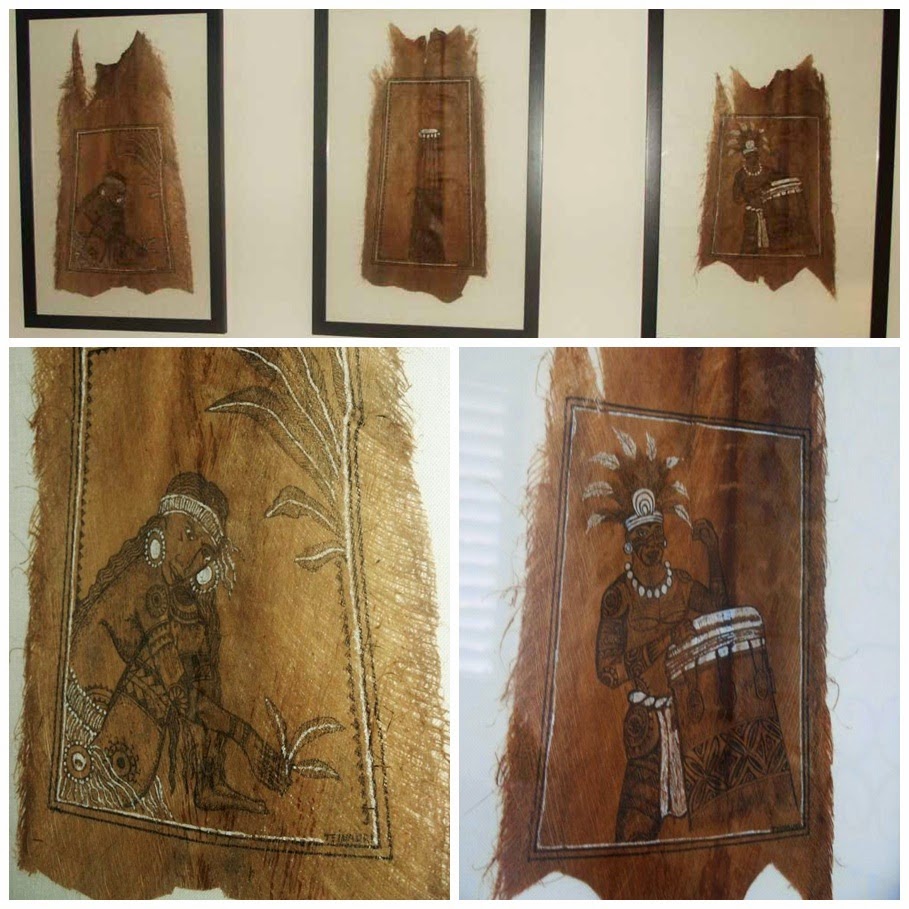 I'm not going to list names of shops because things change so quickly and it's been a few years; I imagine the shopping (and hopefully the food) has been improved even more. After all, Bora Bora is a cruise ship stop; that ought to warrant expansion.


So all in all, shopping is fun on this island....and also at our hotel. We loved our bungalow and for the first time on this trip took advantage of the wonderful spa. It's a shame our dinners weren't good. We had made friends with the manager and after hearing what we thought, actually said: "food is not that important to our guests." What a wrong-headed comment!  I don't know, is it because we're both foodies? Or perhaps honeymooners don't really care about food :), but there weren't very many honeymooners at this particular resort. I imagine it's difficult to find chefs for these out-of-the-way islands, although our first two had excellent food and so did our final stop:  Taha'a.