Whatever sport you're watching on TV, one thing I bet we all have in common is a plate of something delicious to nibble on. Football is our game of choice in the fall and University of Michigan is MY team of choice. (M Go Blue!) Whether college or pro ball, I'm always on the lookout for new game day treats so I thought I'd post a few here and there this fall.

Quite a while back, I came across these spicy little mouthfuls on Big Girls Small Kitchen, a favorite blog of mine. Cara and Phoebe are old high school friends, each living in New York city, which they refer to as "a big city of small kitchens". They have some super recipes and are publishing a cookbook, called Cara and Phoebe's Quarter-Life Kitchen, due out in 2011.

Phoebe's family have been friends with Ina Garten (The Barefoot Contessa) for years and in 2006, in an oft-repeated episode called Good Home Cooking, Cara and Phoebe were guests on Ina’s show, returning from college to a huge platter of gravlox, fresh fruit, and a basket of sour cream blueberry muffins. In 2009, Phoebe actually got to cook a holiday meal with Ina on her show, which I unfortunately haven't seen.

This recipe is Phoebe's. Not only can it be used as a game day bite, it would be a super appetizer for a Mexican or Southwestern themed dinner. Delicious AND healthy. An unbeatable combination. 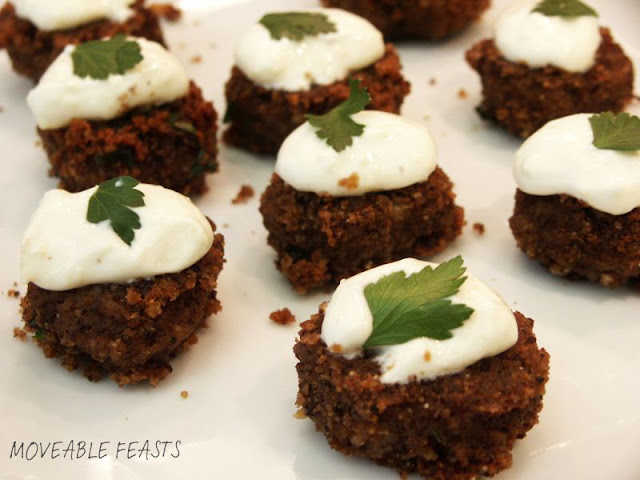 
In a food processor, blend the garlic, 1 can of beans, lime juice, and sour cream until moderately smooth. Transfer to a mixing bowl and fold in the remaining ingredients. Mix until properly combined.

With clean hands, form the bean mixture into 1 inch balls and set aside on a plate. Chill the balls for twenty minutes or so.

For the crema, combine a third of the mango, and all remaining ingredients in a food processor. Transfer to a bowl an fold in the rest of the mango.

NOTE: everything up to this point can be prepared the night before.
Heat a skillet over a medium-high flame, adding a healthy layer of olive oil to coat the bottom of the pan. Once the bean cakes have cooled, remove from the refrigerator. Pan-fry the bean cakes, making sure to press each down into a round patty as you add them to the pan. Cook until dark brown and crispy on both sides. Reserve on a paper towel until cool enough to handle.

Alternatively, you can bake the cakes on a cookie sheet in a 400 degree oven for 20 minutes, or until they have crisped up (the outside will resemble falafel).

Arrange cakes on a platter, and serve room temperature with a dollop of mango-lime crema on top and some torn cilantro leaves for garnish. Makes about 20 cakes.

You'll get the best results if your bread is slightly stale, although I've done it with fresh; you just have to pulse so it doesn't turn gummy. Remove the crusts and tear the slices into pieces; fill your processor about halfway full. Pulse until you get the size crumb you like.

Make more than you need and store the crumbs in zip-top bags in the freezer; thaw them thoroughly before using. In a pinch, if you don't have a machine, rub slices or chunks of stale bread on a box grater.