I've had this recipe for decades! It's so old probably many of you haven't even heard of it. (But I DO hope everyone knows about designer extraordinaire Bill Blass.) And yes, it really is Bill Blass's recipe! Everywhere we went for dinner in the 70's people were serving it. After all, if Bill Blass served it at HIS dinner parties, why not us?

It was even on the menu at Mortimer's in NYC, owner Glenn Bernbaum's public outpost for the rich and famous that closed in 1998.

"Virtually from the day Mortimer's opened its doors in 1976, the restaurant has been ubiquitous in the social columns, attracting an eclectic crowd ranging from Richard Nixon and Henry Kissinger to Mick Jagger and Boy George to Jackie O., Fergie, and Brooke Astor, and even Cal Ripken Jr. Oh, and the parties -- using set designers, Bernbaum could transform his humble saloon, re-creating the Paris Opéra, the Plaza's Palm Court in 1907, or an overgrown wild jungle in the fairly mundane shell of the restaurant."

And when Mortimer's segued into Swifty's, the meatloaf went along; they still serve it, surrounded by mashed potatoes and gravy.


Have you ever been to Swifty's in NYC? I LOVE going there for lunch. Very European in ambiance. It's small (only 60 covers) and so very intimate and cozy on a cold winter's day. Oh...and the food is dee-vine.


Do you know where the name came from? Swifty was the name of Mortimer owner Bernbaum's dog...and the dog was named after Irving "Swifty" Lazar, the Hollywood deal maker.

Sorry, I DO tend to get sidetracked.
Bill Blass's meatloaf is the subject of this post!
Do you think meatloaf is not grand enough to serve to company? Blass disagreed. He served it often to his guests.

"The man who once wrote that blue jeans were 'the most significant contribution America has made to fashion' had no such pretensions about serving meatloaf. Although the provenance of his recipe is unclear, friends suspect he brought it from hometown Fort Wayne, Ind. He felt that simplicity was real elegance."

In Bare Blass, which was finished just weeks before his death in 2002 and published soon after, he said that, after all, this recipe may be the way people most remember him.

And this recipe is the real McCoy, my dears. I always made it free form in a baking dish...which is what the original recipe suggested, although you certainly could make it in a loaf pan if you are a perfectionist.

BTW: Rumor had it that his banana cream pie was divine, but I've never seen a recipe for it. 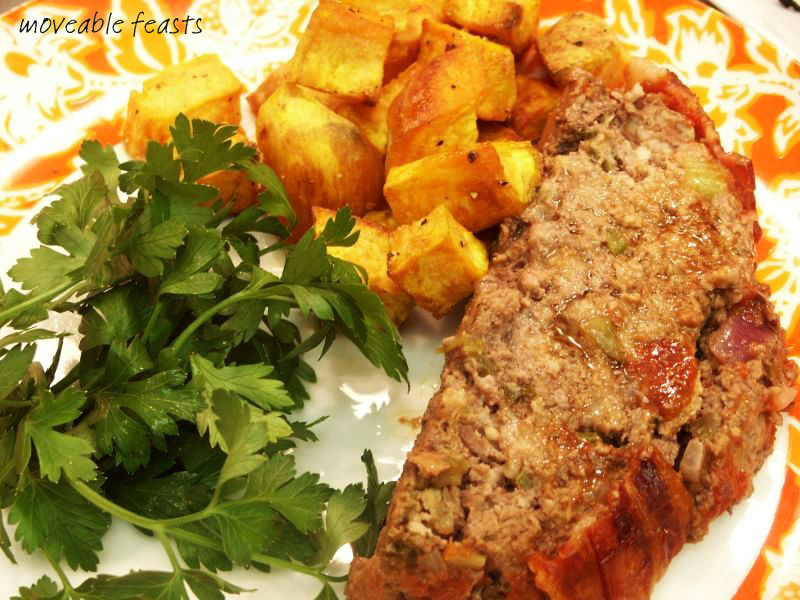 Preheat the oven to 350 degrees.

Remove from oven and let rest 10 minutes before serving. Serves 6-8.

I served it with roasted sweet potatoes the first night (because I had some left over):

and then, last night, the way meatloaf should be served...with mashed potatoes, peas and yes, gravy on the side.


Here's kind of an interesting article about Mortimer's and Glenn Bernbaum:
http://nymag.com/nymetro/food/industry/features/3157/
Posted by Barbara at 2:23 PM