Before we talk recipes, let's get down to some quinoa basics. It's pronounced keen-wa and I've been seeing it all over the food blog world. But this is the first time I've ever made anything with it.  It's referred to as a grain, but technically it's not. It's actually a seed of the Chenopodium or Goosefoot plant. It's used as a grain and substituted for grains because it cooks like a grain. The plant grows from 4 to 6 feet high and the flower heads are branched and when in seed have large clusters of seeds at the end of a stalk.


Beets, spinach and Swiss chard are all relatives of quinoa. I was surprised to see how small the seeds are, not much bigger than the head of a pin.


I like to know a little history about anything new, don't you? If you'd rather not, skip the next few paragraphs.......

Quinoa has been cultivated in in the lush Andes mountains of South America since at least 3,000 B.C. and has been a staple food of millions of native inhabitants. It was known by the ancient Incas as the mother grain and was revered as sacred. Quinoa was so sacred for the Incans they broke the ground with a golden tipped shovel at its first planting to show respect. This grain was also part of their religious ceremonies.

In 1532, Francisco Pizarro, the Spanish explorer, reached the Andes with a small army and in one year's time destroyed the quinoa fields, killed the god-king Atahualpa, and forced the Inca culture into submission.


Under Pizarro's rule they were forbidden to practice any ceremonial rituals that centered on quinoa. Fortunately, quinoa still grew wild in the higher altitudes where it could be hidden from the Spaniards. Small amounts were consumed in secret. Still, the culture of the Incas had been changed forever. For centuries quinoa fell into obscurity until the revival of interest in the 1980's.

At this point quinoa made its way north of the Equator to the United States and Canada and has grown in popularity since then. Two entrepreneurs from Colorado learned of this seed/grain from a Bolivian. They developed test plots in the central Rockies and began test marketing in 1985. However, most quinoa sold in the United States is imported from South America and it can be found in most natural food stores in the U.S. Many countries have now begun to recognize the importance quinoa could play in providing a healthy and sustainable food source for centuries to come. It's been referred to as the "Supergrain of the Future."


The quinoa seed contains an almost perfect balance of all eight essential amino acids needed for tissue development in humans, contains more protein than any other grain, some varities more than 20%! The seeds are also gluten-free, light, tasty, easy to digest and a rich and balanced source of other nutrients. It's still not a common item in our pantries, but if the food blogs are any indication, it soon will be. You can also use quinoa flour to make pasta and a variety of baked goods like pancakes, bread, muffins, and crackers.

When I'm looking for information about healthy eating and grains, I always turn to Heidi at 101 Cookbooks. Don't we all? So I searched her site for quinoa recipes and look what I found:  Big Delicious Bowl; Lemon-scented Quinoa Salad; Warm and Nutty Cinnamon Quinoa; and Quinoa and Grilled Zucchini. She's obviously sold on quinoa!

When you're ready to start cooking with quinoa, be sure to rinse the seeds to remove their bitter resin-like coating, which is called saponin. Quinoa is rinsed before it is packaged and sold, but it's best to rinse again before using. I just put quinoa in a strainer and rinsed it well with cold water, swishing it around. The seeds cook in only 15 minutes. I found quinoa to have a fluffy, creamy, slightly crunchy texture and a somewhat nutty flavor when cooked. 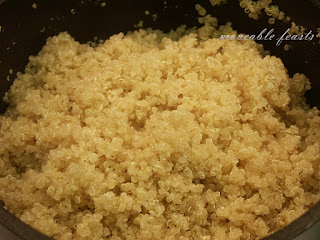 Due to the relatively high oil and fat content of quinoa, the grains and flour should be stored in glass jars in the refrigerator. Use the grains within a year and flour within 3 months.

Now, on to my recipe. It's a quinoa salad, which looked so pretty in the photo (and had bacon on top...while not exactly healthy, certainly pushed me over the edge.  LOL. Don't worry, it's optional.) that I just had to try it. It's quite similar to a pasta salad I make which is what attracted me I suppose. I found this gem of a recipe in Florida Table Magazine, which I love and have blogged about before. BTW: this particular issue features Florida's Top Chefs, one of which, Michael Schwartz, chef/owner of Michael's Genuine in Miami, is a favorite of mine and has just won the James Beard award for Best Chef, South!  Well deserved I might add.  And his pastry chef, Hedy Goldsmith, was a semi-finalist! It's a "don't miss" restaurant if you're ever down Miami way. And you really should subscribe to this quarterly magazine, people. It's a gem.

Anyway, if you've been debating about trying quinoa, this is a great way to start. 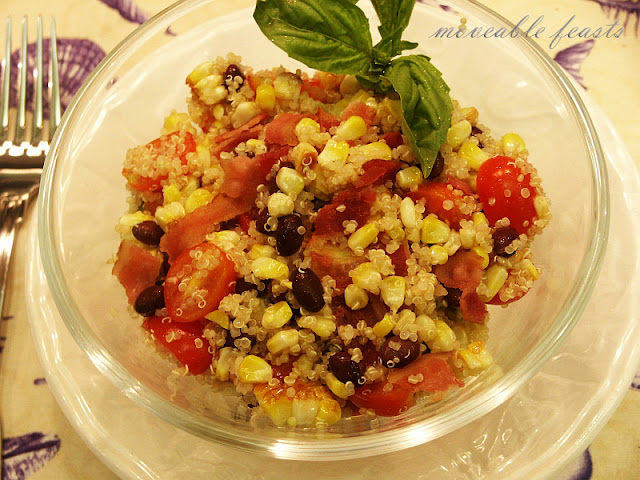 Method:
Soak quinoa in water, covered, for 30 minutes. Drain and rinse well with cold water. Put into a stockpot with 1-1/3 cups water. Bring to a boil then reduce heat to simmer and cook, covered, for 15 minutes. Remove from heat and let stand for 5 minutes, then fluff with a fork and allow to cool.
Roast corn and cut the kernels off. (I drizzled some olive oil on the corn and roasted it, turning once in a while, in a 400° oven for about 20 minutes or until it turned golden. It would be delicious done on a grill.)

Toss the quinoa with the corn, black beans and tomatoes. Make the dressing by blending the olive oil, vinegar, basil and cumin together. Season to taste.Dress the salad with about half the dressing (more if you like) and garnish with basil leaves and crumbled bacon. Keep chilled, but remove from fridge about 30 minutes before serving.
Serves 4.

Printable Recipe
Posted by Barbara at 9:04 AM