My daughter went back to New York City yesterday. It will be lonely around here without her as she is my best friend but she has her own life to lead…. including the fall re-opening of her gallery next week. This first show brings with it hopes for a better year in the contemporary art world. I’m crossing my fingers.


And with her went Prince, her chubby cat, who was visiting for a while. I am not terribly sorry to see HIM go as not only did we have to clear all side tables (and a mantel) of bric a brac (which he was way too curious about considering he is male) but he also had the nerve to bite me twice, the little stinker. And drew blood.

Well scars aside, my daughter and I made lots of new recipes during her visit; she’s an excellent cook considering she has so little time to spend in the kitchen. Because she is not much of a dessert-eater her choices tend to be veggies, fish or chicken. She came to me one day with a Gourmet magazine open to a page featuring a Cornish game hen dish with figs and bacon. As far as I was concerned, those ingredients sounded delish…and luckily I had the figs, some bacon was in the freezer so we were left to purchase game hens and some fresh thyme.
I didn’t see how we could go wrong and I was right. It was fabulous. Although next time I would add more figs as I could have eaten many more- can anything be quite as good as a roasted, caramelized fig? And it was just as good the next night. By the way, don’t you love Gourmet’s name for the recipe? 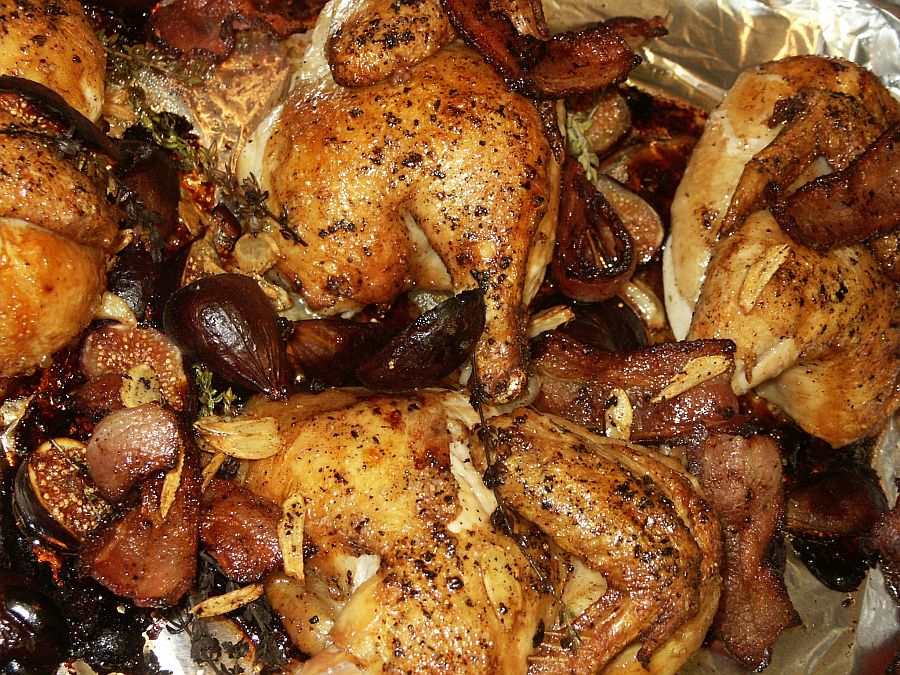 Method:
Preheat oven to 500°. Place rack in upper third of your oven.Cook the bacon in a large skillet until crisp and then drain on paper towels. Add garlic to the pan and cook until golden. Transfer garlic to the paper towels.
Dry the hens and season with salt and pepper. Reheat the fat in the skillet until it starts to smoke and then add the hens, skin side down. Cook about 6 minutes. Transfer hens to a 4-sided baking sheet, skin side up. Reserve the skillet.
Scatter the thyme and figs all over and around the hens. Bake until done, about 15 minutes.
In the meantime, deglaze the pan with the lemon juice, scraping up the brown bits, for about 30 seconds.
Remove the hens to a serving platter, pour the lemon juice gravy over the hens and then scatter the bacon and garlic on top.
Posted by Barbara at 11:44 AM