My family always had sweetened condensed milk on the grocery list. My father called it "goo-goo"- probably because one of us described it that way as a child- and it stuck...my kids still call it that. Dad even liked it on toast and, until the day he died, he had a spoonful of it in his coffee. It was both sugar and cream. Manna. He lived to the ripe old age of 94.

Mother made dulce de leche by boiling cans of sweetened condensed milk for a couple hours then she'd slice it and serve it with cream for dessert. (Are you mentally counting those calories?) I'm too chicken to boil it - why doesn't it blow up?-and mother is no longer here to give me exact directions. We all know the only directions that really count are Mother's. My sister does hers in a pressure cooker- no way I'm doing that either. Then I read someplace about making it in the microwave. Uhhhhh..no.  So while doing a search online for a simple and safe and fool-proof method I came across the recipe for Dulce de Leche Cheesecake Squares at Smitten Kitchen. She has an excellent plan for making the dulce de leche part of the recipe: in the the top of a double boiler. Works for me.

I know.  I'm a tad late arriving at the dulce de leche party (pronounced: dool-say deh lay-chay according to a Cuban friend, who corrected me), but we've been eating it in my family since way back. I just never made it myself. Go figure. So I continued on and made the cheesecake squares. The recipe has already made the rounds so you've probably tried them by now and I'm not saying they aren't good, they're delicious. But if your raison d'être for making them is to savor the flavor of dulce de leche- you can forget it. Mainly you taste the chocolate on top. I know you chocolate fanatics are loving that idea.

Even though I am posting the cheesecake square recipe here, I have a confession: I really wanted to make dulce de leche so I could eventually try Dulce de Leche Brioche. Doesn't that sound divine? I'll keep you posted. And just in case there are one or two of you out there who haven't yet made these cheesecake squares- here's the recipe. Yummy.

Dulce de Leche Cheesecake Squares
(Adapted from a Smitten Kitchen post  in February 2008, who adapted it from Gourmet Magazine, December 2003)

Making dulce de leche:
Pour one can (14 ounce) sweetened condensed milk into the top of a double-boiler. Place over boiling water.

Cook over low heat, stirring occasionally, for 50 minutes to an hour, or until thick and light caramel-colored. Remove from heat. Whisk until smooth. Makes 1 cup. 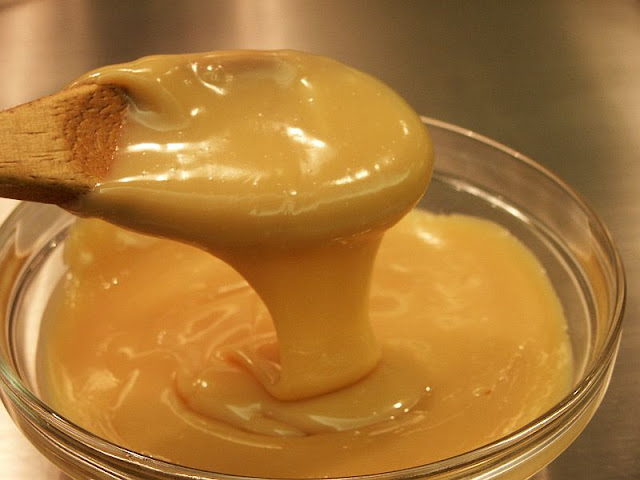 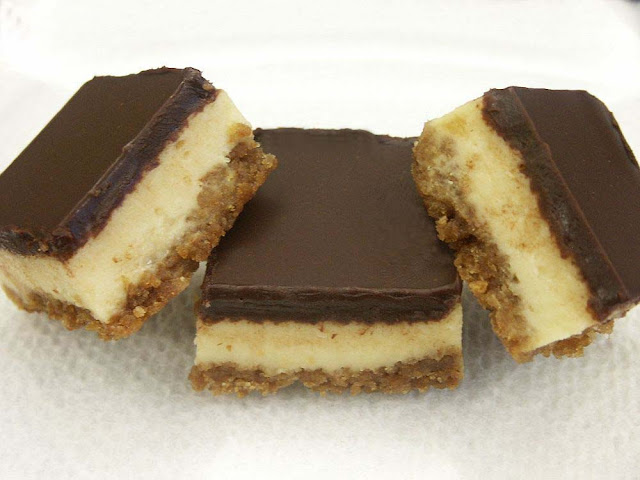 Method:
With the rack in the center of your oven,  preheat to 325°.  Line the bottom and sides of an 8-inch square baking pan with 2 sheets of foil (crisscrossed), leaving a 2-inch overhang on all sides.

Crush the crackers and add the sugar, a pinch of salt, the butter and mix thoroughly.  Press the mixture into the bottom of your prepared baking pan. Bake 10 minutes, then cool in pan on a rack 5 minutes.

Sprinkle gelatin over milk in a bowl and let it soften for 2 minutes. In a mixer, beat together cream cheese, eggs, salt, and gelatin mixture until well combined, then stir in dulce de leche gently but thoroughly. Pour the filling over the crust, smoothing top, then bake in a hot water bath in the oven (leaving the temperature the same) until center is just set, about 45 minutes. Cool cheesecake completely in pan on rack, about 2 hours. Chill, covered, at least 6 hours.

Heat all glaze ingredients in a glass bowl in the microwave for 30 seconds. Stir. Repeat in 10 second intervals until melted together. Give it a quick whip by hand to make it smooth, then pour the glaze over the cheesecake, tilting the baking pan to coat the top evenly. Chill, uncovered, 30 minutes.

Lift cheesecake from the pan using the foil overhang and cut it into 1-inch squares (anything bigger is just too rich) with a thin knife, dipping and cleaning off the knife in hot water after each cut. (Don’t skip this step! A clean knife is essential if you want your squares to look pretty and not have chocolate smeared down the sides!)
Makes about 64 one inch squares.
Note: you can refrigerate the cheesecake (without the glaze) for up to 3 days.
Posted by Barbara at 9:59 AM