Do you have baking guru? I do. It’s Maida Heatter. She is the queen of desserts, hands down, no contest, end of story. If you love all kinds of desserts, cookies and sweet breads, then you MUST own every one of her cookbooks. It’s a necessity.

If the name Heatter rings a bell, that’s because she is the daughter of radio commentator Gabriel Heatter who became famous during World War II broadcasts with his: “There is good news tonight.” catch phrase.


Maida never started out to be a chef – she didn’t even attend a culinary school - but she credits her great baking talent to her mother, trial and error and her love of good cookbooks. Her favorite? Mildred Knopf's The Perfect Hostess Cook Book. I'd never even heard of it but am going to the library ASAP to see if I can get it. Maida actually has a degree in fashion illustration and was simultaneously designing and making jewelry as a hobby- which soon turned into a business. She married pilot Ralph Daniels in the late 40’s and in the 60’s when her father became ill, she and her husband came up with the idea of opening a coffee shop in a chic Miami Beach neighborhood.


The coffee shop was named Inside and Maida made all the pastries served there. It was quickly a hit and soon grew into a full scale restaurant. I didn’t move to Florida until 1970, but my parents lived here from 1958 on and my mother had heard about Maida Heatter through word of mouth- the best way to get inside info- and had been to her coffee shop. She became an instant convert. Maida was also teaching baking classes and at one point in the early 60’s, she taught at Burdines, a local department store. I am still amazed Mother did not drive to Miami Beach (which would have been about an hour away) just for Maida's classes because Mother was a superb baker- as was her mother before her (and, in fact, owned a bakery in Detroit in the 20's). As it was, Mother took every baking and cooking class available in the Ft. Lauderdale area.


Anyway, one day Craig Claiborne (who was then food editor of the New York Times) tasted Maida’s desserts and talked her into writing a cookbook. Her first was titled Maida Heatter’s Great Desserts and was published in 1974- the same year she and her husband sold the restaurant. She has since been the recipient of two James Beard awards and has written several more cookbooks, of which I have every single one. Now in her 80’s, she is still baking away in her Miami Beach kitchen, as energetic as ever.

Maida Heatter’s recipes are precisely written and a snap to follow. And I'm not kidding. There is usually a story behind each recipe-such fun to read- plus tips and options; her descriptions have you drooling and dying to try anything-no matter how involved the recipe. Complicated recipes that you might have found daunting are made simple with her detailed directions. It’s impossible to screw up the recipe as long as you do as she says. Exactly.

Do I have a favorite? Couldn’t possibly choose just one. I can narrow it down a little: I do love her sweet breads. And something else: she is a chocoholic (she has one book with nothing but chocolate recipes) so if you are a chocolate lover be prepared- you will go nuts.

A few weeks ago I made her Date Espresso Loaf for my daughter and then sat back and watched her face. It had two of her favorite things in it: chocolate and espresso. She did a double take as all the different flavors registered and then begged a second loaf to take back to New York. And this from someone who really is not a sweet bread aficionado. So you gotta know how good this is. Every single time I have served this particular loaf, people are intrigued and it’s always the first empty plate on my buffet. I have written out the recipe so much I know it by heart. While it’s not MY favorite of Maida's sweet breads, it appears to be everyone else’s.
I often serve it with cream cheese- which seems to top off the flavors nicely and a little tip when you do make it: it needs to be sliced when very cold. The good news? It freezes perfectly. Don’t you love it when you can freeze things? I usually make this in two small loaf pans, use one and freeze the other. In fact, my freezer has several of her sweet breads in it all the time. I'd give anything to know what's in Maida’s freezer! 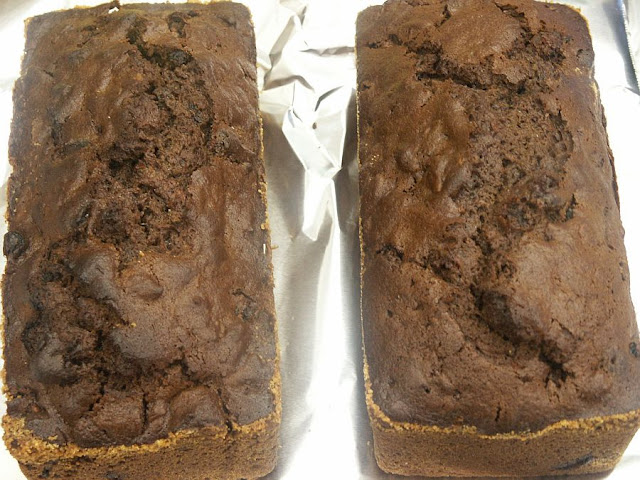 
Method:
Preheat oven to 350°. Adjust rack 1/3 up from the bottom.
I make this in two small loaf pans but Maida suggests a 10 1/4 by 3 3/4 by 3 1/2 inch pan. Butter the pan/pans and dust with bread crumbs.
With scissors, cut the dates crosswise into 1/3 to 1/2 inch pieces; make certain no pits escape. Put the dates into a bowl and in another bowl stir the baking soda into the boiling water. Add to the dates along with the espresso granules. Mix and let cool to lukewarm. Sift together the flour, salt, baking powder, cocoa and set aside.
In a large bowl of a mixer, beat the eggs only to mix. Add the oil, sugar and vanilla and beat only to mix. Add the date mixture and beat only to mix. On low speed, add the dry ingredients and beat only until incorporated. Remove the bowl from the mixer and stir in the raisins and nuts. Turn into the prepared loaf pan/pans and bake for 1 hour and 10 minutes. (If you use the two smaller pans, this time will be shorter.) Once during baking reverse the pan. Watch the color of the cake during baking; if the top shows signs of darkening too much, cover the pan loosely with foil. Bake until a cake tester, inserted in the middle all the way down, comes out clean. Let the cake cool in the pan for about 15 minutes. Then invert the pan on a rack, remove the pan and let the cake cool upside down on the rack 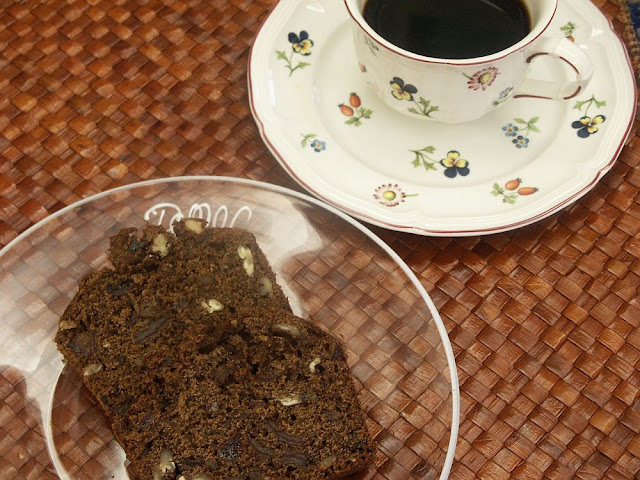