Sometimes you get lucky. Sometimes you're immediately accepted and welcomed into the magic family circle when you marry. I was one of the lucky ones. I adored my mother and father in-law and better yet, there were four siblings- 2 sons and 2 daughters and I loved them all. Three of them are no longer with us which makes me infinitely sad. There was so much laughter in that family. Not that we didn’t have our share of really noisy arguments, but nobody took them seriously.

Aunt Hat was one of my sisters-in-law. When I first met her, she and her family lived on Pine Lake in Michigan- in one of those wonderful old winterized lake homes that abound in that area. She loved nothing better than to have a houseful of people around in the summer. Along with her husband and sons she welcomed all her extended family (and there were a lot of us) to visit anytime we wanted. We spent many summer weekends gossiping, griping, eating, joking, lazing, swimming, water skiing, sailing- you name it- on the lake. I gotta tell you: this family was the craziest bunch of sun-worshipers I ever saw. No matter the season, they drank up every bit of sun available. They even used the old tin foil reflection trick in the dead of winter. In the snow. No kidding.


Being the youngest of the wives (also the most naive) I would listen with interest, shock, embarrassment, or amazement at their observations on life, family and friends. This was not exactly a fainthearted group so I had to learn fast how to hold my own. Hat’s house became both a refuge and an escape for all of us.

Odd the things I remember about that house; I always want to call it a cottage, because it was on a lake. But it wasn’t, it was a home. A big, old comfortable home. And what do I remember best? The dining room table. Seriously. It was an antique pine lazy susan table. I was mad for it. In fact, I searched all the local antique shops for years, never to find another like it. It sat 10 people at least. That twirling lazy susan center would whip around so fast it made your head spin. You really had to be on your toes.


The Pine Lake house was filled with fun AND the most gorgeous antique pine furniture I had ever laid eyes on- all done with Hat’s fabulous taste. But casual- not stuffy. I wonder now if she ever longed for peace and quiet on those summer weekends; although I sure hope I never went without an invitation. 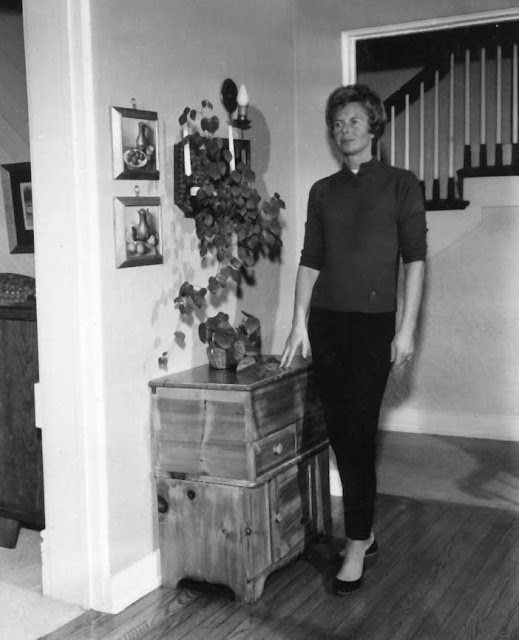 Hat had help around the house- a long suffering maid named Abel (pronounced long A-bell) who pretty much ran everybody’s life. She often walked around with a cigarette dangling from her bottom lip. I remember being at a cocktail party once and we watched (making bets all the while) as the cigarette ash grew longer and longer to eventually drop in the middle of a plate of hor 'd oeuvres she was passing. She was a piece of work, everybody’s best friend, a Godsend, a hard worker, a love, famous for her fried chicken and a character to be dealt with- who gave as good as she got. She had to- we were a boisterous group, underfoot all the time- all ages from babies on up.
Aunt Hat never had (and I don’t think ever wanted) a reputation as a fabulous chef - nonetheless meals at her house were always a treat- often as simple as salad, steak and potatoes- standard fare for the 60’s- and lots of barbecues.

But in the end- everyone loved her brownies. In all these years, this is the one recipe of hers I still use. And a simpler recipe you couldn’t find. For some reason, none of us really liked nuts in our brownies so these are rich, dark, moist on the inside, crunchy on the outside type brownies. Not a fancy gourmet brownie, just a simple treat everyone loved. If I am asked to make brownies for my family, I make these. I have tons of other recipes- Maida Heatter’s Palm Beach Brownies come to mind- which I would make if I wanted to really impress a group. But if it’s just a basic brownie- this is it. You can make them with a hand tied behind your back- which is pretty much the way Aunt Hat made them- probably holding the phone with the other hand and holding off the dog with one foot. Better yet, you can make them by hand in one bowl. Leave the mixer in the cupboard. 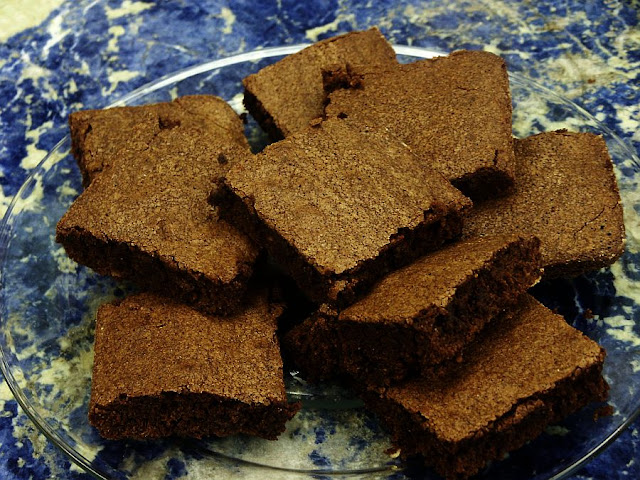 Method:Preheat oven to 350°. Butter and then flour a square 8 by 8 by 1 1/2 inch baking dish.Cream the butter and sugar and add the eggs one at a time. Add the flour, vanilla and then the chocolate.Pour the mixture into the prepared pan and bake for 25 minutes. Cool before cutting.Makes about 9 brownies, depending on how you cut them.