At Christmastime in most Italian homes you will find Sbrisolona on the table, which traditionally brings good luck to the family.

"Sbrisolona comes from the Mantova dialect and means ‘sbriciolare’ ‘to crumble’, because of the very crumbly consistency of the cake. This recipe originated around 1600 in the grand Gonzaga court of the Duchy of Mantova, and soon became popular throughout the more modest houses of the Po Valley. It is said that walnuts, which are more typical of our area, were originally used instead of almonds. But walnuts were meant to be the ‘fruits of the witches’, while almonds have luckier significance, meaning ‘light’ and ‘rebirth’. Hence the change of ingredient!"

It really looks like a giant cookie and is quite crisp...you certainly can't slice or cut it. Best to place it in the center of your table and give it a tap with a light hammer or heavy knife handle. (Someone suggested using your fist! Effective, but messy.)Not too sweet, a little salty, brittle and very nutty. Served with coffee or a dessert wine, it's lovely. Get your kids or grandkids involved in the creation of this charming Italian tradition...it's so easy to make. And don't forget to give everyone a spoon so they can scoop up all the crumbs....the best part.
I used Gayle's recipe which she adapted from Sunday Suppers at Lucques by Suzanne Goin. 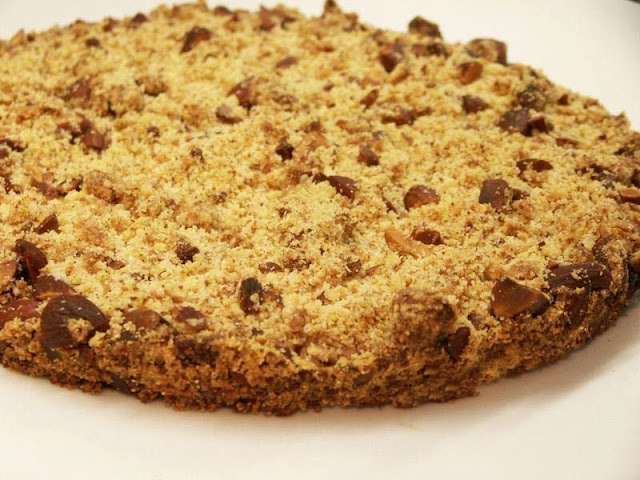 Toast the almonds for about 10 minutes until golden. Coarsely chop into bite-sized pieces.
Combine the egg yolk, orange zest and the extracts.
Separately, whisk together the flour, cornmeal and salt. Cut in the butter with a pastry blender or rub it in with your fingers (which is what I did) until the mixture resembles coarse meal.
Stir in both sugars and the chopped toasted almonds.
Pour the egg yolk mixture on top and work it in gently with your hands. The dough should be very crumbly and look like streusel.

Pour the crumbs into the prepared pan and loosely press the crumbs mostly around the edges and just very lightly across the top; the surface should be uneven and dimpled.

Bake for about 40 minutes or until it is a deep golden brown. Transfer to a rack and cool completely before unmolding. Place on a platter, break however you choose and enjoy! 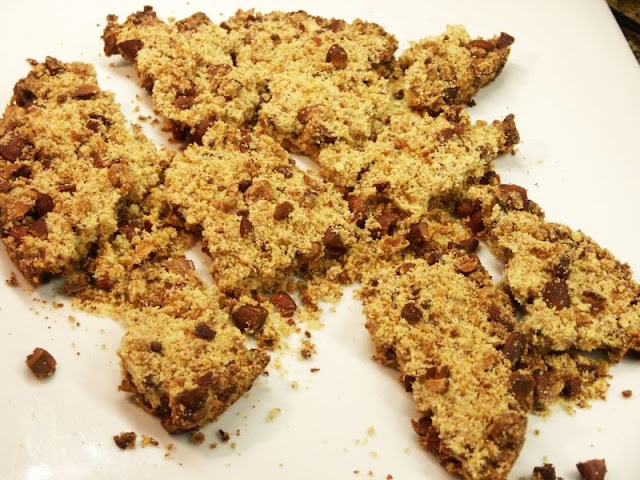