Welcome October! And the golden maple trees, the chill in the air, football, apple cider and donuts....all the things I miss from my Michigan years. Yes, we get fall in South Florida too, but you have to look very carefully. No cool temps to alert you, at least not until November or sometimes even December. So I live vicariously through all of you and search for apple and pumpkin recipes, hoping they will make me feel like it's October. Difficult when it's 90 degrees outside!

This recipe is my first pumpkin recipe since last fall. The ingredient list makes it look more involved than it really is and the results are well worth the little bit of fuss. Besides, it didn't take much time at all. Haven't made a poke cake since something lemony that was all the rage years ago, so this was fun. Such a moist pumpkin cake to begin with and then you add that marvelous warm cinnamon-vanilla custard. Ah yes, the house smelled like fall while this was baking! 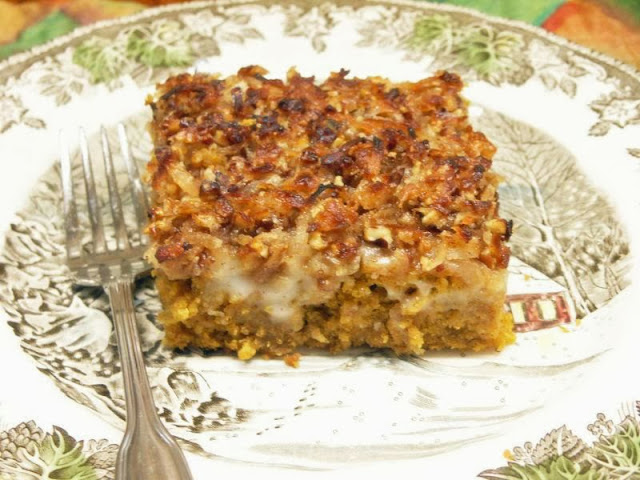 Method:
Preheat oven to 350 degrees.
For the cake: make a foil sling for an 8-inch square pan: cut two 16-inch lengths of foil and fold them to widths of 5 inches each. Fit foil pieces into baking dish, one overlapping the other, pushing them into corners and up sides of pan; allow excess to overhang pan edges. Cut two more pieces of the same size and arrange them in the same way, except perpendicular to the first two. This creates a sling that will help you remove the cake after baking and cooling. Spray foil lightly with nonstick cooking spray.

Combine the oats, pumpkin puree, and water in medium bowl and let sit until water is absorbed, about 5 minutes. In a medium bowl, whisk the flour, baking soda, baking powder, salt, cinnamon, and nutmeg together.

Pour the batter into the prepared pan and tap it against the counter a few times remove any air bubbles. Smooth the surface with a spatula. Bake the cake, rotating halfway through baking, until a toothpick inserted into center comes out with few moist crumbs attached, about 28 to 32 minutes. Let the cake cool in the pan for about 10 minutes while you make the custard.

Method for the custard: Melt the butter in a skillet over medium heat. Remove from the heat and stir in the flour until it’s blended. Add the milk and then return to the heat, stirring as you add the sugar. Continue stirring, bringing the mixture to a boil and boiling for about a minute. Remove from the heat and add vanilla, cinnamon, and cardamom. Let the mixture cool for a few minutes as you use the handle of a wooden spoon to poke holes every inch or so over the cake. Pour the warm custard over the cake evenly. Let the cake continue to cool while you make the icing.

Method for the icing: Move the oven rack to around 9 inches away from the broiler heating element and preheat the broiler. In a medium bowl, whisk together the brown sugar, cinnamon, melted butter, and milk. Stir in the coconut and pecans before spreading the mixture evenly over the top of the cake. (It reminds me of the German Chocolate Cake Frosting) Broil the cake, keeping a close eye on it and rotating as needed, until topping is bubbling and golden, about 3 to 5 minutes. Let the cake cool in pan until it’s cool enough to pop into the fridge. Chill it for at least 2 hours before serving. Use the sling to pull the cake gently out of the pan. Cut it into squares and transfer to a platter or serving plates. You can heat each serving for 30 seconds to a minute in the microwave before serving to remove the chill.

*Cooks notes: Do not use old-fashioned or instant oats for this recipe. Be sure to use a metal baking dish. You'll find a vertical sawing motion with a serrated knife works best for cutting through the crunchy icing and tender crumb.