Quite some time ago, while watching the Two Fat Ladies cooking series reruns, I was intrigued by a salmon recipe one of them made, attributed to Robert May. If you're familiar with their series, it was in Episode Two, Season Two, the Vintage motorcycle rally in Hesket, New Market. I've made the dish many times since and thought to share it with you today.

Robert May was born in 1588 and was an English Chef who trained in France. His father was also a chef and May was sent to Paris at the age of 10, for 5 years, to train as a chef. This was probably due to the fact that he was catholic and his parents wanted to protect him from the unrest in England at the time. After May served an apprenticeship in London, he came back to work for his father, one of several chefs doing so. Following that, Robert moved around the country serving in other "suitable" (meaning aristocratic and Catholic) households, one of which was  Sir Anthony Browne, Viscount Montague, England’s Ambassador to Rome and a Knight of The Garter. His country estate was Cowdray House, west Sussex.
During the period of the English Civil War, May began work on his book, The Accomplisht Cook, though it was not published until the year of Charles II's restoration (1660), by which time Robert May was already 72 years of age. His cookbook was an extraordinary thing at the time as chefs jealously guarded their secrets and this was the first substantial recipe book to be published in England. Over the following years Robert May updated the book, with the 1665 edition (about the fifth) being the final one that he edited himself. Robert May died in his 80s in 1664/1665. 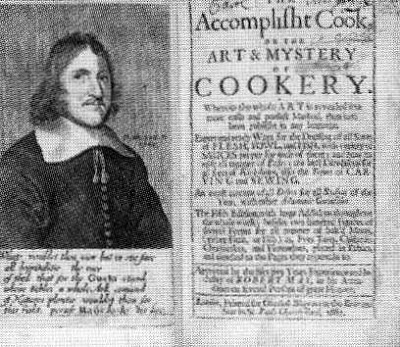 Deana, from Long Past Remembered, has several posts on Robert May and his recipes. And if you know Deana, you know she's the dedicated authority on all chefs and recipes past. She'll have much more detailed information on Robert May. Be sure to check out at least one of her posts HERE.

May's poached salmon dish is quite perfect, the orange a marvelous foil for the salmon and it's made with only two ingredients, (aside from the salmon) which you probably have in your pantry already. The only pesky thing is peeling and slicing the oranges. :) So as a shortcut, if you're cooking for one or two, just use the wine and orange juice and save the orange slices as a presentation feature when you have company. You'll notice very few measurements here as The Two Fat Ladies were annoyingly vague in that department, although I do think they put out a cookbook at the time. You'll have to do some guessing, depending on how much salmon you use. This particular recipe serves two.

BTW: Not the first time I've posted something from The Two Fat Ladies series (see Spatchcocked Game Hens) and we love both recipes. 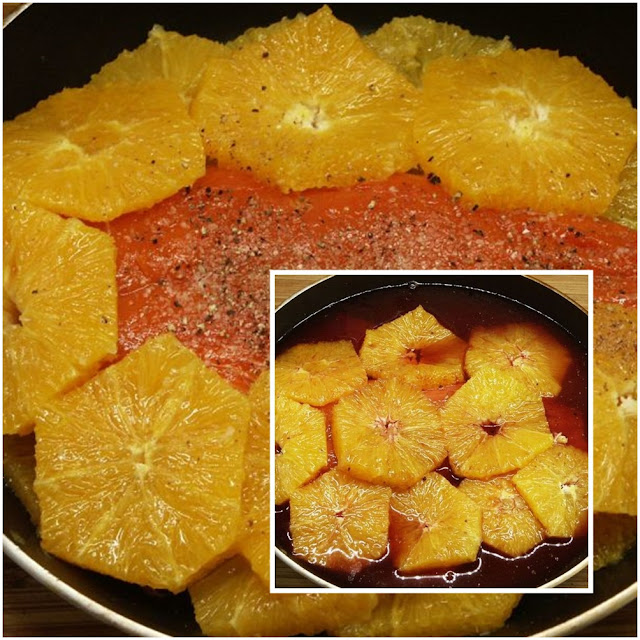 Method:
Peel the oranges and slice. Place a layer in a skillet or pan and lay the salmon on top. Lay more orange slices around the the salmon and then add salt, pepper and nutmeg to the very top of the salmon. Finish by topping with remaining orange slices. Pour orange juice over the top and then red wine.
Place skillet on the stove, cover, and poach for about 10 or 15 minutes. Watch carefully. Much depends on the size of your salmon. Nothing is worse than overcooked fish!