Palm Beach County, Florida, where I've lived since 1970, is fortunate to have the The Morikami Museum and Japanese Gardens. It's been a center for Japanese arts and culture in South Florida since opening in 1977. You can explore a series of six diverse gardens inspired by a different historical period and style of Japanese gardening.  They offer world-class exhibits, varied educational programs, a true Tea Ceremony, seasonal events and a bonsai display. They have a decent little restaurant too.
Chieko and James Mihori have been the heart and soul of this museum since the beginning. I used to do a lot of volunteer work there so am very familiar with the museum and all it offers. Naturally, local clubs take advantage of this museum right in their back yard. Recently, our Garden Club went there for lunch and an hour tour. While there, I recalled that every February, Chieko Mihori gives a floral demonstration of Sogetsu Ikebana. Chieko is the Director of Sogetsu Florida and coordinator of Sogetsu North America east coast.

Are you familiar with Ikebana? It means "giving life to flowers" or "arranging flowers" and is a very disciplined art form. The history of Ikebana dates back to approximately 500 years ago. We're not talking about merely putting flowers in a vase, but using all parts of the flower.....including the stem, leaves and even the branch.....with emphasis toward shape, line, form. In the beginning, Ikebana was very simple, constructed only with stems of flowers and evergreen branches. Rather a silent and reverential pastime. Completely minimalist.

Of course, like most things, Ikebana has grown with the times and there are now many forms of Ikebana. Sogetsu Ikebana was founded in 1927 and while practicing any Ikebana means following established forms, the Sogetsu School is not as disciplined. You can use any material and display it anyplace that brings pleasure to the eye. Modern contemporary life is reflected in Sogetsu Ikebana with emphasis on individual expressions. Natural and manmade materials are widely used, often in unexpected ways. Some of the pieces can be enormous and used in commercial venues. Students often make their own containers and give special attention to the environment in which the work is placed. Chieko mentioned she had taken a pottery class and in the demonstration, used several containers of her own design.

Last year, Chieko received an award from the Emperor of Japan: she was conferred with The Order of the Rising Sun, Gold and Silver Rays in recognition of her long-time dedication as a trustee and board member of the Morikami Museum & Japanese Gardens and also in acknowledgement of her commitment to promoting Japanese culture throughout the United States. Here's Chieko with some of her work: 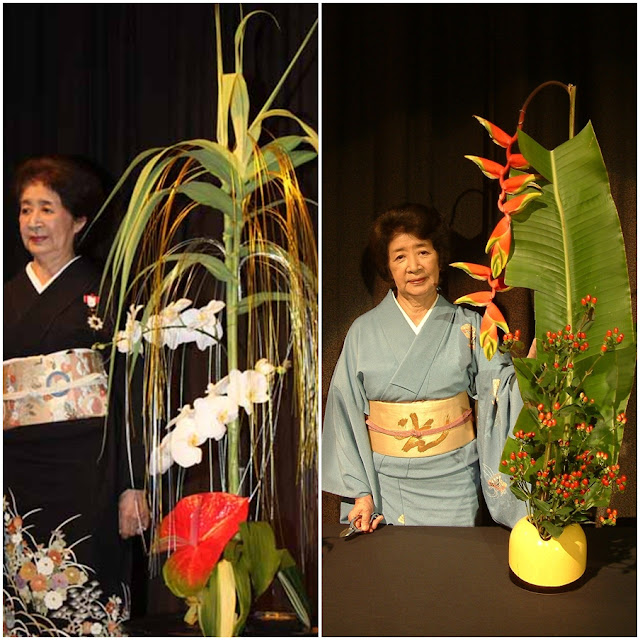 Once I had the date pinned down, I bought tickets and we went to see the demonstration. It lasted an hour and 45 minutes and it was every bit as fabulous and inspiring as I remembered. We loved every minute of it. An added bonus: students of the Sogetsu classes there had their work on exhibit throughout the lobby.
The auditorium was packed to the gills, as it always is when Chieko appears. There was such a crowd surrounding the arrangements after the exhibition, most with professional-type cameras, that I wasn't able to get close enough to take a photo of each one. And then we had to leave for a luncheon engagement. Sadly, I only had my iPhone with me. Sorry about the quality, but you can get the general idea. Chieko made about 12 arrangements and my favorite was the one made in two combined baskets. (lower left) She used two branches of quince along with assorted flowers and it was a miracle of balance. She has a delightful sense of humor and fun, teaching her audience while working. It gives one hope, after watching a master like this change her mind mid-arrangement, or have problems making the flowers and stems do as she wished. All in all, a morning filled with flowers and smiles. 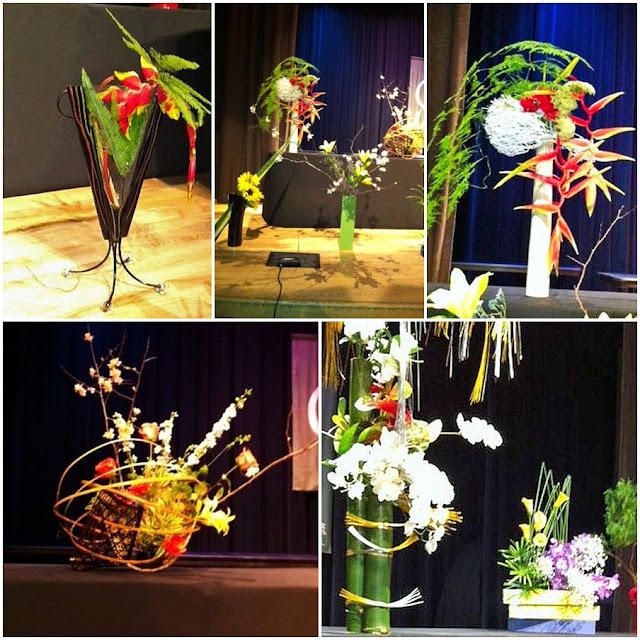 For more examples, better photos and some surprises as to size and material, here are some photos of Sogetsu Ikebana from the internet: 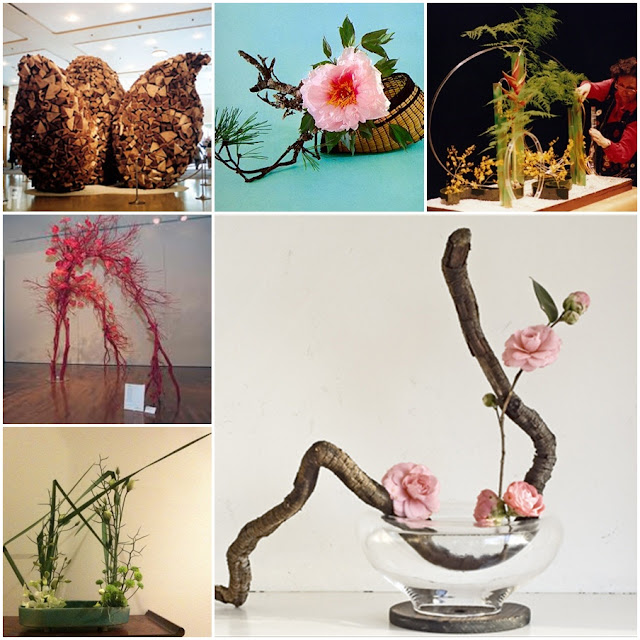