I think the best popovers around are served (gratis, yet) at Neiman Marcus restaurants. They're hot, huge, crisp on the outside, airy and eggy inside. Perfection. Served with their strawberry butter (which my daughter can't stand), I love 'em.
I've made popovers at home now and then and use a simple recipe I've had since the 60's...a very basic popover batter, a cold oven and then bake in high heat for 30 minutes. But I've been eyeing this recipe for a while, had some leftover Gruyère, so I made them. Warming the milk was a little different as was leaving the Gruyère in chunks rather than grating it.
But I must admit, they're really good. The Gruyère kind of melts all around inside (and some outside) the popover. You've got to serve them right out of the oven; once cold, like all popovers, they're boring, boring, boring. 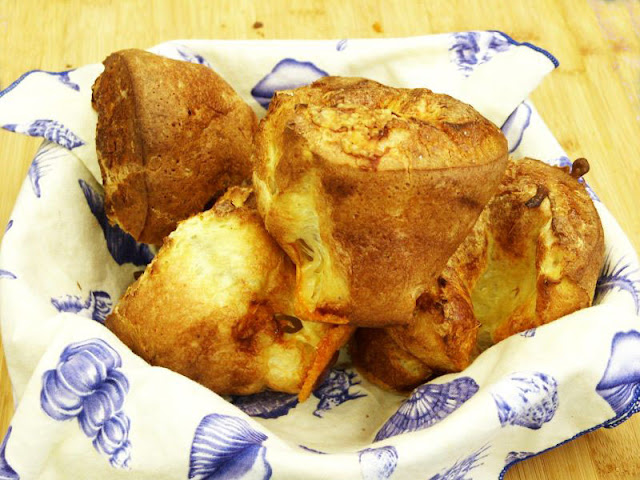 Method:
Preheat the oven to 375° and position a rack in the bottom third. Place 2 muffin pans (or enough to make 16 popovers) in the oven to warm.
In a small saucepan, warm the milk over medium heat until it is hot (about 125°) but not boiling. Remove from the heat. In a large bowl, whisk the eggs with the salt and black pepper until smooth. Slowly whisk in the warm milk. Add the flour and whisk until the batter is just combined. (It may be slightly lumpy.)
Remove the muffin pans from the oven. Spray the pans generously with nonstick cooking spray. Divide the batter evenly into each of 16 muffin cups. Set a cube of the cheese on top of the batter in each cup.
Bake the popovers until puffed and deep golden brown, about 40 minutes (do not open the door or they may collapse). Remove the popovers from the pans, sprinkle with the grated Gruyère and serve immediately. Makes 16.

Just look at that melted Gruyère inside! Yummmmmm. 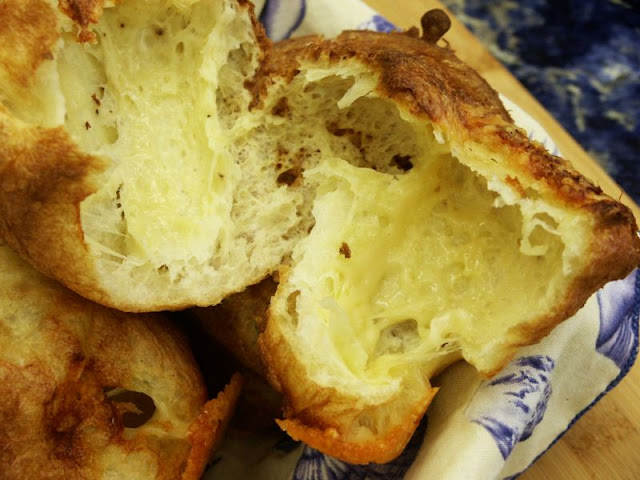 Addendum: My DIL sent me this photo of my Michigan grandson's first day of kindergarten. He was excited and loved every minute of it. He told me about it via Face Time that night.
She cried. 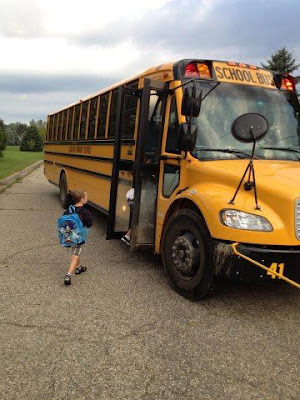