If you raised a family in the 50's, you'll know all about this series of paperback cookbooks. I used them constantly when the kids were little, still have every single one and still make our favorites from them. If this series is new to you and you'd like some make ahead meals for your busy life, this will be a fun addition to your cookbook library.

Homemaker Barbara Goodfellow was the wife of a Navy Admiral who didn't want to be stuck in the kitchen cooking when she could be with her guests in the living room. She put together a bunch of recipes that could be prepared ahead of time and cooked in an oven without further attention. She self-published her first Make it Now, Bake it Later cookbook in 1958. (Half of all proceeds devolving to Mrs. Goodfellow were donated to the Cystic Fibrosis Foundation.)

The first book and its subsequent five sequels went on to sell 1.5 million copies. Barbara died a few years ago, but her family still receives numerous requests for recipes from the original books - even though they've been out of print for 20 years. However, you can buy them (used) at Amazon.

One of the retro giveaway prizes today will be the first three cookbooks, numbered 1-3, plus the last three which are combined in one book, so you'll get three smallish paperback books and one thicker one. 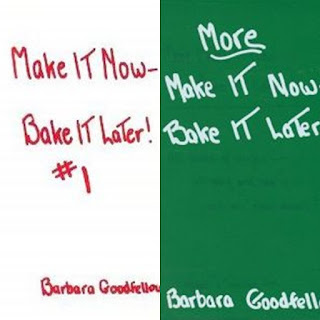 The second retro giveaway has all six of Barbara Goodfellow's cookbooks under one cover. 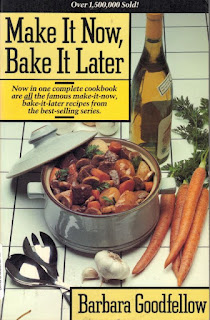 (You might be interested to note there is also a "next generation" book: Barbara's son, Scott, and his wife, Ann, revived the Make it Now, Bake it Later phenomenon. It includes more than 200 new recipes that have been updated for today's palate, as well as a few of the most-requested recipes from the original books.)
************************************To illustrate I made an easy peasy side dish: White Rice Browned. Because using browned butter is all the rage right now, perhaps this retro dish isn't quite as retro as one might have thought. Have you ever read shorter directions? And yes, I used salted butter....which I'm fairly certain was all that was available back then. It's even better warmed up the next day.
White Rice BrownedFrom Barbara Goodfellow's Make It Now, Bake It Later 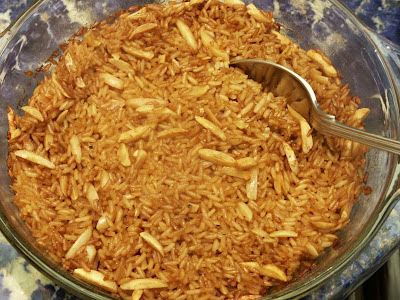 
Melt butter and brown the rice and almonds. Place in casserole and add seasonings and water and consomme. Bake 300 for 1 1/2 hours, stirring occasionally.

Two of you will win these fun, retro cookbooks. All you have to do is leave a comment. Sorry guys, but U.S. and Canada only please! And make certain I have your email address. I'll announce the winners July 29th, so you don't have much time.