Nigella Lawson is the daughter of Nigel Lawson, the former Chancellor of the Exchequer, and Vanessa Salmon, a socialite, celebrated beauty and heiress to the J. Lyons & Co. fortune. She reports her mother was the kind of cook whose food tasted fine, but she didn't bother with appearance and never consulted a cookbook in her life.
"When I was growing up my mother had eating disorders. Thinness mattered a lot to her. It was anorexia and a period of bulimia, I think, I can’t be sure. She became a pusher of food and family meals were a source of great stress, an endless power struggle. I vowed I was never going to be  like that."

Nigella worked for Harrods in her student days, which she liked because of the "feeling of belonging" it gave her. Lawson did a lot of reading and wanted to write the great novel of the 20th century. She has often spoken about how unconfident and melancholic she was as a youngster; how dumpy and lonely she felt.
"My parents were very young, and more interested in each other than in us."
Nigella eventually secured a place at Oxford to read Medieval and Modern Languages, achieving a Masters degree in the subject.

Nigella was indirectly helped by her father and his Tory colleagues in her chosen career: she joined the Sunday Times literary team. In 1986, she became the deputy literary editor of The Sunday Times, before turning freelance and writing for such publications as The Guardian and Daily Telegraph. It was when Charles Moore, then editor of the Spectator, asked her to write about something else that she first stumbled into food. She became the magazine's restaurant critic.
During her time with the Sunday Times, Lawson met journalist John Diamond who was also writing for The Times. They married in Venice in 1992 and had two children together: Cosima and Bruno.

Lawson conceived the idea of writing a cook book after she observed a dinner party host in tears because of an unset crème caramel. How to Eat was subsequently written in 1998. Then, the idea for the first TV show came about because a glossy UK magazine wanted to run an excerpt.
Nigella: "The book had no pictures, so we did a shoot in my home for the magazine. We really had fun; I had my kids there, and one photo was my feet in shocking-pink kitten heels, and some were of food, and the whole feel of it was warm and messy and fun."  The Nigella Bites series won Lawson a Guild of Food Writers Award. She went on to write her second book in 2000, How to be a Domestic Goddess, winning her the British Book Award for Author of the Year. 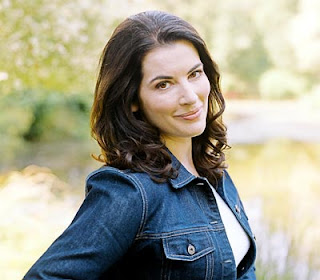 It was at this point in her career that that illness struck her family. Her husband John died in 2001 after battling cancer for over four years. She had also lost both her mother and sister to cancer in the late 90's. Grief is never over, she maintains.
Back to work, Nigella repeated her successful TV series and book formula in 2002, with 'Forever Summer'.
Nigella married the art lover and collector, Charles Saatchi, in 2003.
'Nigella Feasts' aired in the US in autumn 2006 and she then signed a contract with BBC for a three-part series 'Nigella's Christmas Kitchen', which aired weekly in December of 2006. This show enjoyed record ratings and Nigella was awarded a second World Food Media award in 2007.
We all enjoy watching her and as a result, her career continues successfully.

"Men like to look at her, women want to be her. She's the woman who has it all - the career, the children, the looks, a rich art dealer for a husband, her own TV show. She is a media celebrity, much photographed, everything from the death of her first husband to her waistline pored over by the press. She loves food, doesn't torment herself dieting, and mostly gets away with it."

Nigella comments:
On Mirrors: "I am not a mirror person," she says. She only ever looks at herself a small section at a time, and then only if she has to, as when doing make-up. "Why would you want to look in the mirror? If you feel good about yourself, go on that, because you're never going to look as good as you feel. And when you feel bad about yourself, you don't really want to have any evidence."
On cookbooks: I am a complete food book junkie. I now have over 4,500 food books and I love reading them.
On celebrity: "When people call me a celebrity chef, I just feel like I'm going to commit suicide." Strictly speaking, Nigella isn't a celebrity chef because she isn't a chef. But she is at very least a celebrity cook. No, she suggests, that's wrong. There's something different, finer, more philosophical, to what she does. There is so much more to food than food, she says. "Food is about how people see themselves, it's about life. The thing I liked about writing about food when I started it was that I felt I was writing about food in a different way. Not like a food writer."
On Eating: “I love eating, I adore food and when I’m not cooking I’m probably thinking about it, but that doesn’t mean to say that I eat indiscriminately or incessantly. I’m not a constant grazer, I like to sit down and have a meal, I eat food that’s delicious, but I do fall down on portion control. I eat very healthily; I just eat for five healthy people…”

These muffins sound wonderful, don't they? And they look good too. I've always loved Welsh Rarebit and this was such a novel idea for a brunch muffin I couldn't resist. Unfortunately, I was disappointed with the recipe. A couple notes: increase the cheese in the muffin batter to 3/4 cup. And find a really fine sharp English cheddar. I used an American sharp cheddar, probably not the best choice. The muffins just didn't have enough flavor. No zip. I'll try them one more time using not only more, but a finer quality cheddar. And perhaps increase the dry mustard a tad.
Welsh-Rarebit Muffins
Recipe courtesy Nigella Lawson 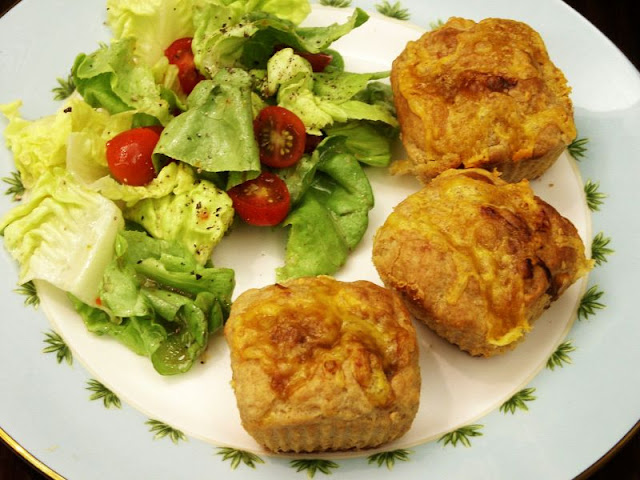 Ingredients:
For the muffins:
1 1/2 cups self-rising flour
1/3 cup rye flour
1 teaspoon baking powder
1/2 teaspoon baking soda
1 teaspoon salt
1 teaspoon English mustard powder
Generous 1/2 cup grated sharp Cheddar
6 tablespoons vegetable oil
1/2 cup plus 2 tablespoons plain whole-milk yogurt
1/2 cup whole milk
1 egg
2 tablespoons Worcestershire sauce
For the topping:
2 tablespoons grated sharp Cheddar
Worcestershire sauce, for garnish
Special equipment: 12-cup muffin pan lined with 12 paper baking cups
Method:
Preheat the oven to 400 degrees F.
Mix the flours, baking powder, baking soda, salt, mustard powder and cheese in a large bowl with a fork. In a large measuring cup, beat together the remaining ingredients. Pour into dry ingredients, mixing lightly with your fork, remember that good muffins are made from lumpy batter.
Pour into muffin cups and cook for 20 minutes, then quickly take them out of the oven and put a little cheese and sprinkling of Worcestershire sauce on each one. Put them back in the oven for another 5 minutes, and then put the muffins on a baking sheet to cool. Eat them while they are still warm but not hot. 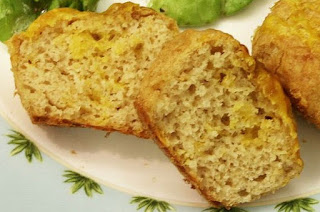