We're now more than half way through Gourmet's list of Game Changers and while choosing a recipe to feature, once in a while you happen upon an absolute gem, one that really stands out.....one you're going to make again and again. For me, this tart is IT. And don't for a minute think it's your ordinary tomato tart. Oh no. It was slightly time consuming to make, but after that first bite, it was one of those roll your eyes moments...Mmmmmmm....savoring the ambrosial flavors. A drizzle of vinegar highlights the caramelized tomatoes and garlic in this, yielding an intense, savory tart to serve with crisp greens as a first course or light main dish.
Just to make it easier, Anne suggests using frozen puff pastry.
It's always rewarding when you tell me you've made one of these recipes and loved it, but this time, you've simply got to make this tart at the first opportunity. It is perfection.

But first, let me tell you a little about Anne Willan.

British-born Anne Willan was raised in a life of privilege. She graduated from Cambridge in 1959 with a master's degree in economics. But that life was not for her. Encouraged by an early employer while teaching at a finishing school, she took classes at London's famed Cordon Bleu cooking school. Then, after graduating from that school, she went to Paris to finish her studies, earning the coveted Grand Diplome in 1963.

Ms. Willan put an ad in the International Herald Tribune: "Cordon Bleu cook will give lessons and cook for dinner parties". One of the replies was on embossed stationery from the Château de Versailles. Willan remembers that it said: "I have Mexican cooks. I am starting to entertain at the Château de Versailles so I want my cooks to learn French cooking. Please come to see me." The note was from the American-born philanthropist and socialite Florence van der Kemp, whose husband was the curator of Versailles. Willan started out by giving twice-a-week cooking classes and wound up living at Versailles,in an attic over the servants' quarters.
While working for Van der Kemp, Willan cooked for the duke and duchess of Windsor, Prince Rainier and Princess Grace of Monaco and the flamboyant Countess Mapie de Toulouse-Lautrec. At one party, a guest was Cherniavsky, a young World Bank economist. The two fell in love and when Cherniavsky was transferred to Washington, D.C., Willan followed him and moved to New York. With the assistance of Van der Kemp, she landed a job as an editor at Gourmet magazine. She married Cherniavsky a year later and moved to Washington. For the next decade, the two went back and forth between the U.S. and France.During this time, Ms. Willan edited Cordon Bleu's 20-volume Grand Diplome Cooking Course encyclopedia.
In 1975 she opened La Varenne in Paris. In 1982, she and Cherniavsky bought Château du Feÿ, near the town of Joigny in Burgundy and in 1991 they moved the school there. Her intention for La Varenne, she says, was to offer the culinary equivalent of a college education. Willan became an authority on the cooking of France and its' history.
Willan's husband's poor health prompted a move back to the US, to Los Angeles. "We always thought we'd end our days in France. But I think we'll be fine. This is such a great place for food. It's a wonderful place to cook. The ingredients are outstanding, and there is so much going on. I do miss the cheese, though."
Ms. Willan has written a couple dozen well-received cookbooks, including two that have become culinary bibles: "La Varenne Pratique" and "French Regional Cooking." To read about Anne's books, click here.
Anne was elected to the Who's Who of Food and Beverage in America in 1986 and was honored in 1995 as Grande Dame of Les Dames d'Escoffier International. In 1999, the International Association of Culinary Professionals recognized Anne with their prestigious Lifetime Achievement award. 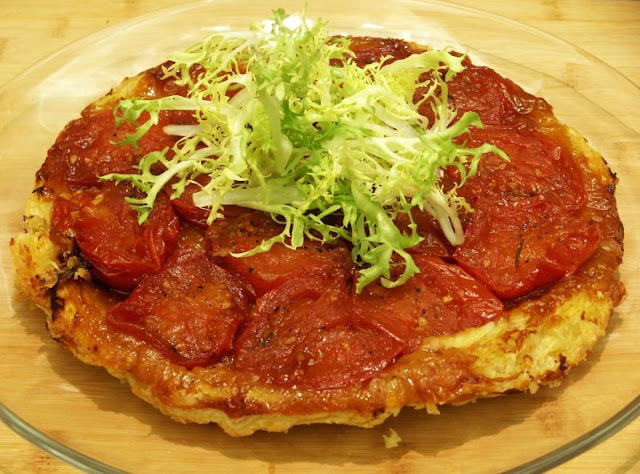 Method:
Heat the oven to 275°F/140°C. Sprinkle the cut sides of the tomatoes with salt and pepper and set them aside. Sprinkle the sugar in a large frying pan with an ovenproof handle and cook over medium heat, stirring occasionally, until the sugar melts and toasts to golden caramel, 3 to 5 minutes. Take the pan from the heat and at once add the vinegar, standing back as it will sputter and fume. Return it to the heat, stir to dissolve the caramel, and then stir in the oil. Again take the pan from the heat and add the tomatoes, cut side down, packing them tightly so they all touch the bottom and pushing the rosemary and bay between them.

Roast the tomatoes until they are very tender and wrinkled, 2 to 2 1/2 hours. Forty-five minutes before they are done, add the unpeeled garlic cloves to the pan. If liquid remains at the end of cooking, evaporate most of it by cooking the tomatoes briefly over high heat, taking care they do not scorch.

Oil a second frying pan with an ovenproof handle and transfer the tomatoes to it, arranging them snugly cut side down in a pattern. Discard the herbs and leave the garlic behind, along with any juices, in the first pan. Add the wine to the garlic and heat it, stirring to deglaze the juices and boil them down to 2 to 3 tablespoons. Pour the liquid and garlic through a strainer over the tomatoes, then push through the garlic pulp. Set the tomatoes aside to cool. The tomatoes may be cooked up to a day ahead and stored in the refrigerator.

Heat the oven to 400°F/200°C. On a floured work surface, roll out the puff pastry to a 10-inch/25-centimeter round and prick the dough so it rises evenly. Transfer it to the pan to cover the tomatoes and tuck any excess dough down around the fruit. Bake the tart until the dough has risen and is crisp and golden brown, 15 to 20 minutes. Let the tart cool for 5 minutes, then turn out it onto a platter and garnish with the arugula. Alternatively, let it cool in the pan, then turn it out and serve it at room temperature. Tarte Tatin à la Tomate may also be cooked up to 8 hours ahead and kept in the pan. Warm it briefly in the oven before turning it out.

Claudia - Journey of An Italian Cook
Posted by Barbara at 5:38 AM