This is the first Game Changer post on a blogger. It ought to be interesting for the next month because for some reason, Gourmet listed four of them in a row.
I'm of two minds about including them on the list; have they had the experience and been involved in the culinary world long enough to be included on this impressive list of 50 world-wide game changers? And if so, do you think four spaces on a list of 50 is just about right? Can you imagine the debate that went on about this?
Of course real talent should be recognized and rewarded no matter the age. Everyone has to start someplace and these girls began blogging for fun, just as we have, and their blogs have resulted in successful (probably surprising themselves as much as anyone else) careers.

The food blogs have amassed an enormous internet audience and their influence is spreading through the entire culinary landscape, whether the old guard likes it or not. And let's face it: a lot of them do look down their noses at bloggers; they better get with the program as food blogging is here to stay and will continue to grow. (Remember what Julia Child said about Julie? “Julia said, ‘I don’t think she’s a serious cook.’ ”) So I think the best of the bloggers deserve recognition, but I did give a thought to other innovative women chefs who were ignored. I'd be willing to bet if I asked my daughter if she knew who Clotilde Dusoulier was she would say no. She's a foodie, a super cook, but not a food blogger. It's an interesting conundrum, isn't it? (And no, she'd never heard of her.)

So our first food blogger Game Changer is Clotilde Dusoulier. She certainly qualifies as being young (early 30's) but as well, you can't deny she has become an influence in the culinary blogging world. Her Chocolate & Zucchini blog is widely read and Clotilde has made a big name for herself. I doubt when she began blogging, she would ever have imagined how her life would change.

Clotilde was born and raised in Paris, where she studied to become a software engineer. Following graduation she worked in the Silicon Valley for a couple years and this is when her interest in food and cooking began. When she returned to Paris in 2003, she started her blog, Chocolate & Zucchini. Its success led to a second career in food writing. She eventually gave up her engineering job to try a writing career full time. Four years after she began blogging, she published a book based on her blog. Then another in 2008. She also worked to update the classic of French cookery, first published in 1932 called I Know How to Cook, Je Sais Cuisiner.  And now, her most recent, a book she has edited called The Art of French Baking which is to be released in November.
Her hopes for the future? A family seems to be foremost, more books and she'd like to mentor young talent. 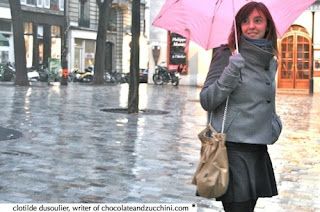 Now for those of you thinking this recipe for fregola and zucchini sounds familiar, it is. I've posted it before and it's worth repeating. A lot. I serve it frequently and it's always a big hit. Creamy, nutty and cheesy and altogether fabulous. And when I first saw it posted on Chocolate & Zucchini years ago, fregola was new to me, so in addition to a great recipe, I was introduced to an unusual pasta that I continue to use often.

A month or so ago, I had company coming and I paired this dish with quail fromD'Artagnan. What a perfect dinner. 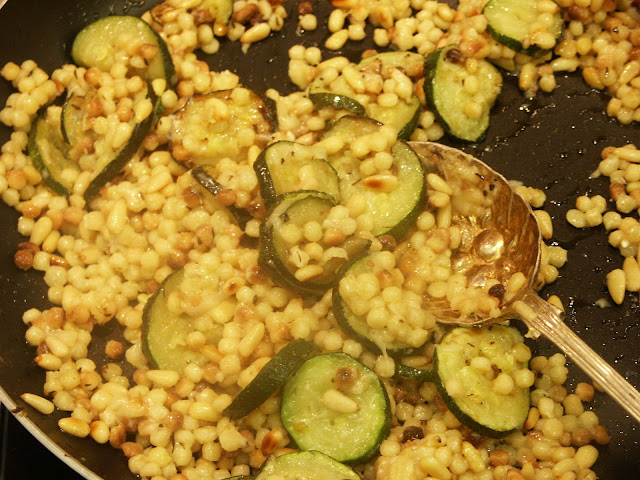 Wash and slice three zucchini very thin. Sauté in a bit of olive oil, with herbes de provence to taste and just enough salt to bring out the zucchini flavor. Add the fregola and pinenuts. Grate liberal amounts of parmesan on top and mix in. Serve warm. Serves 2 with leftovers for lunch.

How I cooked the quail:

Preheat the oven to 350 degrees
Season the quails with salt and pepper. In a large oven-proof saucepan, heat the canola oil on high heat and grill the quails in canola oil on all sides until brown. Finish cooking them in the oven for approximately 8 minutes.