First of all, let me introduce you to vanilla bean paste. If you don't have this in your pantry, you should. Vanilla bean paste is much thicker than vanilla extract; it's actually a thin syrup. A bottle of it at Williams Sonoma  is $11. That may sound like a lot, but it isn't. This little bottle goes a long, long way.

And I used it in this friand recipe for our end-of-year Garden Club luncheon last week. The recipe is quite similar to one for financiers that I made last year. The word "friand" seems to be used in Australia and New Zealand for a pastry that is based on the Frenchfinancier. The difference? Australian and New Zealand friands often utilize flavorings other than vanilla and also use fruit and/or nuts, which the French version does not. They are also baked in oval shapes.

This particular recipe, from Donna Hay magazine, did not call for vanilla (I added it anyway) but did call for raspberries to make them a touch more summery. They also suggested using fluted tins. They aren't too sweet and I love this fluted shape. They were a big hit at the luncheon. Besides, how simple can a recipe be? And all in one bowl too! Sprinkle some powdered sugar on top for the final touch. 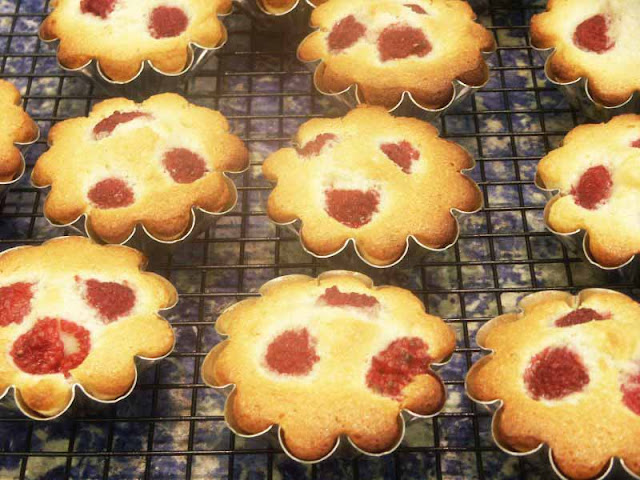 Brush softened butter in each of the fluted tart tins and then place in the freezer for a while. Makes it easier to remove the friand.
Place almond flour, sugar, flour, baking powder, egg whites and butter in a bowl and whisk until smooth. Spoon mixture into fluted tart tins, top with raspberries (I pushed them into the batter a bit) and bake for 20-25 minutes or until golden. Makes 12.