(Be sure to enter my St. Patrick's Day giveaway HERE.)

Finally, after a year, I'm getting around to posting my mother's (and her mother's) rhubarb pie recipe. Sorry about the delay. It's not that it's such an uncommon recipe, but many other recipes call for tapioca or some other fruit like strawberries along with the rhubarb. Not my mother's recipe. She was a purist. She'd pick it out of the garden and we'd have it stewed for lunch and a pie for dinner.

I love her recipe, but wanted to put a bit of a twist on it. Last year, a couple blogs posted some mini pies made in those wonderful Ball jars. The small ones. (Take a look HERE and HERE.) It was such a cute idea and I have always loved individual desserts like this, so I thought it might be fun to take Mother's whole pie recipe and turn it into individual servings.

It was a success flavor-wise...in fact a smashing success. And fun to eat. However, when these cooled, the fruit had shrunk about 1/2 inch below the crust. I noticed cherries and apples were used in the blogs I mentioned above and they probably don't shrink like rhubarb does. Still, I remain completely enchanted with these little Ball jar pies and will continue to make them with rhubarb; if you're as determined as I am, here's how to avoid some of my problems: be sure the pie crust is sealed to itself and not the jar so the shrinkage won't be quite so noticeable; another suggestion would be to pile the rhubarb up higher in the center which should also help. In addition, if you find the juices run over or leak through the crust, it will make it difficult to remove the pie in one piece from the jar. So just serve it in the jar, which is really a cute presentation.

I made a couple jars with the crust on the top only, wanting to see the fruit through the sides of the jar. We thought it was fun served like that and there is less pie crust to deal with.....both in terms of pressing it in the jar and in calories.  :)  Obviously you have to serve it in the jar if you make it this way. The rhubarb was nice and red and looked pretty peeking through the sides of the jar.

As far as ingredients are concerned, here's mother's rule of thumb for a making a rhubarb pie: for every cup of sliced rhubarb, there should be 1/4 cup sugar and 1 tablespoon flour. And when you make the crust, use shortening. Not butter, shortening. I use Crisco. (I suspect she and her mother used lard in their crusts.) Please note that while I made mini pies for this post, the recipe below is for one regular pie. 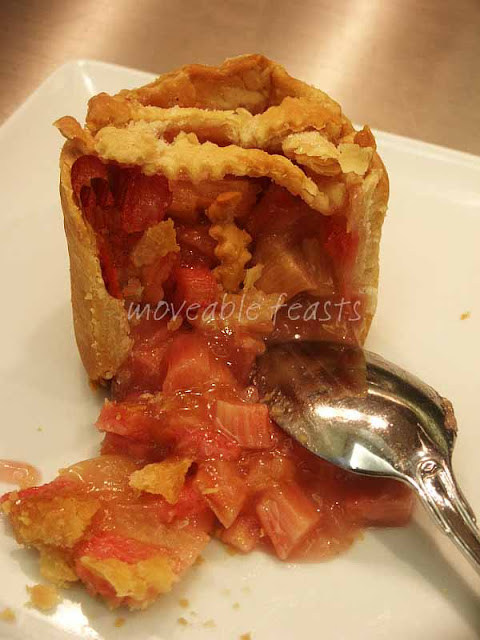 Ingredients for the crust:

Ingredients for the filling:

Method for the crust:

Preheat the oven to 425 degrees. Make the crust: before measuring the flour, stir it to leaven with air and then measure out 2 cups. Combine the flour, salt and sugar in a large bowl and fluff with a fork. Cut the shortening into the flour with a fork or pastry blender. Stop as soon as the sheen of the shortening disappears and the mixture is a bunch of coarse pieces. Sprinkle a tablespoon of ice water at a time over the dough, lifting and tossing it with the fork. When it begins to come together, gather the dough, press it into a ball and then pull it apart; if it crumbles in your hands, it needs more water. Add a teaspoon or two more water, as needed.

Gather the dough into two slightly unequal balls, the larger one for the bottom crust and the smaller one for the top. Flatten the larger ball, reforming any frayed edges with the sides of your hand. Dust with flour and roll the dough, starting from the center and moving toward the edges. Take a knife or thin spatula and quickly work its edge between the crust and the counter top. Lift the dough to the side; dust the dough and counter top with flour. Roll again until the diameter is an inch or 2 larger than that of the pie pan. Lay the rolling pin a third of the way from one of the edges. Roll the crust onto the pin and then unroll the crust into a 9-inch pie pan and press it into place. Place in the freezer.

Method for the filling:

In a large bowl, blend the rhubarb, sugar, flour and cinnamon. Pour into the crust-lined pie pan. Dot with butter.

(If you are going to make the mini-pies, cut the dough to fit the jar...there is a lot of crust when you make these. Work with it, flattening it as much as you can to fit the sides. And then just pile in the rhubarb and top it with a lattice crust.)

For a single large pie: roll out the top crust. Dab the rim of the bottom crust with water to create a glue. Then roll out the top crust and cut it into strips and interlace the pieces to form a lattice top. Bake for 15 minutes; reduce the temperature to 350 degrees and bake 25 to 30 minutes more, or until a bit of pink juice bubbles between the the lattice strips in the crust. Serves 8.  (Time will vary if you use the individual jars.) With pies like this, the juices always run over, so line a pan with foil before baking.