Quesadillas are a perennial favorite with everyone, but they can be really messy to eat. And if everyone's either sitting around watching the game, or standing at a cocktail party, spills will happen. Phoebe and Cara at Big Girls, Small Kitchen have a solution: Mini Corn and Leek Flautas.

Flautas, which means "flutes", usually refers to a flour tortilla that is rolled up around a filling and deep fried. As opposed to Taquitos which are a corn tortilla rolled in a similar fashion with a filling of beef, chicken or cheese and fried until crisp. Flautas are sometimes rolled to be narrower on one end, resulting in a long, narrow cone shape, like a flute. But the main difference is that usually Flautas are flour tortillas, and Taquitos are made of corn tortillas.

Phoebe and Cara came up with a mini flautas version, so easy to eat, and a super combo of ingredients. (You could certainly use your own imagination for fillings.) Also, they didn't want to deep fry, so they baked them in a hot oven. I'd say it was a huge success. Mine weren't as picture-pretty as theirs (I tried to cram too much filling in), but they were yummy, crunchy and dipped in a lovely cilantro lime crema, everyone loved them. 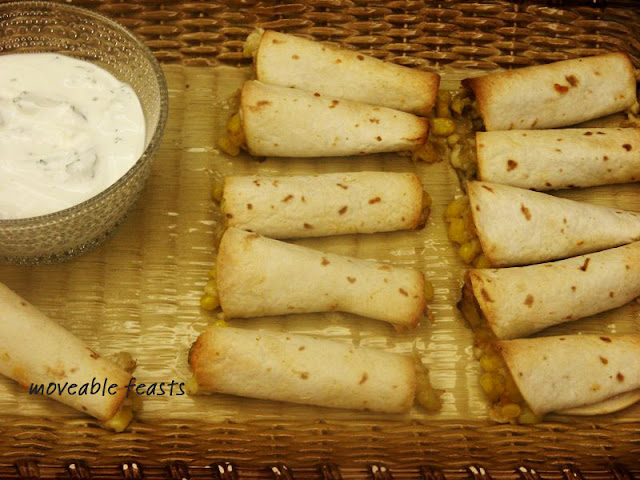 Method:
Preheat the oven to 425 degrees.

Using a 3-inch round, cut each tortilla into 5 smaller rounds.

In a medium mixing bowl, combine the cheeses, leek mixture, corn, cumin, salt, and cayenne and toss to combine. On a clean work surface, brush each round with a little bit water. Place 1 tablespoon of filling in the center of each round, and roll together so the edges overlap (they should look like mini tacos, and the water will help the edges bind). Place the flautas seamside-down on a cookie sheet lined with parchment, about 20 per sheet.

Bake the flautas in the oven for 10 minutes, until the tortilla is nicely browned, and the cheese is bubbling. Allow the flautas to rest on the cookie sheets until cool enough to touch. Arrange on a platter and serve immediately with some sour cream or cilantro-lime crema for dipping.

Bench note: you can bake the flautas in advance, and then reheat them in a 400 degree oven until they recrisp. Makes 80 flautas. 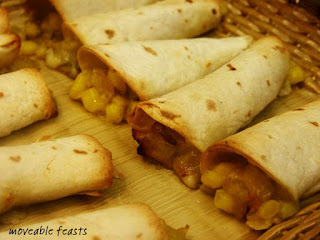