I've been hearing about scallion pancakes for ages, have enjoyed them countless times, read a while back about them on Dorie Greenspan's blog and have always wanted to make them at home. But this is one of those recipes I kept putting off as I knew it would take an entire afternoon after reading Dorie's comment about patience.

When I think of Chinese cooking, breads don't usually come to mind. But of course, they do make breads...for one, think of steamed pork buns.....and another, these scallion pancakes. They are a unique flatbread in that they are pan-fried, but made from a dough that's kneaded and shaped rather than  poured. You don't use a wok, you use a non-stick skillet for frying.

Beause I have a copy of A Spoonful of Ginger, I went to the original recipe and finally spent a rainy afternoon making them. If you're going to give them a try (and oh so worth it) read through the recipe carefully; it's not that they're hard, they're not. Easy as pie actually, using simple ingredients you probably have in your kitchen right now. It's just there's a lot of resting between steps and you want to allow time. And once you have your little patties, you can refrigerate or freeze them for future use.

Flaky Scallion Pancakes
From A Spoonful of Ginger by Nina Simonds 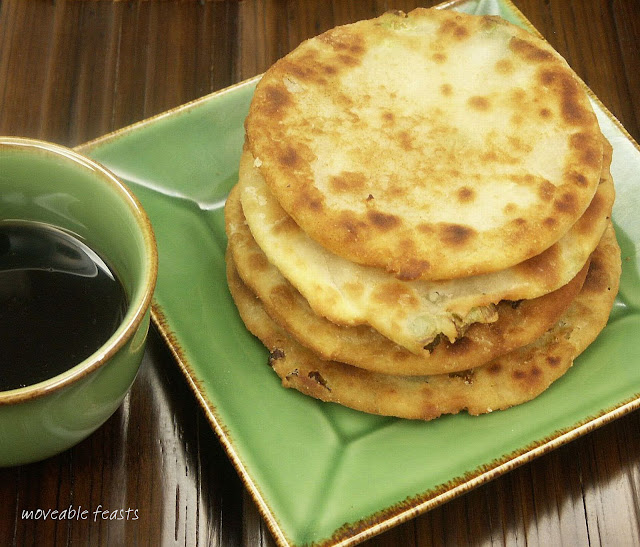 
Stir the flours and salt in a mixing bowl with a wooden spoon.  Add the corn oil and the boiling water, and stir until a rough dough forms.  If the dough is too soft, knead in about 1/4 cup more flour.  Turn the dough out onto a lightly floured surface and knead for 5 minutes, or until smooth, kneading in more all-purpose flour as necessary.  Cover with a cloth or wrap in plastic and let rest for 30 minutes, or longer if possible.

On a very lightly floured work surface, roll the dough into a long snakelike roll about 1 inch in diameter.  Cut the roll into 24 pieces.  Keep the unused dough covered with a damp towel as you work.

With a rolling pin, roll out one piece of dough, cut side down on the work surface, into a 5-inch circle.  Brush the top with a little sesame oil and sprinkle with some of the minced scallion greens.

Roll up the circle like a jelly roll and pinch the ends to seal.  Flatten the roll slightly with the rolling pin, and coil it into a snail shape, with the seam on the inside.  Pinch the end to secure it and set aside on a lightly floured surface.  Prepare the remaining pancakes, and let them rest for 30 minutes uncovered.

Reflour the work surface and roll each coiled pancake out to a 4-inch circle.  Place them on a lightly floured tray.  Let them rest for 30 minutes uncovered, or longer if possible.  Preheat the oven to 200 degrees F.

Heat a large, heavy skillet, add the oil, and heat to 350 degrees F.  Put a few of the pancakes in the pan, not touching, and fry over medium heat, turning once, until golden brown and crisp on both sides, about 2 to 3 minutes.  Remove with a spatula and drain briefly in a colander, then transfer to absorbent paper.  Arrange the cooked pancakes on a cookie sheet and keep them warm in the oven while you fry the remaining pancakes, reheating the oil between batches.  Serve immediately or keep warm in the oven.
Makes 24 pancakes.


General Dipping Sauce for Japanese Gyoza, Scallion Pancakes (or just about anything)

Method:
Combine ingredients and serve.
Posted by Barbara at 6:38 AM