Back in the 50's there was a restaurant in Ft. Lauderdale called Tuna Gardens. Odd name I know, but they made a Key lime pie to kill for. It was my first introduction to a “real” Key lime pie. Every Sunday we would have a baked, stuffed chicken from Keese’s and Key lime pie from Tuna Gardens. Those pies were made the way Key lime pies were supposed to be made: graham cracker crust, a yellow filling made with condensed milk, eggs, limes and topped with a meringue. One would think: end of story. Not really.

The Key lime pie became Florida’s official state pie in 2006 but very few people really know how to make one. Think about it: how often have you had a Key lime pie with a meringue topping? Bakers say a meringue pie takes too much time to make, is hard to make, takes up too much refrigerator shelf space and has too much waste potential etc. etc. Excuses, excuses.


So here's a bit of pie history: the first key lime pies were made over 100 years ago in Key West with whole pelican eggs- without a meringue top. Later, Key West homemakers switched to chicken eggs and discovered that the whites ruined their pies. Since nothing was wasted, the homemakers added meringues to the pies to make use of the egg whites. Condensed milk (invented in 1856) was used because of the lack of fresh milk and refrigeration until the arrival of tank trucks with the opening of the Overseas Highway in 1930. But condensed milk turned out to be a successful necessity: it makes the pies really smooth.


Things suddenly changed. A hurricane in 1926 wiped out the Key lime plantations in South Florida; growers replanted with Persian limes which don’t have the thorns of the Key limes and are easier to ship with their thicker skins. The Key lime became scarce. The name survived on menus, but most of the pies were made from Persian lime juice, which lacks the acidic ying needed to balance the sugary yang of the condensed milk. In these photos, the Persian limes are obviously the larger ones. 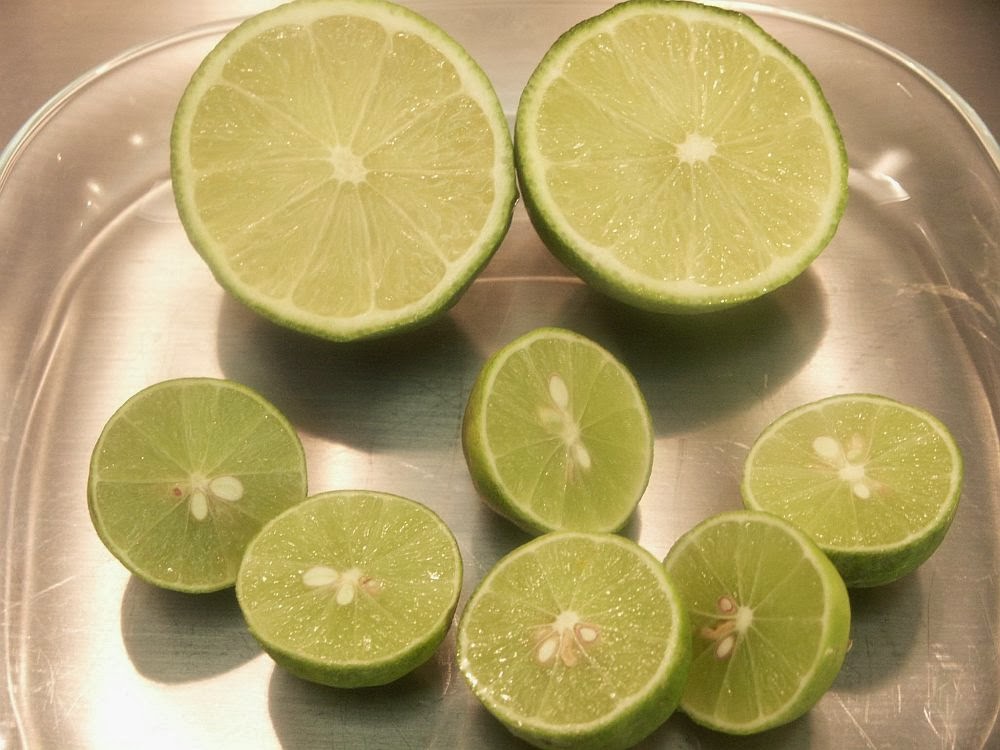 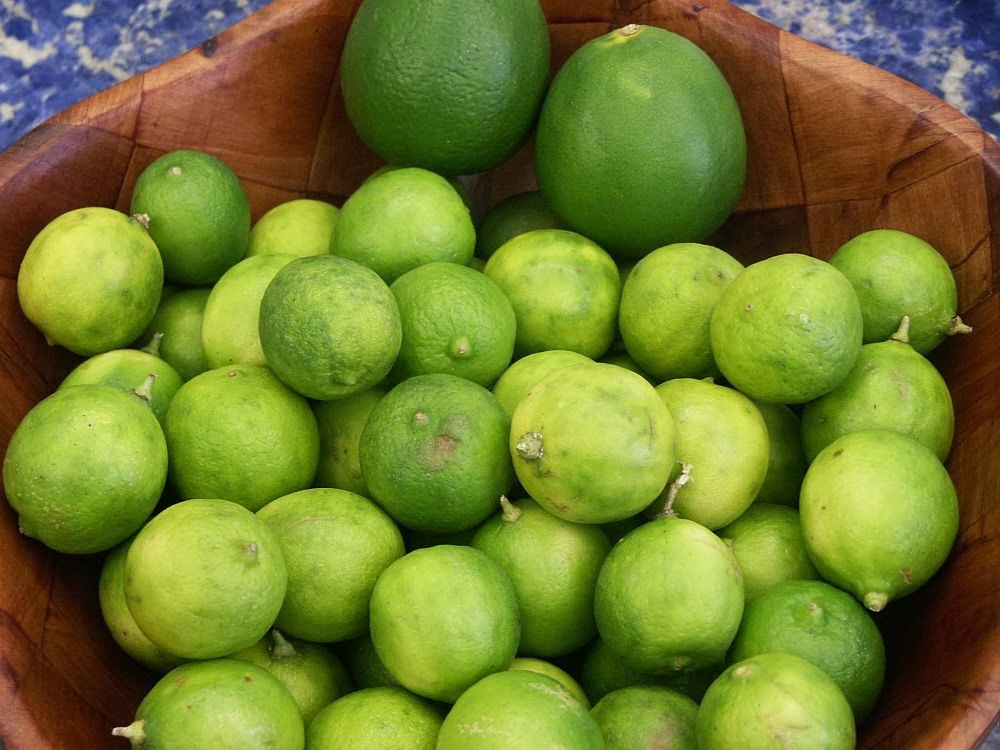 We were in danger of losing the “real” Key lime pie. Enter the boom in New American cooking and once again, everything changed. As is always the case, the scarcity of Key limes led to a demand for them. Top chefs demanded fresh fruit, no matter what the price. And those little Key limes became important again, even if they were a pain to juice. Very few Key lime trees are grown in the actual Keys, and those that are, almost entirely in backyards, never leave the islands. Some 10% of Key limes sold in the U.S. are now grown in southwest Miami. And the other 90%? They are imported mainly from Mexico or Guatemala. Why? Money, basically. We couldn't compete with the Central Americans, who have cheaper land and cheaper labor.


So now that Key limes are available, what’s up with the debate? Well.....Key lime pie aficionados argue on and on about the proper way to make one. Graham-cracker or pastry crust? Meringue on top or whipped cream, or neither? Cooked or uncooked filling? These kind of debates are meant to be prolonged, not resolved, but among the Key West natives (also called Conchs), there is a basic agreement: a real Key lime pie never contains gelatin and never, ever contains green food coloring. There are only three essential ingredients for the filling: egg yolks, lime juice and condensed milk, beaten together. That’s it. Not quite as simple as boiling water, but close, which is part of the charm of the thing.


I had been making the real Key lime pie for years but much as I loved it, I always found the pie to be too densely sweet; the sweetness needed to be cut just a bit. One day I discovered another recipe in a fabulous old cookbook: A Jug of Wine by Morrison Wood. I baked it and was completely converted. My father, the purist, always sneered at my “new” pie because not only did it not have a meringue, it didn’t (scandalous!) have a graham cracker crust either. Mr Wood suggested beating the egg whites and folding them into the lime juice, yolk and condensed milk mixture making it more of a Key lime chiffon pie. Can't help it, I loved it. I guess that makes me a traitor.
Dad told me I should know better.
(Nonetheless, he ate my pies.)


Oh well, you can decide for yourself….. but Morrison Wood’s pie is better! 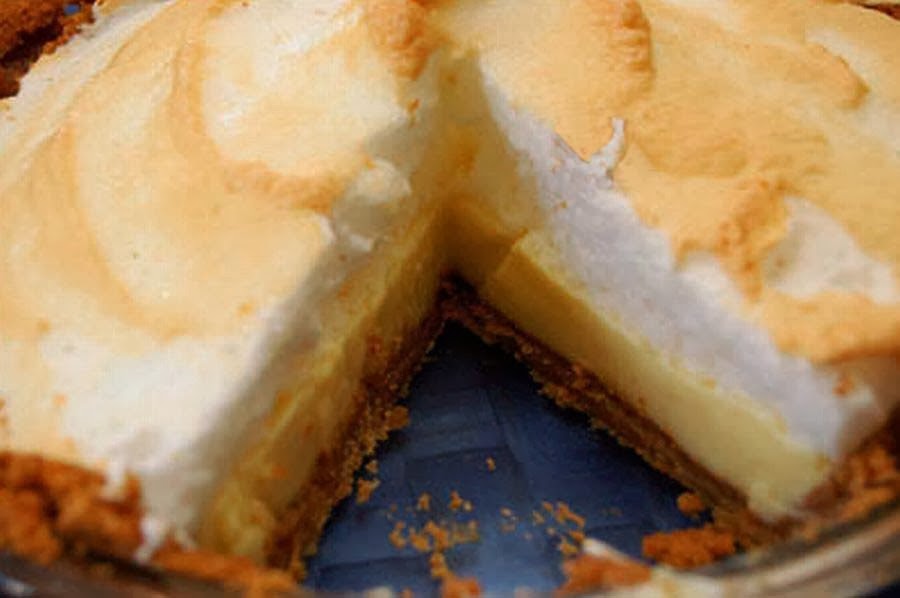 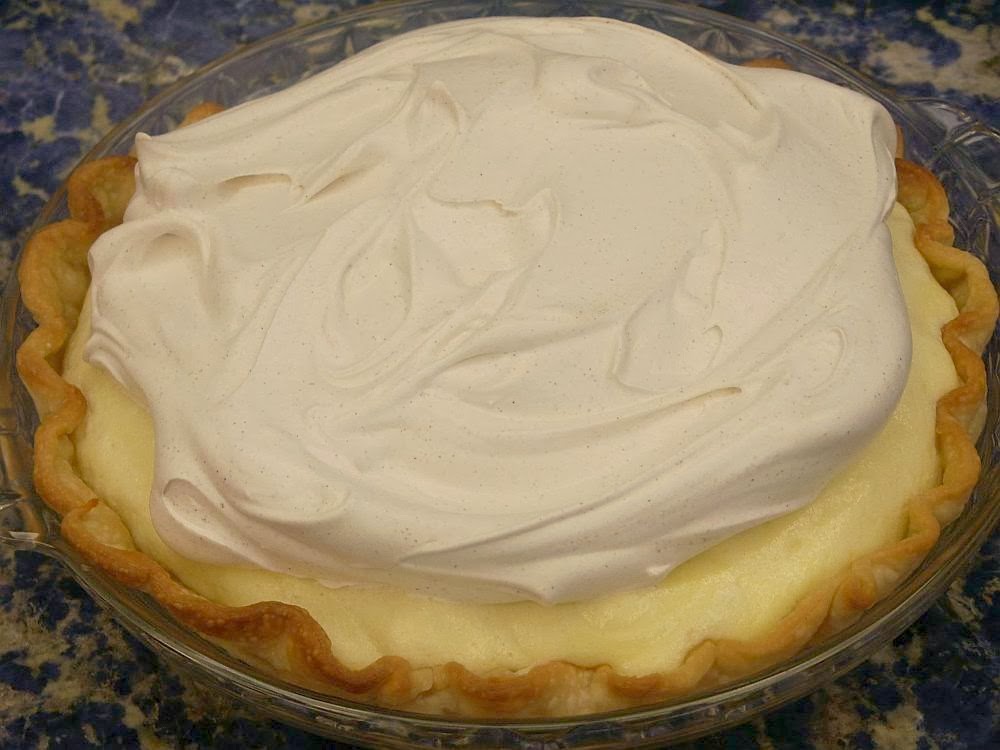 
Method:
Mix together the condensed milk, the lime juice and the beaten yolks of 3 eggs. Beat the whites until stiff and carefully fold in. Place the mixture in a good flaky prebaked pie shell and bake in a 250° oven for 10 minutes.
Cool and then place in the refrigerator. When ready to serve- whip the cream, add a little bit of sugar (not much), a sprinkle of cinnamon and the rum. Cover the pie with the whipped cream mixture. Should serve 6, but it is so delicious, 4 could finish it.
Posted by Barbara at 1:28 PM