You probably won’t believe me, but I recently bought a cookbook solely on vegetables. When I mentioned this to a friend, she looked at me strangely and told me I was badly in need of a vacation. Well I’m sorry, but I think good vegetable recipes are hard to find.

I’d seen a recipe for bok choy someplace, made it, loved it and at the end the article said: “Credit where it’s due.” and named Jack Bishop as the recipe’s creator. And his book? Vegetables Every Day. I ordered it used via Amazon for $2. (Sometimes I wonder if the shipping charges on used books cancels out the savings; on the other hand, my local book store probably hasn’t had this one for years, if ever, and certainly not for $2.00.) I read it cover to cover- which validates my friend’s suggestion re vacations- and marked several recipes to try. But mainly, I learned a lot. Mr. Bishop devotes a chapter to each vegetable- with details on seasonal availability, different varieties, what to look for when buying and then follows each introduction with recipes. I am slowly cooking through my choices and so far only once was a recipe a disaster. Or more likely, I simply didn't like it.


Every time I plan a dinner, I rack my brains for vegetable side dishes; anything other than my boring old standbys. Doesn't everyone? But I am here to tell you one thing: there are a bunch of winners in this cookbook- the guy is brilliant. And really knows vegetables. So, as this is the week my granddaughter is here, I am going to experiment on her. I can imagine the look on her face if I told her what I was doing. I’m not too worried about this artichoke recipe though. It’s like eating potato chips, except healthier.


It was a great big pain to make- I have to be honest. Cleaning the artichokes: not fun. Ouch. But once you get to the center- what a sweet treat. And it really goes fast once you get rolling. You don’t need to waste the leaves if you’re an artichoke fan- just steam them. But the heart- that’s the gem. You just put up with the leaves to get to the center anyway. Or I always did. I’m going to give you great directions and photos. You’re going to love this……


Crispy Artichoke Hearts(Adapted from Vegetables Every Day by Jack Bishop) 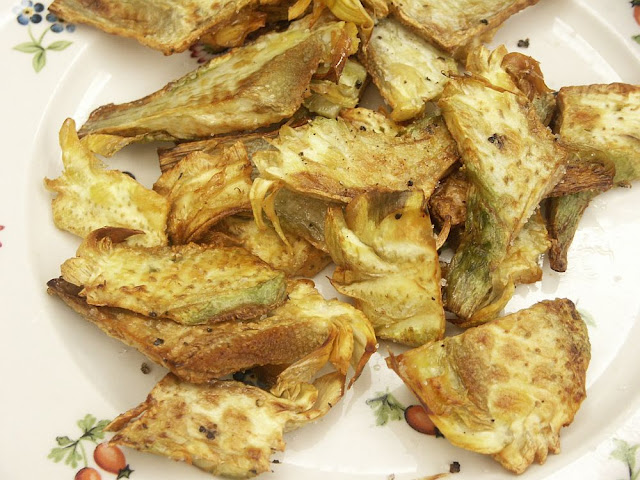 
Method:
Fill a large bowl with ice and water and squeeze the juice of two lemon halves into it, dropping the lemon halves into the bowl. The other lemon halves will be used to rub over cut surfaces as you prepare the artichokes.
Take the first artichoke- bend back and snap all the leaves off. 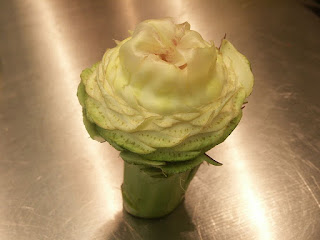 Trim the end of the stem with a paring knife and with a vegetable peeler shave the outer layer of the stem. Remember to rub the lemon over any cut areas. Cut the artichoke in half lengthwise. Use a paring knife to trim any dark green leaf bases that surround the stem. You can see in the photo below I have done half of it. 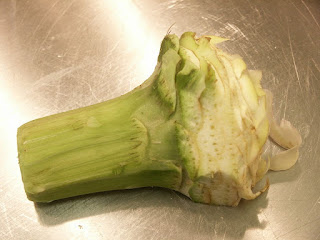 Pull out any remaining spiky inner leaves and using a grapefruit spoon or knife, cut away the fuzzy choke. 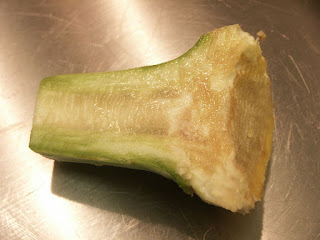 Rinse under cold water to flush out any remaining hairs and put the choke in the ice water. Repeat this process with the remaining artichokes. 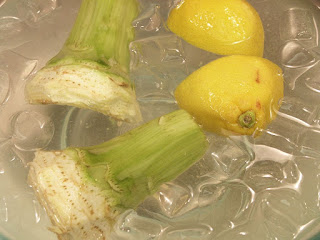 Work with one artichoke at a time; remove it from the water and cut it lengthwise into strips about 1/4 inch thick. Put the strips back into the ice water. Repeat until all the artichokes have been sliced.
Place the oil and whole garlic cloves in a large skillet. It's important for the skillet to be large so the artichokes aren't piled up in the pan. Bring the heat up and then lower it to medium. Drain the artichokes well and pat them dry.

Drop them into the oil and cook, stirring often, until the artichokes turn crisp and brown, about 10 minutes. Don't cook them over high heat because they will brown before they soften.
Remove and discard the garlic cloves. Drain the artichokes on paper towels and season them with salt and pepper. Serve immediately. This recipe serves 4. You can use these crispy artichokes as a side dish or as a snack.