Thanksgiving 2008 is a memory and my home is again quiet. Sometimes I like it, sometimes not. Our holiday dinner was a huge success even with a small disaster in the kitchen. Well, OK. It did not seem a small disaster at the time, but as always, in retrospect, it was not without its amusing side. If we can't laugh, what else is there? The sink chose a perfect moment to clog up and not drain at all about one hour before dinner was served. We weren't worried about dinner, because it was ready to be served. Unfortunately, all I could think about during dinner was: how will we manage the clean-up without running water? And I mean in the sink AND the dishwasher. Unfortunately, this drain also housed the garbage disposal which was working fine if indeed the water would not back up into the sink. With the "use no chemicals in your garbage disposal" ringing in our ears, we tried a plunger; we called neighbors who just might have a more workable and recently purchased plunger, one with a flange that would create a better seal ; most people were out for the holiday but one kind soul came over with his plunger, only to discover it was the same as ours. Old. One of my sons tore himself away from football long enough to get in the car and search for anything open where a plunger might be found. No dice. So we relaxed and had a dinner to be thankful for; we ate and drank (we can be forgiven for perhaps imbibing a bit more than usual knowing what was to come), enjoyed our food and family and put off the final moment: pots, pans and dishes.


We scraped out what we could and the boys came up with the idea of going outside to use a hose to rinse out the pots and pans. It is compost, after all. After refrigerating what we could, we washed glasses in a pan and dumped the remains in a toilet and put as much in the dishwasher as we could, optimistically assuming it would be usable the next day. We left things to soak overnight; I sprayed for ants liberally around the kitchen. And then we shut the door and put it out of our minds until we could call a plumber the next morning. Yes, all's well that ends well. Potato peels were the culprit and I received a brief lecture on running water long enough when using my disposal.
I hope your dinner was as delicious as ours. Surprisingly, one of my sons had asked what I was serving for dessert and when I said I had decided on a pumpkin flan, he asked if I would make a bread pudding. Not something I would normally do when I am serving cloverleaf rolls AND stuffing, but saw no reason to say no. He had it recently at a restaurant and wanted to taste mine- which had to be better, right? It was. It has an interesting history and I will give you the recipe next week as I took a super photo of it.


Anyway, I have mentioned before that every Thanksgiving my family asks me to include a brussel sprout dish that has now become a tradition. I have no idea where I originally found the recipe, probably some cookbook or magazine and I have even less of an idea why I would ever serve this dish as my family is not overly fond of brussel sprouts. But back in the days when I would have 12 to 16 people for dinner every holiday that came along, I was desperate for new ways to make vegetables. It was such a hit now my family insists upon it.

It has lots of Parmesan, garlic, prosciutto and cream and is altogether delicious. You can get the kids to slice the sprouts and then turn on the kitchen fan full blast as it emits a strong odor while cooking. What I like is I can make it the day before, let it cool a bit, cover and refrigerate and the next day bring it to room temperature and bake. Trust me, you will adore this. 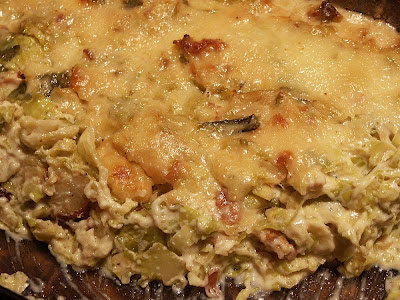