We had a discussion about homemade bread after a meeting I went to last week: how much we all loved fresh bread, how our mothers and grandmothers thought nothing of making it on a regular basis. Now, rarely does anybody take the time to make homemade rolls or bread; it's understandable as life has become so very complicated. Everyone is busy with work and family and general day to day living leaves us with little energy at the end of the day. If you have free time on a weekend, are you going to spend it kneading bread? Probably not. And yet while making bread from scratch is more time consuming than buying it, there's just no comparison between rolls that come out of a plastic bag and rolls that come out of your own oven. And need I add: freshly baking bread is a heaven-sent bouquet. How about trying it on a rainy Saturday?

My grandmother and her sister owned a bakery in Detroit for many years when they were young women. In later years, Grandma spent several months of each year living with us and all we could think of walking home for lunch was what was going to be on the table. Long Johns? Fried noodles? Fresh bread? Rhubarb pie? My grandmother made them all- and perfectly too- I recognized that even as a child. Naturally my mother was an excellent baker as well and she passed her abilities on to my sister and I.


Surprisingly, my recipe for cloverleaf rolls did not come from my grandmother or mother; I found it in a bread book that was given to me just after I was married. The book was put out by a flour company- I don't recall which one. I made most of the bread, roll and sweet roll recipes in that book at some point or another over the years. The cookbook is long gone, but I saved my favorite recipes and the cloverleaf roll recipe in this cookbook is delicious. The rolls are slightly sweet and tender as can be. And surprisingly easy to make. I like to make them entirely by hand, including the kneading. Kneading by hand is worth the effort: you can feel the texture of the dough change right under your hands. No mixer, you really don't need one. Mixing and kneading take very little time; most of the time is spent in rising, so plan to make them when you have other things to do around the house. I now make these once or twice a year and serve them for Thanksgiving or Christmas. There is just something comforting about cloverleaf rolls; they remind me of..... home. And guess what? They freeze beautifully. 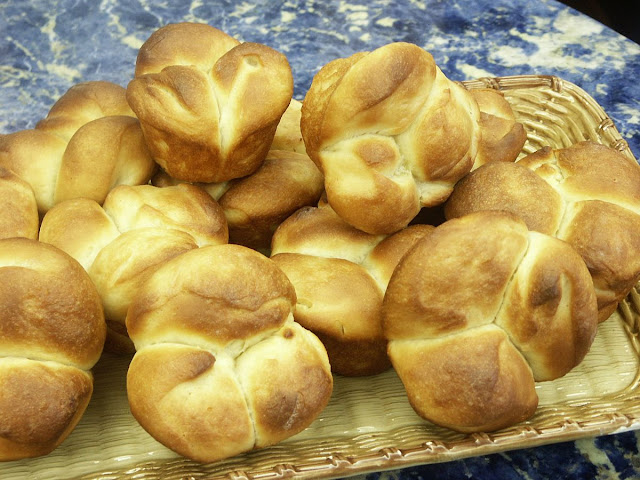 
Method:
Place the milk in a saucepan and place it over heat. Before it boils and when a skin forms over the top, remove it from heat and cool it to lukewarm.


Dissolve the yeast in the warm water. Stir in the milk, sugar, salt, beaten egg, shortening and 2 cups of flour. Mix by hand; it will be a very sticky dough. Add flour until the dough holds together. Turn it out on a floured board and knead for at least six minutes, adding flour as needed. (Fold the dough in half and use your body weight to push the dough into itself. The beginning of the kneading process might require a lot of flour. Be generous to start, but try not to add more than the dough can easily incorporate, or you will throw off the flour-yeast-water-salt ratio. Give the dough a quarter turn (90 degrees). Grab the other side and fold it in half. Again, with a lot of weight behind it, push the newly folded half into itself. Repeat this process until the dough is smooth, silky, and elastic.)
Place the dough in a greased bowl, flip it over once so both sides are greased. Cover and let rise in a warm place for about 2 hours or until doubled in bulk.


Punch down, divide in thirds, then each of those in half. You will need to make 36 one inch balls by rolling them between your palms. Grease a muffin tin well and place three little balls in each one. This recipe should make 12 largish rolls.

Brush the tops lightly with melted butter and let the rolls rise again until doubled.