Do those three names sound familiar? They didn't to me. These people ARE Foodspotting. I know this series is about women game changers, but Mr. Grubb was there at the beginning (even before Soraya Darabi), so I think he deserves to be up there in the title as well.


What exactly is Foodspotting? It's a smart phone app and website that allows users to post and discover nearby mouth-watering restaurant dish recommendations through photographs.

Whose idea was it? Foodspotting was an idea formulated by Alexa Andrzejewski as a result of not being able to find good Okonomiyaki (Japanese pancakes) in San Francisco. Before launching Foodspotting in January 2010, Alexa was a User Experience Designer for Adaptive Path, where she helped both startups and enterprises craft great experiences through strategy, research and design. Her first food-related venture was making and selling miniature food for American Girl dolls when she was 8.
Alexa's basic idea was to make a field guide to global food. To learn about bootstrapping (Bootstrapping is starting up an enterprise, especially one based on the Internet, with minimal resources.) her project, she joined Women 2.0 and started aggressively networking, talking about her plan to catalog restaurant dishes.

She then met programmer Ted Grubb, who had been working as a designer & developer since the late 1990s. Before Foodspotting he helped start multiple companies including Get Satisfaction, where he built its friendly face and high quality user experience from the ground up. Ted thought Alexa's idea was a good one but thought this should be made into an app for smartphones.

"People love to photograph their food, and share their great meals with friends," Andrzejewski says. "So we put a name on that phenomenon: Foodspotting."

They soon met and added New York media darling Soraya Darabi—who loves food, travel, photography and emerging technology and was an early foodspotting devotee. She became an advisor to the company and is now a co-founder. Soraya previously worked for Epicurious.com, but most notably The New York Times where she successfully launched the social-media presences of The Times and created digital partnerships for them with platforms including Facebook, YouTube and Twitter.

Despite initial investor skepticism, and nine months of bootstrapping, the trio was able to raise $3 million in funding from BlueRun Ventures. That's allowed the company to expand to ten employees: two in New York City, and eight in an open-air-café-inspired office in San Francisco's SoMa neighborhood. To stay connected bi-coastally, Skype and SocialCast are open constantly on everyone's computers. Currently, it's developing partnerships with companies, such as The Travel Channel and Zagat, which uses Foodspotting photos on its website and has compiled guides—and created a badge users can earn—for Foodspotting.

In 2010, Alexa and Soraya shared a spot on The Daily Beast’s “Women Who Rule the Web” list. 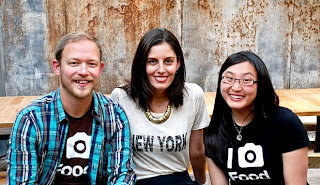 How does Foodspotting work?  You can join their website, but their free iPhone app is what you'll use most. Once you feed your location in, it comes up with photos of some dishes at restaurants in your specific area. This was somewhat successful, but I was discouraged by some of the restaurant choices and had to force myself to think in terms of the dishes themselves, which is what Foodspotting is all about.
A city search of my town didn't come up with much. No question but the larger the city, the more variety, which makes perfect sense. So when I met my son in Ft. Lauderdale for dinner, we tried again. We entered specific (you can't be too general here) food items like Beef Stroganoff, salted caramel ice cream etc. Choices came up. Restaurants we were familiar with, but don't frequent; we've lived here a long time and know the restaurants pretty well in this area. After some research, we soon realized it was common for one person to upload multiple photos, frequently of dishes from the same restaurant, which led us to believe this hasn't caught on quite yet.
If you were visiting NYC, for example, would you ask Foodspotting for a specific dish? I wouldn't. I'd want to know how the restaurant in general was rated. But I admit I can see what Alexa meant...if I was craving rhubarb ice cream in NYC, it wouldn't hurt to give Foodspotting a shot.

But here's my problem with Foodspotting.....exactly who is selecting the dish to photograph? Does this person eat out a lot? Is he or she well informed about cooking and food? Will we share the same tastes? Why should I take their word for anything? Even if the photo looks enticing, it all comes down to who's doing the tasting. I'm skeptical. I realize Foodspotting is in its infancy and needs a LOT more input from foodies. Which it's probably getting this week via our game-changer group.

I noticed one of our favorite restaurants, Café Maxx in Pompano Beach, FL., has a couple recipes on Foodspotting. Several years ago, we were there for Christmas Eve and one of the dessert choices was a Gingerbread Trifle. It was sensational. I asked one of the owners, Darrel Broek, if he would get me the recipe. The pastry chef was nice enough to email it to me and I made it for the blog. Because it was in 2009, I bet you won't remember it, so I'm posting it again. It's a multi-layered recipe...not difficult, just time consuming. But so worth it. I've served it several times over the holidays. Of course, Foodspotting wasn't in existence when it was served at Café Maxx, but it's exactly the kind of recipe that ought to be included. 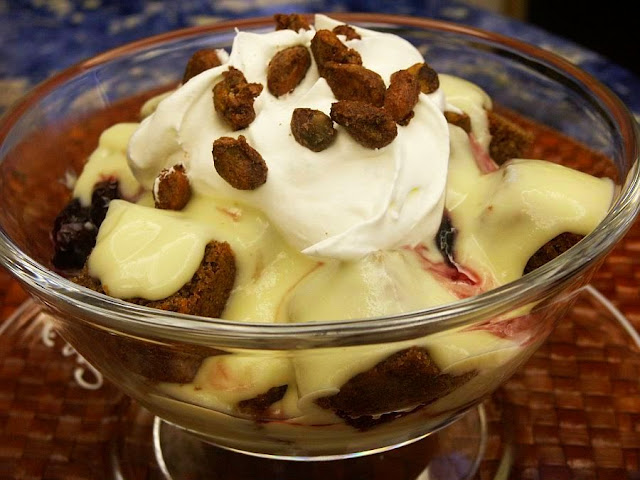 Method:
Preheat oven to 350°. Butter two loaf pans and sprinkle lightly with bread crumbs.
Combine the melted butter and half and half. Beat the sugar and eggs until very thick. Add the dry ingredients. Add the butter mixture to the flour. Mix. (It will be a very runny batter.) Bake for about 45 minutes. 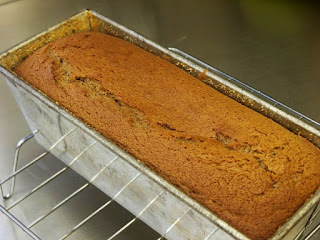 Method:
In a saucepan, heat the milk and sugar.
In a mixing bowl, whisk the eggs, yolks and cornstarch well. Temper the milk into the eggs and return to the heat. Whisk briskly until the mixture has thickened. Quickly, remove from heat and pour into a mixer bowl, using the paddle attachment. Add the diced butter and vanilla and beat until somewhat cool. Put into a container and cover with plastic wrap, making certain the plastic wrap touches the custard top. Refrigerate until ready to use.

Method:
Pit the cherries and put all the ingredients in a saucepan over medium heat.
Cook about 20 minutes. Cool, put into a covered container and refrigerate until ready to use. 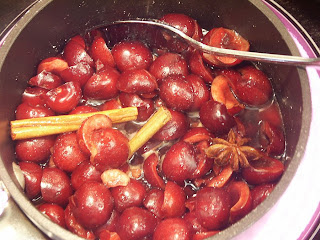 Method:
Preheat oven to 350°.
Whisk the first three ingredients together, add the nuts and toss. Lay out on a parchment paper lined baking sheet. Bake until you can smell the nuts.

To Assemble the Trifle:
Cut the gingerbread into 1 inch cubes and toast. Layer the pastry cream, spiced cherry sauce and gingerbread in a glass dish. Top with whipped cream and sprinkle with pistachios.