Catherine "Cat" Cora was born in 1968 in Jackson, Mississippi.  Her father Spiro was Greek and Cat grew up around the restaurant industry with both a father and grandfather in the business. Her Greek national heritage, and southern Mississippi roots have resulted in a creative and unique blend of influences. Cooking and eating were the center of her young life; meals at the Cora house often combined spices from the South with fresh cheeses and home-cured olives sent by relatives from the island of Skopelos.

Although her serious interest in cooking began as a teenager (at the age of 15, Cat had developed a business plan for her own restaurant), after high school, she pursued a traditional college degree in Exercise Physiology at the University of Southern Mississippi. Julia child was an early mentor and encouraged her to leave Mississippi for New York, where she followed her dream and attended the  Culinary Institute of America in New York’s Hyde Park.

Then came some real-time training which included a series of chef jobs in New York under the guidance of notable chefs like Anne Rozensweig and Larry Forgione.  She also made a career stopover in France where she was worked with Roger Verge, chef/owner Le Moulin de Mougins, and Georges Blanc, chef/owner of Georges Blanc restaurant.

After returning to New York again, Cat became sous chef at The Old Chatham Shepherding Company under Chef Melissa Kelly. Next she headed West to Northern California, where she served as Chef de Cuisine at Napa Valley's Bistro Don Giovanni. 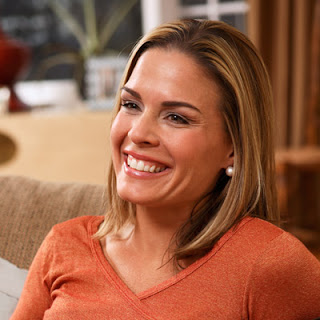 Cat made her TV debut in 1999, as co-host of Food Network’s Melting Pot with Rocco Di Spirito. She went on to host My Country My Kitchen: Greece, Date Plate, and was one of the featured hosts on Fine Living’s Simplify Your Life. A documentary, Cat’s In The Kitchen, was also made about her first James Beard dinner in April, 2002.

In 2005, Cora was tapped as the first female Iron Chef on the Food Network’s popular Iron Chef America Show.  Chef Cat Cora's appearances as an Iron Chef has made her a household name.  She has three cookbooks to her credit titled, Classics With a Twist, Cooking From the Hip, and Cat Cora’s Kitchen (which was her first and was inspired by her Greek and Southern heritage and contains many of her family’s favorite recipes). She also boasts a line of branded products that includes cookware, knives, wooden utensils, and cutting boards.

Cora expanded on her passion for food by forming Chefs for Humanity.  The charitable organization founded by Cora is a grassroots coalition of chefs and culinary professionals guided by a mission to quickly be able to raise funds and provide resources for important emergency and humanitarian aid, nutritional education, and hunger-related initiatives throughout the world.

I've always wanted to make an olive oil cake and with her Greek background, I thought this would be a great choice for a Cat Cora recipe. I wasn't thrilled with the result, not that it didn't turn out exactly the way it was supposed to, but I guess olive oil cakes are not going to be on my favorite dessert list. I cut way back on the olive oil after reading comments on the recipe; no need for more. 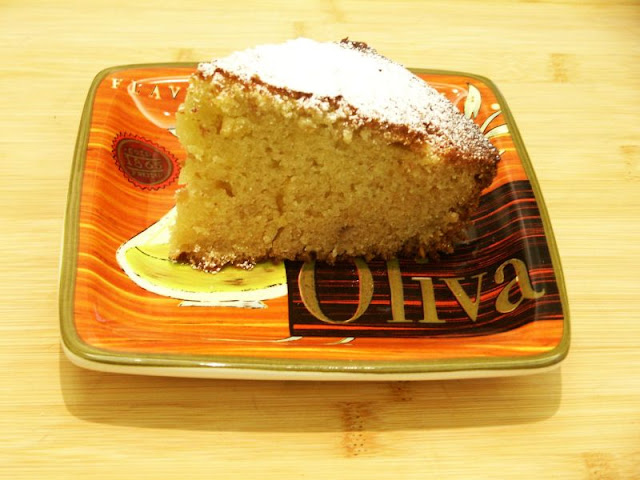 
In a large bowl, whisk together the eggs, sugar, olive oil, milk, liqueur, orange juice, and lemon zest. Sift together the flour, baking soda, baking powder, and salt. Mix the dry mixture into the wet mixture. Whisk until well blended.
Fold in the almonds.
Pour the mixture into the buttered cake pan. Bake for 1 hour. Place on a rack to cool. Run a knife around the edges and place it on a plate. Sprinkle with powdered sugar and serve. 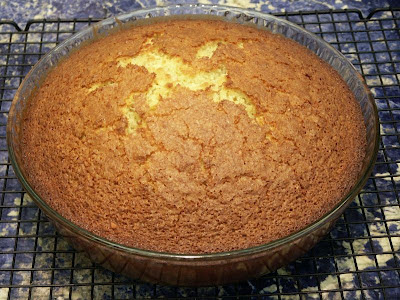