Ruth Rogers was born in America and Rose Gray in Great Britain. It's always fascinating to learn how two women, neither of them trained chefs, got together to open such a fabulous restaurant. Their backgrounds certainly didn't point in that direction.
Ruth attended Bennington College and the London College of Printing where she got a degree in graphic design. Later, she moved to Paris with her husband and worked on exhibitions at the Pompidou Center. Rose attended Guildford College of Art, where she gained a BA in Fine Art. She taught art at a state-run school in East London and then started a business making paper lampshades.

The two first met in 1969 when 21-year-old graphic artist Ruth turned up at Rose's home with her husband. Although they saw each other occasionally, Rose and Ruthie's extraordinary partnership still lay almost 20 years in the future.

In the early 80's, Ruth and her husband moved to Tuscany. It was here that Rose began to take a serious interest in Italian cuisine. Then, in 1985, while her husband's exhibition was shown in New York, Rose received an invitation to cook there at a newly opened fashionable Italian-style restaurant, Nell's Club. She found she loved it.

On her return to London, she worked a while at Carluccio's and it was at this time that Rose and Ruth's paths crossed again. The story is that Ruth's husband had set up his office in Hammersmith, and he wanted someplace for everyone in this area to eat. Rose said: "From the beginning we had huge ambition for the River Café, it was just restrictions on the premises that forced us to start small."

No matter how it began, Ruth proposed the idea of a restaurant to Rose. And so The River Cafe was born in 1987. (Ruth on the left, Rose on the right) 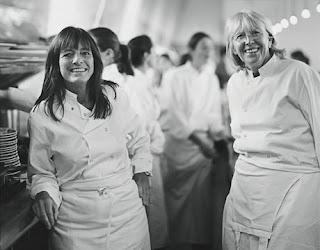 Their partnership was close; their uncompetitive and generous spirits became the guiding force of the restaurant. Ms. Gray was a maternal presence and a dynamo in the kitchen; a number of well known chefs passed through their kitchen on their way to celebrity. They focused on fresh ingredients and authentic Italian country dishes; their wine list was entirely Italian.
Both Rose and Ruthie were self-taught. Ruth said: "Women who used to want to cook went into catering or they gave dinner parties for rich businessmen. The chefs and the managers in the River Café are 50% women. I'm really proud of that."
The River Cafe earned a Michelin Star in 1998. And kept it.
Ruth and Rose published their first cookbook in 1995 which led to a TV series. They have published 10 cookbooks since then. Both were awarded MBE's in 2010.

Sadly, Rose was diagnosed with breast cancer in 2001 and passed away in 2010.

I chose to make Chocolate Nemesis. The exact definition of nemesis is:  one that inflicts retribution or vengeance and truer words were never spoken. How The River Cafe manages to plate it (I've eaten there but for some reason did not order the "nemesis") I don't know, but there are lots of problems with this cake and I can only tell you how I got it to work.
First of all, a little bench note: the full recipe below easily makes enough for two cakes. So halve the recipe and you'll have plenty for one. (Although as it turned out, I was relieved to have enough batter to make the second one......as I truly messed up the first one!)

When the cakes had fully cooled, which is done while the cakes remain in the bain marie and in the oven, I removed them and cut into the first one. It collapsed into a puddle (a rather delicious puddle, but a puddle nonetheless) and I partially blame the foil liner. If I make it again....which I doubt 'cause I'm not a chocoholic....I will line the bottom of the pan only. It resembled a pudding/cake rather than a cake and we enjoyed eating it, but still, it was nearly impossible to cut into any kind of neat wedge.

So I turned to the Internet and did some research on this cake. One person inverted it onto a platter. I can't imagine how that would work, considering the puddle problems I had with the first cake and wondered if her recipe was different in some way. Perhaps she cheated and added flour? Another refrigerated the cake over night. Now that sounded like a sensible plan so that's what I finally did.
When it was fully chilled, I cut the cake in wedges, placed them on serving plates and let them come to room temperature before serving. It worked. It's unbelievably rich and you need the creme fraiche or some unsweetened whipped cream to cut the sweetness. It's rather like eating candy, so don't cut big slices!
The River Café’s Chocolate Nemesis 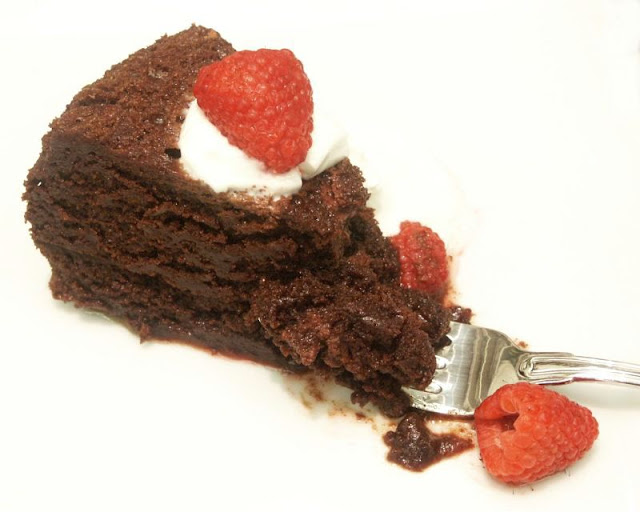 Method:
Melt the chocolate and butter together in a bain marie. Remove from the heat and allow to cool. Preheat the oven to 160 C or 320 F and line a 27cm springform cake tin with foil.

Beat together the eggs and sugar with an electric mixer for five to eight minutes until they’ve quadrupled in volume. Fold the chocolate and butter mixture into the eggs and sugar and stir thoroughly. Pour the mixture into the prepared cake tin. Either I beat this too long or my springform wasn't large enough because I had too much batter and made one regular spring form pan and one small one and still had a little batter left.

Place the cake in a large roasting tin in the oven, then pour enough boiling water into the tin to rise 3/4 up the side of the cake. Cook in the preheated oven for over an hour, then turn the oven off and allow to cool completely before removing. Serve with crème fraiche and raspberries

Claudia - Journey of An Italian Cook